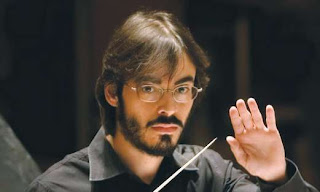 Ilan Volkov has landed the post of Chief Conductor of the Iceland Symphony Orchestra.  Iceland punches bigger than its size as there's a lively new music scene. Over the next three years Volkov's conducting a total of 25 weeks, but even better, he gets to start a new festival of new music.

Says the Director of the Iceland Symphony, "Ilan is among the most exciting conductors of his generation and we are thrilled that he has accepted the position...under his artistic leadership, the Iceland Symphony Orchestra will continue to secure its place among the finest and most progressive orchestras in Northern Europe ... The stunning façade of Harpa - Reykjavik Concert Hall and Conference Center - is designed by visual artist Olafur Eliasson and is sure to become an iconic image for the region".

The new concert hall, which opens in May, would have been planned in the heady days when there was money aplenty in Iceland. Yet in times of austerity, sometimes intregrity survives when glitz fades away. Volkov's got integrity and maybe the energetic Iceland scene will be bracing. Volkov's still conducting the Israeli Opera and BBC Scottish and guesting all over Europe. In the past I was lukewarm about his work, though he's respected by many, such as Susanna Mälkki. But two concerts he conducted at the 2010 Proms were extremely good. He was so much invigorated I wondered what's he on? I think it was the orchestras, the London Sinfonietta and Birmingham Contemporary Music Group, who are specialists in their field.  Read more here : Volkov conducts Cage and Feldman (contender for best Prom) and conducting Bedford, Benjamin etc. I hope Iceland gives him good service. (Photo : Simon Butterworth from ICA)
at January 15, 2011