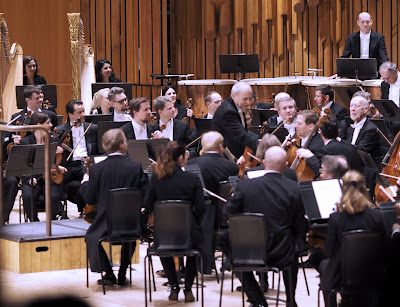 Ádám Fischer and the Vienna Philharmonic Orchestra in Mahler Symphony no 9 in the Barbican Hall. A gala occasion !  Unmissable, even though the Vienna Philharmonic comes to London nearly every year.  Their sound is unique - playing so burnished that you want to weep with sheer joy.  Live performance is infinitely more of an experience than listening to recordings. Live you can sense the interaction between players as the performance unfolds, and pick upon intangibles that enhance your engagement with what's evolving before your ears.  Musicianship is a lot more than technical sound quality!  The Vienna Philharmonic are a good  Mahler orchestra and their playing can, and has, added depth and richness to this symphony before, many times.  Ádám Fischer's a good Mahler conductor too.  So what was missing ?

"The very first bars of Mahler’s Ninth seem to falter", read the Barbican publicity blurb. Oddly prophetic. The Andante is comodo, a comfortable pace, but here "comfort" overtook pace.  Perhaps someone had taken the rest of the Barbican blurb too literally, which continued "The stricken composer put the rhythm of his failing heart into the orchestra – and began  his Ninth Symphony with a sigh of farewell". The idea of Mahler’s 9th as a symphony obsessed with death may have been fashionable for a while in the 1960's and 70's but it simply does not sit with the composer's output as a whole. Nearly everything Mahler wrote dealt with the annihilation of the creative spirit, for which death is an obvious  symbol. But in nearly ever case, he defeats death by creative transformation. Consider Das Lied von der Erde: "Allüberall und  Ewig/Blauen licht die Fernen!Ewig... ewig.....".  Professor Henry Louis de La Grange's lifetime contribution to Mahler studies demonstrates that there was a lot more to Mahler than maudlin neurosis : that clarity of vision and intelligence made him the artist he was.  And now we have what remains of what would have been Mahler's Tenth Symphony,  the once fashionable approach to the Ninth cannot be sustained.

But back to Fischer and the Vienna Philharmonic.  The first movement seemed to meander, without the sense of purposeful direction that so often underpins Mahler's music : consider how often his symphonies incorporate marches oif some form or other.  Here the first and final movements form pillars holding up the structure of the symphony. That sense of overall architecure is the foundation of the symphony.  Fortunately, though, the sheer virtuosity of the players in the Vienna Philharmonic was of such exceptional character that one could marvel at the playing, its elegance and warmth offsetting all else. This does make a diffrence. Any symphony is built on smaller component units where the particular combination of instruments sharpens focus.  We can listen to this symphony any time, but not often with such sheer beauty and poise.  Every desk seemed to contribute : the  communality of ensemble made this performance seem like chamber ensemble writ large.  Every desk had something to contribute - exceptional prinicpal flute, wonderful "soloists" all round. It's not often that the piccolo player can be heard as a star turn !

The second movement Im Tempo eines gemächlichen Ländlers was better articulated overall.  Here the players of the Vienna Philharmonic showed theiur understanding of the idiom. For all their finesse, they understood why dance "is" vigour, energy channeled into purposeful co-operation.  Mahler 9 as ballet, in the sense of short, well-executed episodes which fit together to form a coherent whole. Waltz is Ländler in more sophisticated form.  Thus the Rondo-Burleske cut through the bonhomie like a scythe. "Death" here suggesting frost before harvest. The brass attacked with a chill, the strings flying, with well defined vividness.  The performance ignited, for a while, but the Adagio could have had a stronger sense of purpose.  Wonderful strings, vibrating with feeling, but not hyper-ventilating : if the movement depicts a living organism its breathing should be steady. I loved the low timbred winds and brass against the ascending string line.  This final movement can dissipate into ever more refined, more transparent, until audible sound becomes one with eternity.  The Vienna Phil has the ability to create such miracles better than most.  Perhaps not so this time where it proceeded without the inspiration that can make this symphony feel like a powerful force of life.  So this didn't quite have the architecture this symphony needs, but with playing as exquisite as this, it hardly mattered !