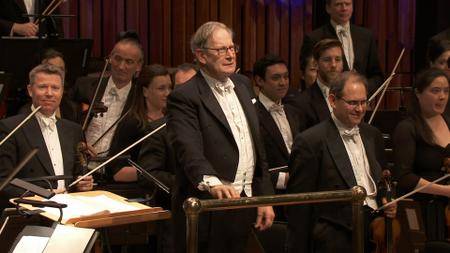 John Eliot Gardiner conducted the London Symphony Orchestra in the third concert of their Schumann series at the Barbican Hall, London.  A coherent programme - Carl Maria von Weber Overture to Euryanthe, Mendelssohn Concerto for violin and piano (Isabelle Faust and Kristian Bezuidenhout) building up to Schumann Symphony no 3 (The "Rhenish"). This is what "historically informed performance " means: understanding music as music, in context and on its own terms.  Respecting the composer as far as possible, not smothering him with a fire blanket of audience expectations.  Nothing wrong with expectations formed in the 1950's and 60's for something to put on the brand new turntable. But there's so much more to music than that. Gardiner shows how fresh and vital Weber, Mendelsssohn and Schumann can sound, nearly 200 years after they were "new".

Weber's Overture to Euryanthe began with vivid attack. The early Romantics were fearless, exploring audacious new ideas.  There's nothing timid about the opera Euryanthe. Indeed its bizarre plot makes it almost impossible to stage (fire-breathing dragons, long before Wagner). All the more reason we must appreciate the technical limitations with which Weber created the drama. Natural horns : reminding us of a time when people hunted in order to eat, where Nature represented danger. That the strings have to try harder is the whole point !  The solo violin melody reminds us how vulnerable mortals are against the unknown, yet bravely they persist. That also justifies the practice of getting the musicians to stand while playing. It's not novelty. The sound is subtler and more human.  Modern audiences need to get over being conditioned to very late performance practice and much larger forces and respect what went into the music in the first place. Conductors stand throughout a performance, and if Gardiner, who is 75, can do it, most players can. The greater freedom of movement comes through in greater freedom of expression, and greater engagement between members of the ensemble, who seem to listen to each other more than they might do otherwise.

That aesthetic of chamber communality also informs Mendelssohn 's Double Concerto for Piano, Violin, and Strings in D minor, MWV O4 (1823), where the LSO were joined by Isabelle Faust and Kristian Bezuidenhout.  Mendelssohn was just fourteen when he wrote this, but its restraint connects to his background and to the influence of his grand-aunt Sarah Levy, a musician whose recitals championed the music of Bach.  Bezuidenhout played a pianoforte from 1837 by Sébastien Érard, with leather hammers covered in felt. "There is a textural topography to these instruments" said Bezuidenhout in an interview before the concert, which is well worth listening to on the replay of the livestream here, because he demostrates with examples. "Every register has a characteristic voice....moving from bass to tenor, and above, where the piano sounds similar to the harp".  Mendelssohn worked so closely with the instrument that Bezuidenhout believes that it shaped his compositional processes, allowing him to experiment with what the instrument could offer.  Hearing the Érard did make a diffrence. Textures were lighter and livelier, colours brighter and more nuanced.  Faust's playing (a 1724 Stradivarius) picked up on the greater freedom and vivacity,  which in turn extended to the orchestra.  Altogether a unique experience, further proof that well-informed performance practice can be revelation.

A vigorous Schumann Symphony No. 3 in E-flat major, Op. 97,(1850). Given the central position of song in Schumann's ouevre, his sensitivity to poetry and visual images and his very personal identification with the Rhine, it is wise not to underestimate the programmatic aspects of this symphony, even though this might not appeal to modern assumptions about what a symphony should be.  Indeed, one could suggest that Schumann's Third inhabits a place from which we can consider his search for new forms of music theatre, evolving from oratorio Das Paradies und die Peri  (Op 59, 1843) (please read more here) to Genoveva (1848)  (read more here)  an opera that is more Weber than Wagner.  Is Schumann 3 music theatre in symphonic form ?  Hearing it in the context of Weber and Mendelsson, who didn't write opera but wrote incidental music of genius,  we can hear how the drama in this symphony affects interpretation.

Gardiner's period approach reflects German Romantic music theatre before the revolution that was Richard Wagner.  Here the colours glowed, evoking the magic of the worlds of Weber, Mendelssohn and Singspiel tradition.  Not all magic is malevolent,. This last of Schumann's symphonies was inspired by an interlude of great happiness, when Robert and Clara took a holiday along the Rhine, both of them acutely aware of its symbolism and place in  Schumann's songs, such as "Berg’ und Burgen schaun herunter" from Liederkreis op 24, and the verse, from Heine :

Gardiner and the LSO articulated the sparkling figures in the opening movement so they flowed , like a river, sunny but with darker undercurrents hinted at in the strong chords in the second theme, and the quieter passages in its wake. This coloured the second movement, suggesting the scherzo qualities behind the surface. There are echoes of folk dance, evoking the vigour of peasant life, but Schumann doesn't tarry. Bassoons, horns and trumpets called forth, the movement ending on an elusive note.  The movement marked "Nicht schnell" was gracefully poised: as an intermezzo it connects the happiness of the Lebhaft movement with what is to come. The solemn pace of the fourth movement marked "Feierlich" may describe a ceremony the Schumanns witnessed in Cologne Cathedral, but its musical antecednts can be traced to other sources, such as the song "Im Rhein, im heiligen Strome" from Dichterliebe.  The size of the cathedral, and the reverberations within it are suggested by the figures (trombones, trumpets, bassoons) which stretch out as if filling vast spaces. With Gardiner's clear textures the motif suggesting a cathedral organ was very distinct.  Whateverv the movement may or may not mean, the muffled horns and brass fanfares evoke a power that is very far from the insouciant quasi-folk tunes that have gone before.  Yet Schumann concludes not with gloom but with a reprise of the sunny Lebhaft, the emphatic chords even stronger than before, this time lit up by a glorious fanfare, the brass shining above the strings below. The very image of the Rhine surging past towering mountains.

On Sunday 10th February, Gardiner and the LSO will do their last concert in this Barbican Schumann series, with Schumann's Symphony no 1 and the Manfred Overture (tickets here)  To read about their first concert, with Schumann Symphony no 2 in C major op 61 (1847) and the Overture to Genoveva with Berlioz Les nuits d'été, please read HERE.
at February 08, 2019