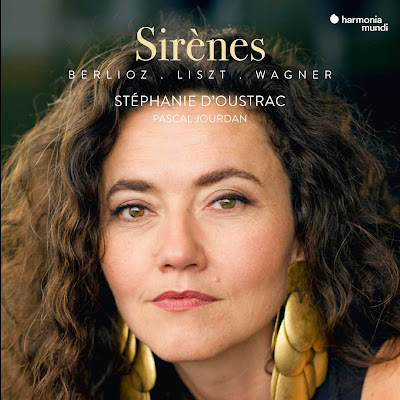 Stéphanie D'Oustrac Sirènes, with Pascal Jourdan, songs by Berlioz, Liszt and Wagner, from Harmonia Mundi. After D'Oustrac's striking success as Cassandre in Berlioz Les Troyens (Please read more here), this will reach audiences less familiar with her core repertoire in the baroque and grand opéra.  Berlioz's Les nuits d'été and La mort d’Ophélie,  Wagner's Wesendonck Lieder and the Lieder of Franz Liszt are very well known, but the finesse of D'Oustrac's timbre lends a lucid gloss which makes them feel fresh and pure.

D'Oustrac's Sirènes is also valuable because it demonstrates different approaches to the art of song for voice and piano. Berlioz's Les Nuits d'été op 7, to poems by Théophile Gautier, initially completed in 1841, was exactly contemporary with the works of Schumann's Liederjahre  Later, Berlioz would expand the accompaniment for orchestra, effectively creating a new genre, orchestral art song, which would be developed later in the century by composers like Mahler and Hugo Wolf.  Nonetheless, even in the original form for voice and piano, these songs are highly individual, quite distinct from the songs of Schumann and Mendelssohn.  "I only wish people to know that [these works] exist", wrote Berlioz, "that they are not shoddy music . . . and that one must be a consummate musician and singer and pianist to give a faithful rendering of these little compositions, that they have nothing to do with the form and style of Schubert’s songs"

These mélodies of Berlioz are characterized by elegance and restraint. In "Villanelle", for example, the repeating patterns in the piano part might evoke Schubert, but there's an effervescent gaiety in them that is matched by graceful flow of the vocal line.  In "Le spectre de la rose", the more languid pace allows the voice to curve sensuously.  Berlioz clearly understood the carnal undertones in Gautier's poetry.  The piano part is gentle, but persistent, like an embrace. When D'Oustrac's tone deepens with the phrase "Ô toi qui de ma mort fus cause", one can almost sense the  perfume rising from the petals of the doomed rose. Although Les Nuits d'été is not a song cycle in the strictest sense of the term, recurring themes of love, and death and perpetual change give it a coherence which is particularly clear when it is performed with the intimate focus that a single singer and pianist can achieve.  The three songs, "Sur les lagunes : Lamento", "Absence" and"Au cimetière: Clair de lune", form a unit, sombre with the stillness of the tomb, which is then broken by "L'île inconnue" where the ebullient high spirits of "Villanelle" return. Les Nuits d'été begins with promise of Spring and new  life, and ends with adventure. "La voile enfle son aile, La brise va souffler.", D'Oustrac breathing buoyancy into the word "souffler". Though Heine inspired Mendelssohn and Schumann with dreams of the East, Gautier and Berlioz are tapping into an even deeper vein in the French aesthetic : ideas of freedom, change and new frontiers in exotic settings.  D'Oustrac and Jourdan extend Les Nuits d'été by following it with Berlioz's La mort d’Ophélie, from Tristia op 18, a setting of a ballade by Ernest Legouvé, who, like Berlioz himself, adapted Shakespeare for French theatre.  Ophélie, who dies for love, floats upon a torrent, depicted in the rippling piano part.  "Mais cette étrange mélodie passa rapide comme un son". Though the voice imitates a lament, this is not so much a song of mourning but a transformation through music.  The stream carries "la pauvre insensée, Laissant à peine commencée Sa mélodieuse chanson."

This recording is titled Sirènes, tying Berlioz's songs together with Richard Wagner's Wesendonck Lieder, both inspired, in part, by women who awoke strong emotions.  Sirens, who attract but aren't necessarily positive, though they generated great art.  With full orchestration, the Wesendonck Lieder showcase Wagnerian flamboyance. But, as with Les Nuits d'été , voice and piano versions  concentrate focus on a more intimate scale.  Even more pertinently, this highlights Wagner's place in the context of the Lieder of his time, and in relation to Schumann and Franz Liszt.  "Der Engel" is gentle,  and  the dramatic declamation of "Stehe Still !" more human scale.  D'Oustrac and Jourdan are particularly impressive in "Im Treibhaus", the sensitivity of their expression reflecting the intense inwardness that makes Lieder as powerful a genre as opera.

One of the most iconic siren figures of 19th century Romanticism was the Loreley. This recording begins with one of the most beautiful Loreley songs of all,  Liszts's Die Loreley S273/2, a setting of Heine's poem.  D'Oustrac's silvery timbre illuminates the song, accentuating its mystery.  She and Jourdan include another other Liszt setting of Heine, Im Rhein im schönen Strome, S272/3 and four settings of Goethe, of which Über allen Gipfeln ist Ruh S306/2 works particularly well with D'Oustrac's lucid style.