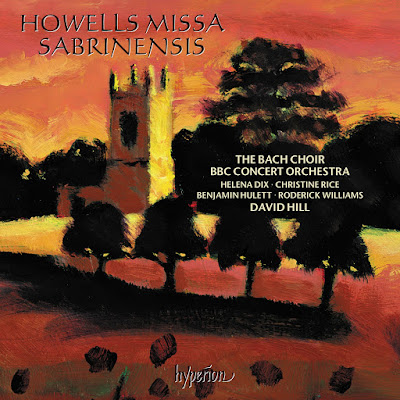 At last, Herbert Howell's Missa Sabrinensis (1954) with David Hill conducting the Bach Choir, with whom David Willcocks performed the piece at the Royal Festival Hall in 1982. Willcocks commissioned the Mass for the Three Choirs Festival in Worcester in 1954, when Howells himself conducted the premiere. "Such was the level of intricate detail of Howell's counterpoint", noted Wilcocks, "that he was like a medieval stonemason carving high in a cathedral, knowing that his details would be perceptible only to the composer."  This new edition by Paul Spicer and David Hill, recorded irded by Hyperion using modern sound technology, reveals those details in their full intricate glory.

In Missa Sabrinensis, Howells adapts the Mass format to celebrate the river Severn, (in Latin, "Sabrina") and by extension its role in British history, and specifically its connections to British music. The 1954 premiere of Howells’s Missa Sabrinensis was paired with Vaughan Williams' Hodie, dedicated to Howells in his maturity.  By extension, the Mass  also celebrates the Gloucestershire landscape and its personal significance for Howells and Ivor Gurney, with whom he would go walking in the surrounding countryside.

Nonetheless, Howells breaks away significantly from conventional choral tradition in the sophistication of this Mass. As Jonathan Clinch writes in his notes "the Mass can be heard as more of a choral symphony, in which he gradually builds up significant blocks of sound, using the soloists, chorus and orchestra as contrapuntal forces. This is the main reason that the work was considered so difficult, as the orchestra was not there to support the chorus in the traditional manner, but rather to build more and more lines of polyphony.  The river metaphor is appropriate as Howells writes such long lines, which are subsumed into the overall mass of sound, surging forward through the first four movements and gradually dispersing in the final two; thus, despite the complexity and number of Howells’ parts, it is the overall symphonic arch that dominates."

The surging lines of the Kyrie with their complex melismata suggest vast horizons, such as the flow of a mighty river, or plainchant under the vaulting of a cathedral.  Soprano (Helena Dix) and tenor (Benjamin Hulett) function as an extension of the chorus. Their lines undulate, creating dense textural patterns, as if the search for faith were greater than the need for simple resolution, the final movements ending in diminuendo. Though Clinch identifies elements of Debussy and Ravel in this Kyrie, as well as Parry and Vaughan Williams, the synthesis is distinctively Howells’, closer to the spirit of Howells' English Mass, from the following year, 1955 (Please read more here )  In the Gloria, Clinch notes "ecstatic fanfares and constant dotted rhythms... creating a texture teeming with life, reinforced with bright high brass and percussion.". Again, the image of a great river, fertile and fertilizing,  while the underlying flow remains strong and unhurried.

Of the Credo, Howells wrote "this movement is begun in full cry, chorally and orchestrally, using a theme that will return at all cardinal moments.....At ‘in Spiritum Sanctum’ the theme of ‘Qui sedes’ and that of ‘Kyrie’ and ‘Agnus Dei’ are quoted. Thereafter the movement’s climax is reached through the style of opposed diatonic chords (‘et apostolicam Ecclesiam’), recapitulation (‘Confiteor’) and coda (‘Et vitam venturi saeculi’).". This Credo is a statement of hope and faith : all four soloists (Dix, Hulett, Christine Rice and Roderick Williams) join in, their voices reflected by the their counterparts in the choir.  For a moment the soloists sing with relatively little accompaniment, but on "et resurrexit tertia die secundum scripturas" all voices combine. Here, too, the orchestra (the BBC Concert Orchestra) comes to the fore, in glorious finale.

Howell's Sanctus begins with reference to Stravinsky's Symphony of Psalms,  which he regularly cited in his teaching at the Royal College of Music. The Symphony of Psalms is a hybrid, its texts drawn from Psalms 38, 39 and 150, blending the form of ritual religious music to orchestral style, at once ancient and modern, with the unmistakable austerity that would mark Stravinsky's later style. Huge blocks of sound, hewn as if from a rockface, yet moving forward with slow but monumental pace. There are connections between the two works. Howells creates a wall of sound,  building up dense, complex textures culminating in an outburst where the organ leads voices and orchestra. textures building up in density : "Osanna in excelsis" before yet another return to pregnant stillness, from which the Benedictus emerges.  The voice parts here are spare, resembling plainchant, enhancing the purity of the text, creating luminous contrast with what has gone before.

In the Agnus Dei, Howells reiterates themes from the Kyrie, emphasizing the cyclic symphonic structure of this Mass.  It is as if Howells were looking back while at the same venturing forward to new musical territory.  It reminds us of the tragedy that generated the Hymnus Paradisi, as if the offering up of the life of Michael Howells, so many years previously, had made the tenderness and resolution of this conclusion possible.  Howell's Missa Sabrinesis is a masterpiece, its true genius revealed in this exceptionally sensitive performance, recorded so lucidly that it defies its reputation for being difficult to perform.   This is essential listening for anyone into Howells and the true greatness of his work.

This recording pairs the Mass with Michael, written one morning whern Howells was having breakfast with his son. It's a joyous hymn tune employing youthful voices, highlighting the simple joys of life. The brass fanfares might evoke adventure, hope, and promises that tragically, would never come to pass.
at May 13, 2020

Glad you like it! Gurney and Howells aren’t ‘buried together in Twigworth’ - Howells is in Westminster Abbey.

It's you who deserve the thanks ! Error duly corrected. I was thinking so much of Michael