Ca' the yowes to the knowes - folk song and art song 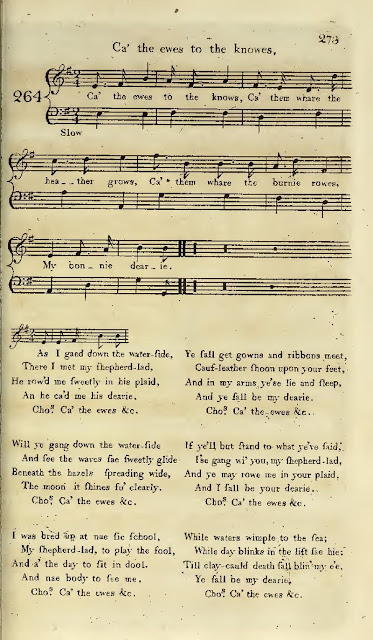 New from Stone Records, Part 3 in their Roger Quilter Complete Songs series,  Roger Quilter's Ca' the yowes with Mark Stone and Stephen Barlow.  Quilter's Ca' the yowes comes from a a set named the Arnold Book of Old Songs, written for Arnold Vivian, Quilter's nephew, named after Quilter's brother Arnold, killed at Gallipolli.  Tragically, Vivian, too, was killed, in 1942, shot while attempting to escape from a prisoner of war camp. Quilter's Ca' the Yowes is very different to earlier arrangements, such as the version by Maurice Jacobsen made famous by Kathleen Ferrier, and the version by Benjamin Britten, much more frequently perfomed.  Jacobsens's version is gentle, like a lullaby, while Britten's version is more austere and plaintive, as befits a song which might once have been a lament from harsh times, long ago.  Both Britten and Quilter evoke a sense of abandoned desolation, recognizing the context from which the song might have arisen. Quilter's version is even closer to lament, particularly in favouring a lower, masculine register : the piano part is understated, suggesting, perhaps, the bleak internal landscape. In the final verse, the voice swells in intensity : "I can die but canna part, My bonnie dearie".  The  song is attrributed to Isobel "Tibbie" Pagan (1741-1821)  a colourful character, who owned an alehouse where she wrote poems and sang songs for her customers.  Click HERE for a well researched piece on the evidence of Pagan's life.  It seems she was an outsider, not only because of her looks, but may have been born illegitimate. Nonetheless, the song's origins may well go much further back, to undocumented traditional ballad.  (Pagan wasn't a farmer, nor was she illiterate).  Robert Burns heard it sung by a clergyman, who may or not have got it direct.  Burns himself revised his version of the poem three times. The version in the photo at right was published in 1790.

Ca' the Yowes demonstrates one of the fundamentals of vernacular song, that the music and text are  flexible, depending on the performer or composer.  Furthermore, these songs were being collected, and notated, too, long before the "folk revival" at the turn of the 20th century.  It's just a question of luck which performer happens to be collected, and that doesn't stop good composers and performers from making the most of the material at hand.