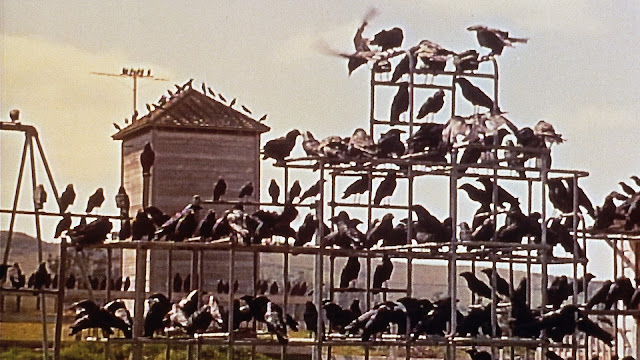 In times of COVID pandemic, it's scarier than ever to watch Alfred Hirtchcock's The Birds, released in 1963.  Since I used to live round there, the dichotomy between art and reality had an even greater impact than an ordinary movie.  We knew that gas station when it was still  hand pumped, and the pier when it was still worked by fishermen, bringing in their catch. We used to drive past the schoolhouse, up a narrow lane.  One year the rose covered cottage where Annie the schoolteacher supposedly lived, but didn't join the crowds of tourists who went to view. Some scenes filmed on location, others copied in studio, but absolutely convincing. So scenes such as Melanie sitting "driving" a car against a badly cut filmed background of birds  might have been deliberatly unsettling - what is real, what is not ?

Hitchcocks The Birds works on many levels. Melanie Daniels (Tippi Hendren) is a rich bitch whose life is aimless so she does silly stunts like dancing naked in a public fountain and smashing. Daddy's a millionaire newspaper owner., so she gets away with anything, including getting reporters to track people down by their car licence plates - illegal then, as now.  While she's in a bird shop, a lovebbird escapes and goes berserk flying round the room.  What does it know ? Mitch Brenner (Rod Taylor) gently catches it and puts it back in its cage. Melanie becomes obssessed with Mitch and figures out a way to stalk him, even if it means sailing a boat across Bodega Bay to his home.  She brings him a pair of lovebirds, but lies non stop about her motives. Yet he lets her into his life.  Annie, (Susanne Pleshette) knows something's wrong with Melanie but she loves Mitch so much she's willing to play second fiddle rather than lose him.. Mitch's mother Lydia (Jessica Tandy) also has psychiatric issues so perhaps Mitch, Annie and his family are in cages of their own.  Melanie blames hrer problrems on her mother who walked out on her but doesn't wonder why her mother needed to do that in the first place.  Though the mayhem doesn't start til the birds go mad, the people here are already waiting to explode. 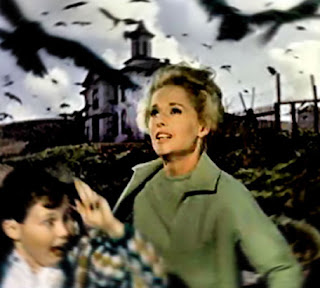 Birds attack the children playing at Cathy (Mitch's sisters)'s birthday party, burst in the balloons. Seagulls come down the chimney and attack Mitch's family as they sit after dinner - rural bliss destroyed by something alien.  On the farm next door,  the chickens haven't been feeding, something's amiss.  Next moring, the farmer is found dead, his eyes picked out by birds. This is no silly prank. Chickens, who don't fly, avenged by crows. Then the famous schoolyard scene. While the kids sing in the classroom, Melanie waits outside, smoking a  cigarette.  A crow appears on the climbing frame, then another, and another...... Calmly tells the kids to move as quietly as possible  but the birds descend on them as they walk to the cars.  Melanie goes to the local gas station to phone her Dad. No phones at home, then !  And goods delivered by horse and cart.  The crows attack. Gasoline spills and ignites into a fireball. Melanie hides in a phone booth ( a glass cage). She and Mitch go fetch Cathy, who is at Annie's but Annie is dead. She died, pushing Cathy into the house before she was pecked to death on the doorstep.

The family hides out at their farm, which is boarded up in vain defence. But the birds get in, through the attic and attack Melanie. They don't really know what's happening outside Bodega Bay except that most locals have evacuated, they're alone and attacks have occured in Santa Rosa (nearest major hospital) so they start to drive to San Fransisco.  But as they're fleeing, the car is besieged. What happens ? Hitchcock's The Birds is a masterpiece. Nature can turn the tables without notice.  The trappings of civilisation collapse quickly when people think they know better than Nature