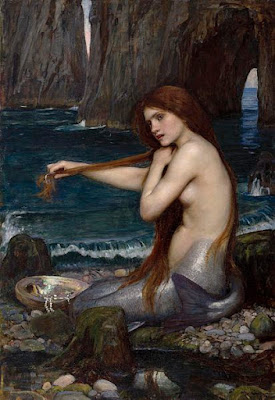 Alexander Zemlinsky Die Seejungfrau with Vladimir Jurowski conducting the Royal Concertgebouw Amsterdam Orchestra in 2013 on the RCOA streaming site (link here).  Jurowski has conducted Die Seejungfrau with numerous orchestras so many times that he's pretty much the main man when it comes to the piece these days.  Since the score was thought lost until 1984, there really isn't any "performance tradition", though many learned it from Ricardo Chailly's 1994 recording. Jurowski's enthusiasm for the piece has helped to make it now one of the most popular of all Zemlinsky's works. So it's worth listening to the commentaries before the concert starts.

Jurowski conducts the most recent edition, compiled  by Zemlinsky specialist Anthony Beaumont, who has  studied Zemlinsky and his contemporaries (including Ama Mahler) and is probably the main researcher in this field.  Approaching Zemlinsky without access to Beaumont's experience is like trying to swim without water - an apt a metaphor for Die Seejungfrau who loses her identity when she's on alien ground.  This edition reinstates the Sea Witch sequence, which is pretty much fundamental to interpretation, connecting the tale of the mermaid to much more sinister, supernatural forces. This "Little Mermaid" isn't cutesy Disney but a sister of the Sirens,  who lured sailors to their deaths. This Mermaid is all the more cursed because she isn't a serial killer who kills on autopilot, but a person with deep emotions, who is forced to destroy the man she truly loves. One can imagine what psychological levels that might imply.

Knowing the background to any work gives the music extra poignancy. The disturbing, mysterious first movement of Die Seejungfrau came from a sketch for a symphony about death, but the piece as we know it  was written in February 1902, weeks before Alma deserted Zemlinsky to marry Gustav Mahler.  In the second movement,  which portrays a ball at the underwater palace of the sea creatures, some notes are reversed, inextricably linking the mermaid's tragedy to the joys of others who accept what they are meant to be. The mermaid  sees the image of a prince, who is so alien to her world that she  longs to be like him, instead of herself.  A storm arises, sinking the prince's ship – no missing this. As the mermaid walks on shore with painful human feet, she treads in pain, and the music deliberately drags. The mermaid is forced to have her tongue cut out and never sings again. For a musician, giving up creative expression is particularly cruel.  Zemlinsky identified with the mutilated mermaid : like her, he could never be what he was not. Fortunately, he turned his anguish into art, sublimating trauma  through works like Der Traumgörge and Der Zwerg until the transcendance of the Lyric Symphony in which renewal takes over from the past. (please see my piece on Zemlinsky's Lyric Symphony HERE)

This is what I wrote about Jurowski's Zemlinsky Die Seejungfrau with the London Philharmonic Orchestra in 2016, some years after the RCOA concert:

Jurowski captured the menacing depths in the introduction. Small, sparkling figures served to highlight the sinister gloom. The violin melody suggests the upward movement of the mermaid swimming upward: the LPO playing with energetic sense of purpose. Jurowskiu didn't bask too long in the sunshine. the urgent, almost violent theme which might represent the prince as huntsman churned up dissonance. Already we know this fairy tale will end in death. Jurowski and the orchestra delineated the churning undercurrents. Frequent turbulent contrasts between lyricism and violence. Jurowski didn't steer clear of the innate ugliness lurking within. The two-minute Sea Witch passage unearthed and edited by Anthony Beaumont makes a difference, intensifying the violence and the ultimate tragedy. Jurowski's background as opera conductor helps greatly, too, for he emphasizes the inherent drama in the orchestration. Jurowski's Die Seejungfrau is an opera where the orchestra sings for the characters. It's vivid in a cinematic way without being maudlin or sentimental. Descending diminuendos prepare us for the final confrontation. Jurowski lets sounds surge forth, yet holds it back, creating extreme tension. The LPO play with such richness that you could feel the intensity of her loss. Had she had legs instead of a fishtail, she might have been a princess, but in her sacrifice, she finds Isolde-like transfiguration.
at May 28, 2020