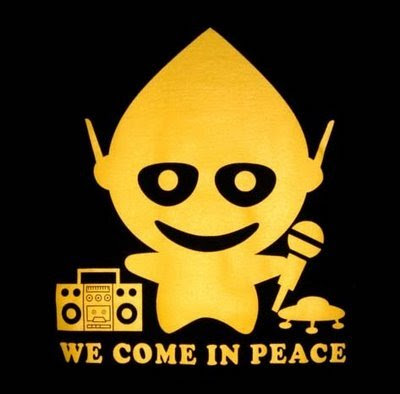 Sacred dogma to people who don't like 20th century music is that modern music "cannot" be warm, emotional or witty. The more a cliché gets repeated, the less willing people are to challenge it. "The Rest is Noise" has become a fundamentalist's holy text. Ditch that, read a real book like Paul Griffiths. Or even listen without mufflers.

Stockhausen funny, warm and irreverent? He had lots of crackpot ideas which he couldn't see past but in many ways K H was at heart still a small boy serving at Mass, filled with wonder at the mysteries of the universe. Sometimes he's downright whimsical. Perhaps that's why Oliver Knussen loves him so much.

Stockhausen muses on stars and light forms, and visitors from other planets. Michael is recognizably a relative of Michael the Archangel who appears in the old Testament and beats up the demons of death and darkness. Licht and Klang could probably occupy analysts for years the way Dylan and Tolkien kept people busy in the 60's. Stockhausen, in his sincerity, is much more genuine and creative that the crass commercial takes we usually get.

Glanz (Brilliance) from KLANG (10th hour) is a reincarnation of Harmonien, KLANG's 5th hour. It's a "magic seven" ensemble. Four low, murmuring outer voices - trombone, tuba, oboe and trumpet- and a central core of three - viola, clarinet and bassoon. Within the core, in the middle of the performance space, stands an object which glows luminously with unnatural brightness. This "shining sculpture" is part of the composition even though it makes no sound,. It seems like a pivot emitting centrifugal power. The other players (and I mean "other") circulate around it and move in orbits of their own. It's a kind of hypnotic, ritual procession. At one point the clarinet seems to break away, veering off in an ellipse, but the other instruments call him back.

The four outer core players emerge from different parts of the performance space. Suddenly appearing out of the darkness, three of them appear like angels, or heavenly messengers, their white robes illuminated by a dazzling spotlight. Perhaps there's infrared or something in this light because it casts an unearthly glow - no soap powder gets whites this white! Then the central trio bursts into song, disjointed snatches and phrases which gradually emerge as Gloria in excelcis Deo, et in terra pax in hominibus bonae voluntatis. Is this Stockhausen's Nativity -lay, with a green glowing pyramid for a crib? Stockhausen, Son of Sirius, meets The Son of Man.

Then the tuba emerges, from behind the stage, playing slowly and fitfully. "Like a bear emerging from hibernation", wrote Stockhausen. Gradually the "bear" wakes and the tuba plays a cheerful sort of melody, as if the bear was dancing in sunshine. In Star Trek, Spock and his Vulcan friends may be clever but they don't do humour. Humans are flawed but wit keeps them going even when reason falls short. Not all humour has to be obvious belly laughs. Some of the most radical is pretty subtle, which is why it's subversive - not everyone can pick up on it. Trolls, for example, go berserk if you make a pun! So KHS is giving us the gift of levity.
Please see the other posts on this site about Stockhausen - more on this site on new music than most anywhere else.
at December 23, 2009