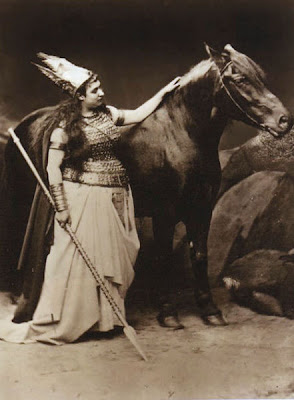 Hoiotoho!  Wagner goes global, Die Walküre from Bayreuth available online, internationally thanks to Siemens AG. "The whole world is a festival theater" goes the publicity, and it's true.

It really is a grand gesture because the whole opera world can come together, to enjoy the finer parts of Wagner's vision.  Kinder, macht Neues! in every sense. The petty cliques of closed cult Bayreuth are breaking down.  In this increasingly cynical, selfish world, such gestures are generous. Of course there's something in it for Siemens, since they're demonstrating the potential of telecommunications technology. But their faith in Bildung deserves respect. Bildung simply means that human beings can strive for improvement, and for ideals.

Pity, then that they had to screen Tankred Dorst's brain-free Die Walküre. It's been around since 2006, so Siemens should have been warned. Or maybe someone in marketing realized that what sells these days isn't what is good, but what appeals to the lowest common denominator.  Big money was thrown into this production, but it's so pointless it would disgrace a student venture.

Wagner without ideas? Wagner without emotional engagement? Wagner railed at Meyerbeer (unfairly) for producing brain-dead pap.  Now Meyerbeer has the last laugh. This set's so generic it could have been lifted from a cheap video game. Except they haven't made video games that dull since 1981.  The designs didn't have a chance, though, as the direction was so cardboard that they might as well have put the singers on castors and rolled them on and off. "It's Freudian", Dorst tells an interviewer. He noticed? Pity he didn't tell anyone. This isn't a "modern" production by any means. Breastplates, funny hats. Basically, a tacky remake of some notional antique Ring, learned from photographs, not from the music.

This is what happens when there isn't any direction at all, not even an attempt at coming to terms with what's in the opera.Whatever Wagner may be, he's not superficial or shallow. This is a production by and for those who don't actually like Wagner.

Fortunately, this is a very strong cast, all experienced enough to know what Wagner's about. So, park and bark, without the bark. Johan Botha's a finely nuanced Siegmund, good enough that he'd probably convince as Siegfried.  Kwangchul Youn's Hunding is complex and dark, much more than stock villain. Edith Haller's gorgeously vivacious when her Sieglinde breaks out of Hunding's spell. Mihoko Fujimura sings well, but really shouldn't have been costumed as fake-Japanese. It's racist because she's a good performer whatever her nationality. Albert Dohmen looks ridiculously young next to Linda Watson's magnificent Brünnhilde. She saves the show because she gets on with her vision of the role, in the vacuum of this vacuous production. Maybe she was bored witless too, but being a true Valkyrie, she got on with the job.

Christian Thielemann conducted spiritedly. Often, a conductor gets praise when the rest of a production's bad, but in this case the praise is deserved.  So what a disappointment - good singing (if no acting), good orchestra, absolutely wonderful sound reproduction and intelligent filming and lighting. And definitely major respect due to Siemens AG, the TV crew backstage, the simultaneous translator, and the whole team that made this broadcast possible.  They are extremely professional. But Gesammstkunstwerk with the drama missing, that's not Wagner. Hopefully, next year Siemens will have the courage of artistic conviction and let the lowest common denominator rise up towards it. Maybe that's just the kick Katharina needs. If Siemens can get this Wagner to raise her standards, they'd be doing  Richard Wagner a huge favour indeed.
at August 22, 2010

Thank you for making known this truly well inspired possibility. I will have a try with the performance on demand as you can do that until September 5. Often now the staging seems to be conceived as an independent art from the music, that is meant to be understood "on its own terms". This staging looks like an event (the music) on which a journalist (musician) would write with an opinion while the photograph (Stage director) would decide to picture a lady (or a minister) he likes in the audience. Ironically I was hesitating today about booking for a once-in-my-life performance of Tannhauser for that kind of fears, while being tempted by a strong cast at the same time. Thank you very much for your recent posts on Mahler too. I dont know to what extent but Wagner seems important to understand Mahler's "démarche" music and scope. And it has also different levels of understanding and soundness. With my good thoughts

I couldn't have said it better.

I had a thrilling Friday and Saturday at the Laptop with Abbado/Mahler on Friday from Lucerne and Wagner from Bayreuth on Saturday.