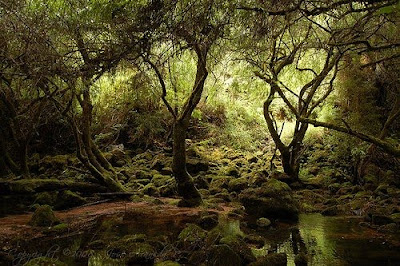 Hans Abrahamsen's Wald (2008-9) is a joint commission between the BBC and the Asko/Schönberg Ensemble, The title hadn't really registered on me before listening, but my first impressions were of dense textures, multiple layers of strange, half-heard sounds, which keep moving forward, into "clearings" of greater lightness. Like exploring a mysterious woodland, where sights are half-glimpsed in shadows, and invisible creatures teem in the undergrowth. Percussion on the right, distanced from the rest of orchestra, clustered around piano and marimba. Layers on layers. A primeval past is evoked by natural horns, and the creatures of the forest by scuttling, scattering techniques on strings and low winds. Read the programme notes by Julian Anderson for more.

"Music is pictures of music", says Abrahamsen. "That is a strong underlying element in my world of ideas when I compose - as is the fictional aspect that one moves around in an imaginary space of music. What one hears is pictures - basically, music is already there." Wald is a beautiful work, which goes far beyond literal representation. It works when you enter the mood, experiencing it on its own terms.

I've written about Abrahamsen's Schnee, which is also very organic, the layers building up like falling snow, muffling and changing what is heard. A good friend thinks it's the most boring piece ever, "like watching snow fall". So the atmosphere doesn't work for everyone, but for me it's like Buddhist prayer, very purifying. It's out on CD now.

Luke Bedford's another exceptionally interesting composer/ LOTS about him on this site, follow the labels and search! Or voit tout en aventure bowled me over when I first heard it in 2006, for it is a truly remarkable piece, one of the most voice-friendly works in the repertoire. Claire Booth looks about 8 months pregnant now, and I worried about the strain on her, but Bedford's lines move like speech, rising and falling  naturally. Crescendi build up gently, so Booth can breathe effortlessly  into the words. Or voit tout en aventure is already something of a perennial, and Booth's been singing it with BCMG from its premiere. This, too, is on CD, an essential, I think. Bedford's written an opera, scheduled for 2011.

George Benjamin was due to conduct this Prom with his Three Inventions for Chamber Orchestra. Although he wasn't there, this was ironically a fitting tribute to Benjamin's bereavement, for one of these inventions was written in memoriam of Olivier Messaien, Benjamin's creative father figure. It quickly segues into the longer, elegaic Lento titled Alexander Goehr, who is most certainly still alive, but the overall thrust feels dignified, respect warmed by love.

I was very impressed by Ilan Volkov, called in at short notice. When he conducted the BBC Scottish Symphony Orchestra, it often felt like something was being held back.  I wonder now that it was the orchestra itself, who may be happier with one of their own. Volkov is young, eclectic and an outsider. He deserves an orchestra that appreciates him. He's still principal guest conductor at BBCSSO, but hopefully, he'll find a niche in London or in mainland Europe.
at August 08, 2010