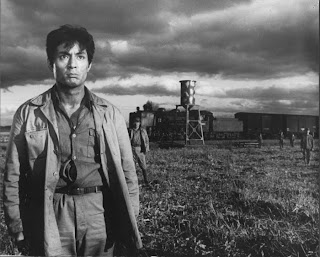 Clocks stopped at Hiroshima at 0815 on Monday 6th August 1945. Immediately, the justifications began. But can mass murder ever be condond? Who decides who's "good" and who's "bad" ?  So I want to commemorate this day with Masaki Kobayashi, The Human Condition. It is a monumental epic, a trilogy that lasts nearly ten hours, without breaks. Like Wagner's Ring, it's extremely demanding emotionally, but the effort is worthwhile. These films will change you, if you  engage with them, and let them work on your soul.

Based on a six-volume novel by Junpei Gomikawa, The Human Condition is set in wartime Japan. Japan doesn't have mineral resources, so it occupied Manchuria in 1931. Effectively, the province was turned into a gigantic slave camp, Manchurian and Chinese workers drafted in to work under horrific conditions.

At head office in Japan, a young idealist called Kaji (Tatsuya Nakadai) thinks treating workers well increases production. So he's sent to Manchuria where he come up against reality. The dread secret police, the Kempetai, use the mines to dispose of political prisoners. Kaji gets set up by corrupt officials, but not before witnessing the defiance of some Chinese prisoners. As one is about to be beheaded, he shouts against tyranny. When the Kempetai try to kill Kaji, the Chinese prisoners march on the Japanese with nothing but moral force, and the  Kempetai back down.

For his pains, Kaji is sent to a danger unit in the Army, but proves his moral worth. He avoids killing but one day kills a Russian hand to hand. He feels guilt, even though he will be the sole survivor of his unit, which gets massacred. Kaji ends up in a Siberian POW camp much like the one he used to run. Again he's set up by venal bullies, but decides to escape, against all odds. Of course he ends up dead, but he's liberated.

Notice that the book was written very soon after the war and filmed by Kobayashi from 1959 when memories were still fresh and painful. Kobayashi was himself a soldier in Manchuria, and a leftist. There were a lot of Japanese socialists, although it was a criminal offence. Masao Ohki, who wrote the Hiroshima Symphony, was another one. The Japanese were certainly not all western movie caricatures.

The film is shocking because it deals with things like death camps and comfort women and the massacres that followed the Russian advance.  Yet what's really striking is the way people are portrayed with dignity, even to some extent the villains. Despite unrelenting degradation, Kaji learns what it is to be truly human. He doesn't betray his principles, and in the end he defies the system, just as the Chinese he watched being beheaded stood up to their oppressors.

These films mean a lot to me. In China, no-one wasn't affected by the Japanese invasion. Obviously, millions traumatized. Because I used to do so much about the war in China, I came across many remarkable stories, where people didn't react with hate. Even stories like Kaji's, men caught up in situations not of their choosing and having to take a stand.  In one incident in Hong Kong, 35 people were beheaded in one day, to intimidate the population. One man, an elderly Christian pastor, who'd studied at Cambridge, comforted each victim. He was the last to die, but after cutting 35 heads, the sword gets blunt, it's gruesome. Yet Reverend Wong continued praying to the end, forgiving his killers.  The Human Condition is a movie, but many stories like it in real life.
at August 06, 2010

He was close to death at the end of the war and arguably owed his life to the Hiroshima bomb. However, he always maintained it should never have been dropped.

I was listening to Penderecki's Threnody for the Victims of Hiroshima quite recently. I thought it might have shown it's age, but for me it seemed more effective than when I first heard it years ago.

Thank you Dominic. Many of my family were at Sendai, others killed in war crimes incl the one with Rev Wong. Our community was wiped out. And yet the abiding thing is that, in the long term, they didn't hate. My father used to say, if you carry hate, you remain a prisoner.