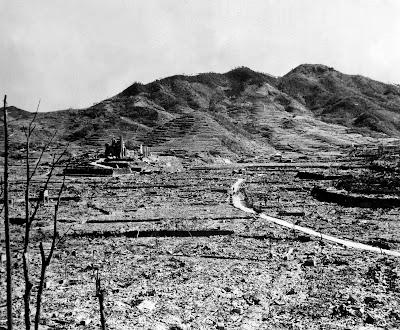 This picture looks like desert scrub. In fact it's Nagasaki, after the atomic bomb hit on 9th August 1945. In Hiroshima, a torii in a shrine was partly spared the devastation all round it. In Nagasaki, the Catholic Cathedral was the only structure left standing. (that's it on the hillside) Most of its parishioners didn't survive.

"Why Nagasaki?" some asked, for this was a most westernized, liberal city. Nagasaki was where St Francis Xavier preached to the Japanese, converting hundreds of thousands. Nagasaki began trading with the Portuguese in 1543.   Huge vessels sailed from Lisbon carrying silver and weapons in exchange for silk and porcelain. "The Black Ships" inspired Nanban art. From Nagasaki, many Japanese travelled west, to Macau, to Goa and to Europe.

Japanese Christians built Macau's St Paul's Cathedral, Japanese baroque, mixing Asian and western imagery. Read about it here (photos are mine)  Macanese genes are probably more Japanese than anything else. What an irony! When the Japanese invaded South China,  thousands of Macanese, who'd emigrated to Hong Kong, Shanghai and Canton, were forced back to Macau as refugees. So the circle turns.

Japanese Catholics went underground after their religion was banned early in the 17th century, and re-emerged nearly 300 years later, their faith intact. Because Nagasaki was a Christian centre, many Japanese Christians joined the Navy. There is a story that, weeks after the fall of Hong Kong, the Macanese community were worshipping in Rosary Church. In marched a Japanese naval contingent. Everyone panicked. But it turned out that these Japanese were Catholic, and had just come to hear Mass like everyone else. So much for stereotypes and divisions between people.

Please take time to explore this blog as there is a lot on Nagasaki. Macau, Japanese and Chinese culture, non violence, war, Hiroshima,  multi cultural things like mixed race communities (beyond Puccini!) .Things on this site you will not find elsewhere. Like THIS, a study of a Buddhist response to the madness of violence, in the film Burmese Harp.