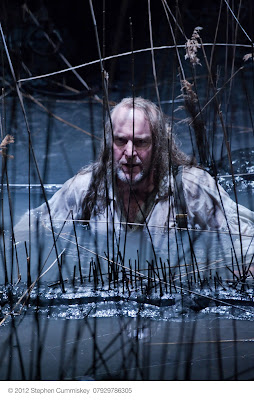 When the ENO does really innovative work, it does so with style. Wolfgang Rihm's Jakob Lenz may have taken 34 years to reach London fully staged, but this ENO production made such a strong impression that it might be years before it will be forgotten. The Hampstead Theatre is a more claustrophobic performance space than the Young Vic or the Coliseum, which suits this opera well. Jakob Lenz was the Romantic poet who became insane. The stage is shrouded, as if in a mist, surrounded by realistic looking reeds. A reference to Wozzeck working in the reed beds, hallucinating mushrooms. The play on which Rihm's Jakob Lenz is based was written by Georg Büchner who wrote Woyzeck, the source of Alban Berg's opera. 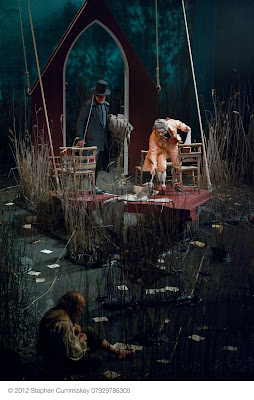 Crazy, tangled images of reeds and water permeate this production  Jakob Lenz is trapped in his madness : most of the action takes place on a narrow island on a stage within the stage. Lenz (Andrew Shore) keeps falling off the edge into real water, sometimes completely submerged. Pastor Johan Oberlin (Jonathan Best) doesn't seem to notice,  but Lenz's friend Christoph Kaufmann (Richard Roberts) glances warily round the edges, careful not to lose his footing. It feels dangerous.

Lenz's psychosis connects to these waters.  He drags a young girl into the pond and drowns her. Or so he thinks. Reason blurs into unreality, just as land blurs into water in these reed beds. Lenz thinks the girl, whatever she may be, is raised from the dead because he prays. "Lenz", incidentally, means "spring"  which would not have been lost on poet, playwright or composer.  The girl (Lillie Forrester) isn't a real girl, but may be Lenz's idealized projection of himself. "Logical, Logical!" he repeats later, as if mantras will restore order. In that sense, he's not really so different to the pastor and to the church around which this village clings. An outline of the church looms over the proceedings, and its mirror image forms the platform on which Lenz moves. 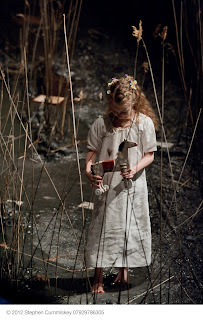 Hyper-realistic staging for an opera where reality is so distorted that the narrative disintegrates. Lenz is obssessed by Friederike Brion (Suzy Cooper) who was interested in Goethe, not in Lenz, though in Lenz's mind she is a kind of muse. She's seen in powdered wig and face, like a ghostly wraith. An apparition as much as a character, and not a woman, as such. This very busy setting was wise, for Wolfgang Rihm's music is too intense to be easy listening. British audiences aren't used to Rihm yet and need picture postcard images from Caspar David Friedrich to distance themselves from the extreme emotion in this music. 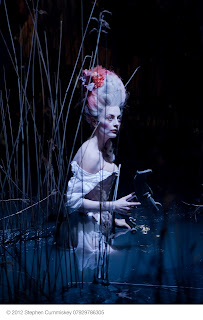 But what music it is! Intensely atmospheric, almost pictorial. Oboes, bass clarinets, bassoon and cellos, moaning ominously like wind in the reeds, echoing the otherworldy choruses. A harpsichord screams in shrill desperation. Hollow wooden tapping, muted percussion like frantic  heartbeats. Sudden cries from small trumpet. Atrinmgs tapped and plucked, sounds half heard from beyond the auditorium. (Conductor : Alex Ingram). Hearing Rihm's Jakob Lenz audio only can drive you crazy, but that's the point. Lenz is an artist. Oberlin isn't, though he's nice. Must artists be driven like Lenz is? Imagination is powerful because it hints at more than it tells. 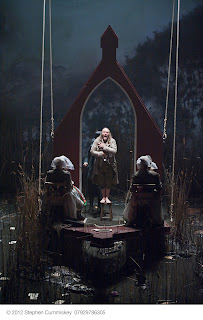 Performance of a lifetime from Andrew Shore as Jakob Lenz, with strong support from Jonathan Best, Richard Roberts and Suzy Cooper, plus good chorus and actors.  This isn't an opera or a production for those who think Rusalka should be a pretty fairy tale, but it's like a fairy tale in that it deals with situations that can't be easily explained. Georg Büchner's original play (1836) treats psychosis in a modern, non-judgemental way. Generations before, Jakob Lenz might have been burned as a male witch. Büchner tries instead to understand, and Rihm gets us inside Jakob Lenz's head and makes us feel what it might be like. Not comfortable, but most definitely important. Sam Brown is the director, Annemarie Woods the designer. For bringing Rihm's Jakob Lenz to London, the ENO deserves every accolade.

Please see my other posts on Wolfgang Rihm (and of course on Rusalka)  A more formal version of this, with full cast list, will appear soon in Opera Today.