Nikolaus Harnoncourt against the bland and safe 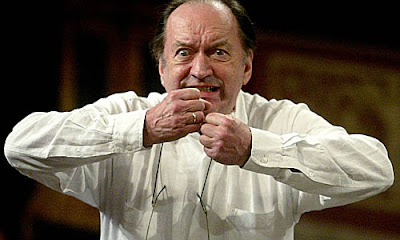 Nikolaus Harnoncourt doesn't do small talk, so the idea of him giving an interview to the normally vacuous BBC Radio 3 Music Matters seemed a contradiction. But a reader who listened wrote me, praising the interview highly. Listen because it's a real interview, where Harnoncourt is talking in depth and saying controversial things from the heart. He opens out because the interviewer, Suzy Klein, is intelligent.  When you have subjects like Harnoncourt, you don't do sloppy technique. Klein is good, and Harnoncourt responds. This is the sort of thing BBC Radio 3 should be doing if it's to maintain its credibilty.

Harnoncourt talks about his early life in a way that informs what he went on to do. He wanted to be a sculptor. Though he became a musician, that feeling for wood and organic shapes informed his musicianship. Later he would work with ancient instruments that had been locked away in monasteries since their suppression under Joseph II. Instruments have individual voices, and as a string player himself, Harnoncourt appreciated the sounds they "wanted to produce".  Harnoncourt's fascination with period instruments stems from this respect for individuality. He hates dogma. Historicism for its own sake is out, too. He prefers working with musicians who don't specialize. "They don't eat baroque food!" he says, meaning that no-one can truly replicate the baroque mindset. "I'm not a warden in a museum". The great works of history "have no time, the works of Leonardo da Vinci, of the Greek sculptors, of Mozart, they have no time,  they are always up to date and never old". What we learn from period practice is a more sensitive way of listening to instruments and to music.

Harnoncourt speaks about orchestral traditions. In the past, Viennese orchestras were dominated by Czech players. "It was said that only Czechs could play horns properly", he says, "and string players were Hungarian, who knew the gypsy style". In Harnoncourt's youth, American money and American orchestras swept in. "I hated the sound of American orchestras, " he says, where every note is polished and correct. Of George Szell, with whom he worked, he says "He should be happy that I didn't kill him...  there was not one minute of music making", Harnoncourt mimics Otto Klemperer's disdain""Szell? Look at him".  "But he was a kind of god and all the American orchestras tried to imitate him". "Americans are so afraid of making cracks on tones that they shorten their instruments so they will not crack. But that's not music, it is security. For me, security and beauty are not compatible, at all. When you seek beauty you have to go to the rim of catastrophe". If one of his musicians "cracks" because he risks everything to get beauty and fails, "then I thank him for the failure. If you seek security you should find another profession".

So safe, bland and international doesn't appeal to Harnoncourt. Concentus Musicus Wien began as a group of musicians playing for their own pleasure. They had to copy manuscripts by hand, and track down authentic instrumenst to experiment with, some of which were bought with private funds. This "band of renegades " as Suzy Klein describes them, were exploring new approaches to repertoire, informed by what a composer might have heard. " I tried to understand what a composer meant". True artists, like Casals, Busch and even Alfred Deller weren't afraid to make stylistic mistakes if they expressed the true spirit of the music. Erich Kleiber, "the real Kleiber" as Harnoncourt calls him, was so good that if "I had more real musicians like that I would not have left the orchestra". Harnoncourt dismisses the idea of conductors as superheroes ("Karajan had to fight politically to keep his 'von'")  and doesn't like the term Maestro, which he personally reserves for his hairdresser. For him, the composer is god.

Listen to the interview HERE til Sunday. It puts the controversy of HIP versus non-HIP into perspective.  Please also see another voice of common sense "Is Sir Colin more HIP than he lets on?"
at April 17, 2012