Karol Szymanowski was always "dangerous". Populist music history consigns composers into neat little boxes which don't reflect reality. Schoenberg, for example, is still imagined as the Big Bad Wolf. Szymanowski's  exotic perfumes atre  misunderstood. Szymanowski's neither Schoenberg nor Hollywood, but completely unique. No way was the Polish Communist Party likely to honour a former aristocrat, and a modernist at that. So Szymanowski was assigned, in the popular mind, as some lush byway no-one ventured near. When Pierre Boulez revealed that he'd studied Szymanowski since the 1940's, there were some who were shocked. But Boulez learned his Szymanowski from the scores, not from populist clichés. Listen to his outstanding recording of Szymanowski's Third Symphony and Violin Concerto No 1  (my review here). It's transformational, even for those who've known Simon Rattle's pioneering recordings from the 1980's. (photo of Tetzlaff by Alexandra Vosding).

When the Barbican announced that Boulez would conduct Szymanowski in two concerts, many bought tickets the moment they went on sale last year. Boulez has since had eye problems and had to pull out, but Christian Tetzlaff, with whom he made that remarkable recording, was able to play the Violin Concerto with the LSO. Peter Eötvös, who has known Boulez for decades, conducted. Obviously the LSO and Eötvös are not the same as the Weiner Philharmonker and Boulez, but Tetzlaff was able to turn the situation to good advantage. The recording was for posterity. The Barbican concert allowed Tetzlaff to play with a greater degree of freedom. Absolutely in command, he played even more vigorously, taking risks one might not dare otherwise.  At times, he stressed the angular, edgy aspects of the piece so it felt even more uncompromisingly modern.

As Jim Samson said in his book, The Music of Karol Szymanowski (1981), in the Violin Concert no 1 "the formal scheme is totally unique and represents an ingenious solution to the problem of building extended structures without resorting to sonata form". We can hear the seeds of Boulez's own music being sown in the almost chaotic proliferation of sub groups and themes within the orchestra,  contrasted with extended violin cantilenas, soaring high above the orchestra, so refined and so rarified that they seem to propel the music into new stratospheres. I thought of Dérive 2 and even Dérive 3 and the way Boulez keeps generating multiple and simultaneous layers of inventiveness. Mandelbrot patterns, in music, mathematically precise, yet full of the vigour of natural, organic growth. 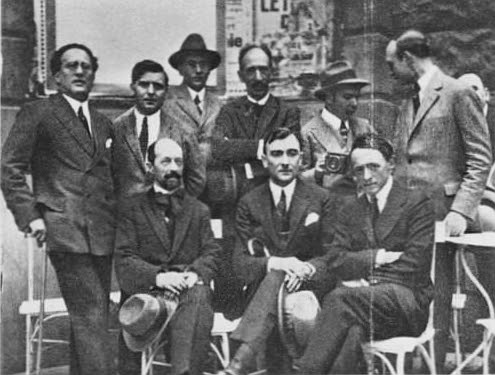 Szymanowski used to be described as a kind of Bartók manqué because he only came to Polish folk music late in life, disregarding the fact that he'd long been an accomplished composer attuned to Stravinsky and Debussy decades before. So, with a wicked grin, Tetzlaff launched into Bartók's Violin Sonata no 1/3 the "Melodia", exaggerating the dynamics it so it sounded extraordinarily like Szymanowski. Extreme pianissimo, almost inaudible, but clearly felt, the bow hardly seeming to move. A tiny tap on the wood before sailing off into the kind of wild, high tessitura Szymanowski loved. Tetzlaff's got a sense of humour, turning the Bartók/Szymanowski cliché upside down. He probably wouldn't dare do this in a regular concert, but as an encore, it was a brilliant act of daring.  I was transfixed by his hands and technical control. My friend noticed how the LSO violinists were spellbound.  Virtuosi we can hear quite often. Tetzlaff in sardonic mode is something special. (The photo shows Szymanowski at the centre, with Fitelberg, Szigeti, Roussel, Reiner and Arnold Bax).

Debussy's Nocturnes, with which the programme started, seemed untypically imprecise, almost slack. Possibly  Eötvös knew that most of the audience had come for Szymanowski. Certainly he marshalled the orchestra for the Violin Concerto extremely well, so Tetzlaff's "Boulezian" approach flowed through seamlessly. Eötvös has been conductiung Boulez's music for so long that he has the idiom almost by instinct. Boulez has also made Scriabin's Le Poème de l'extase distinctly his own, but the piece is so well known that it hardly needs his imprint. Here, Eötvös gloried in the lush colours of the music, connecting Scriabin with Szymanowski's eclectic exoticism and oddly enough to the same fire that burns in Boulez. Populat cliché portrays Boulez as cold, but passion burns just as intensely when it's white-hot and pure. If only people would listen to Boulez, instead of rabbiting assumptions!
Eötvös will be conducting Szymanowski's Symphony no 3 at the Barbican on May 8th. Get the Boulez recording. Lots more on Szymanowski (and Boulez) on this site - use labels or search box)