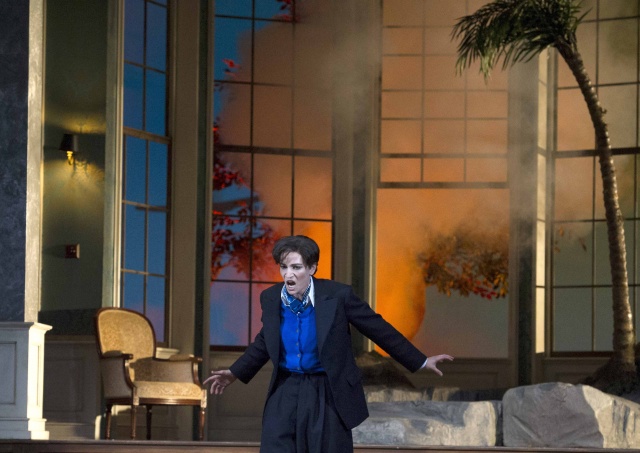 Utterly mad but absolutely right - Richard Strauss's Ariadne auf Naxos started the Glyndebourne 2013 season with an explosion. Full review HERE. Naiads and Dryads as nurses. Ariadne and Zerbinetta patients in a mental hospital. But then, Strauss could hardly have made his intentions more clear. Vorspiel and Opera are quite distinct. But which is more real? Ariadne auf Naxos is not "about" Greek myth so much as a satire on art and the way art is made. The music is modern : snatches of waltz, moments of woozy fantasy: Strauss is referencing his own times.e
The Composer sings in the Vorspeil  because he/she thinks he/she can create a work of art. But the Opera takes on a manic new life of its own. The Composer (Kate Lindsey) watches in  mute horror  as the parts he thought he dictated express things he/she could hardly envisage. Strauss is sending up the very idea of art. He's also sending up social pretensions. Ariadne and Bacchus hardly come from "normal" families. Is it any surprise that Ariadne's fantasies seem quite insane? Freud would have had something to say about her sexual hangups, and Zerbinetta's lack thereof.  Strauss also satirizes other composers. No one is sacred. Rarely has the connection between Tristan und Isolde and the "opera" within Strauss's opera been made so explicit. Listen to the music and its parody of Wagner. Strauss's Liebestod unfolds as the hospital curtains billow outwards like the sails of a ship, lit by a red glow which suggests fire or sunset. Or, more potently, the burning of Valhalla.  Katharina Thoma's Ariadne auf Naxos is quite mad, but deliciously, deliriously werktreue, respecting Strauss and Hoffmannstahl's savage wit.

Instant opinion is almost always shallow. This production deserves much deeper thought. So I won't review it til tomorrow to do it justice. (please come back).  In the meantime, here is Robert Hugill's interview with Kate Lindsey in Opera Today. That's her in the photo, as The Composer (credit Alastair Muir) HERE IS A LINK TO MY FULL REVIEW WITH PHOTOS
at May 19, 2013