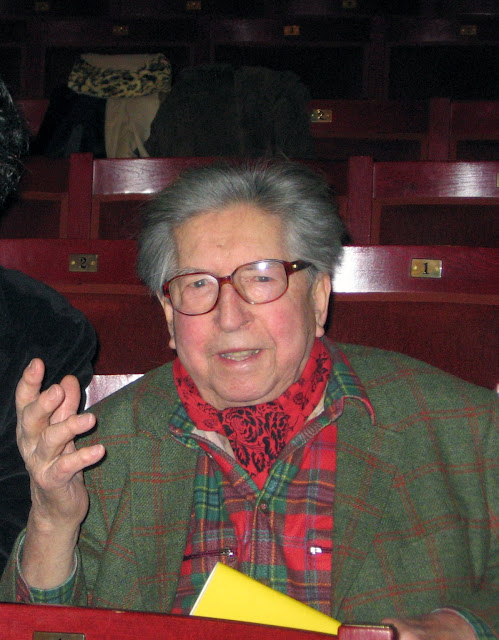 Henri Dutilleux (1916-2013)  died this morning, aged 97. This photo dates from 2008, when the composer came to London to receive the Gold Medal from The Royal Philharmonic Society. He attended a concert at the Wigmore Hall, given in his honour. Later that evening, who should I meet walking past the Wigmore Hall at midnight? 92-year-old Henri Dutilleux, on his way to his hotel after the post-concert party.

The Wigmore Hall concert was rather special because it was conducted by Jan-Pascal Tortelier, whose father, Paul Tortelier, had studied with Dutilleux at the Paris Conservatoire. How often does a conductor do the music of a composer who has known him since he was in nappies? Dutilleux recounted how he and Paul Tortelier as students were too poor to go out much, but scraped together enough so they could hear Stravinsky conduct Les Noces. So Tortelier fils prefaced his concert with Stravinsky's Concerto in D for string orchestra (1946)  written around the time Dutilleux began to make his own name.

There were many other cryptic references in Tortelier's erudite programme, played by the Nash Ensemble. Dutilleux’s Dyptique- Les Citations is an unusual combination for harpsichord, oboe, percussion and double bass. Britten had also used percussion and harpsichord together, and there’s also a quote from Peter Grimes since the piece was initially written to honour Peter Pears. In typical Dutilleux mode, the composer added the double bass part in 1991 with a quote from  a piece for organ by Jehan Alain, another of Dutilleux's circle, who was killed in battle in 1940.

Extremely high violins introduced Ainsi la nuit, infusing the static first section with gleaming brightness. Again, this is distinctive Dutilleux, with elegant, delicate patterns evolving and changing until the piece reaches its conclusion in another static section where sound seems to float. Indeed, this section is actually called “suspended time”. This performance seemed to choreograph itself, so much were the musicians in accord. The long arches seemed like stretch, the ostinato like en pointe. I was struck by the connection to Les noces.

Tortelier also conducted Mystère d’un Instant so beautifully that Dutilleuex, greatly moved, said that was the finest he had ever heard. This version was a more recent revision of the 1989 original, reducing the number of strings to 18 from 24. There’s a feeling of space and light about this piece. Tones seem to shimmer, wavering between extremes of register, and textures seem to evaporate before reforming. What’s also interesting is Dutilleux’s composing rationale. Instead of using a formal strategy, in each of the ten sections he seeks the “mystery of an instant”, captured spontaneously as the musical idea emerges. Each section is an individual “snapshot” as Dutilleux calls it, like a Hockney collage perhaps, but animated and fluid. There’s a part where four cellos interact, another where high, keening string lines evolve into a tumble of quick, spiralling notes on cimbalom. A wayward drum rhythm unfolds to a jerky, pizzicato sequence on strings, itself superseded by a section where percussion and cimbalom lead. Then the strings soared higher and higher and in came the tam tam beaten at measured intervals, exactly as it would be in an East Asian temple. Dutilleux's reference is explicit, though what it signifies in the wider scheme of things I can’t guess. But that’s why this music is interesting. It may be neat and precise but it alludes to things beyond itself.

At one time some of Dutilleux's admirers resented Messiaen's much higher profile. That's petty. Dutilleux and Messaien are very different indeed. But perhaps they have a common heir in George Benjamin.
at May 22, 2013

"Tones seem to shimmer, wavering between extremes of register, and textures seem to evaporate before reforming. What’s also interesting is Dutilleux’s composing rationale. Instead of using a formal strategy, in each of the ten sections he seeks the “mystery of an instant”, captured spontaneously as the musical idea emerges. Each section is an individual “snapshot” as Dutilleux calls it, like a Hockney collage perhaps, but animated and fluid"


I find nothing more tedious or annoying than composers who talk about what's musically important to them, how they write pieces, their relation to the culture they came from, [and] why they ended up writing music the way they do.

Nothing, and I do mean nothing, more surely telegraphs in advance that a piece of music is not worth one's time listening to than its composer going on endlessly (or so it seems) about matters technical and cultural involved in the music's composition, and what influenced or motivated his (her) writing of it.

All that matters — the only thing that matters — is the music itself. If the music doesn't itself, by itself, say what needs to be said about it, it's ipso facto crap, and no amount of verbiage by its composer will serve to make it anything other.