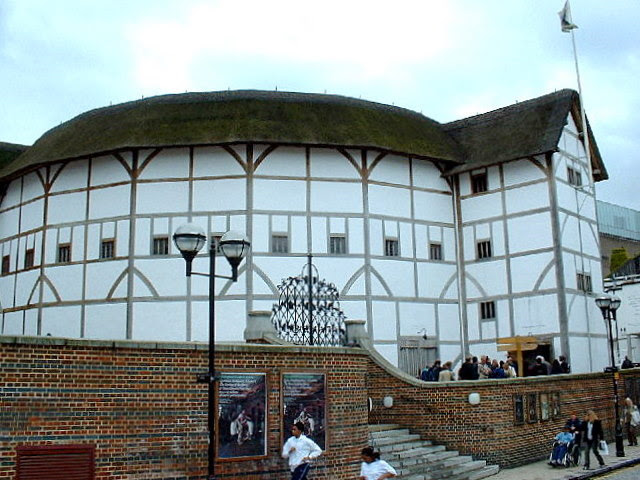 Shakespeare's Globe Theatre isn't the original Elzabethan Globe theatre but a 1997 recreation,  geared to the international market for Shakespeare experiences. It's Stratford-upon-Avon South, and even more "authentic" in some ways in that it's near where Shakespeare actually worked. In January 2014,  the Sam Wanamaker Playhouse opens to the public, extending the Globe's potential. Sam Wanamaker was the visionary behind the new Globe, so it's good that he's being commemorated with a new building that will expand the Globe's potential.

For a long time, it's been apparent that the Royal Opera House needs a new medium sized performance space  for productions that are smaller scale than merit the main house but too big for the Linbury Studio Theatre. Perhaps the Sam Wanamaker Playhouse might fit the bill? Certainly it would be an interesting place to do baroque and other works loosely connected to the 17th and 18th centuries, but I don't think it's a long term total alliance.  Outsourcing is not a bad idea. The ENO has been using the Young Vic for years, and the Barbican is expanding across the road and to Milton Court. It makes business sense and doesn't involve spending millions. Only the South Bank seems fixated on  keeping things in one place whatever the cost or the logic. Read my article : Band Aid or Surgery - rethinking the South Bank)

So the Globe Theatre. Sam Wanamaker Playhouse and the Royal Opera House are planning a joint venture for March 2014. Francesco Cavalli’s L’Ormindo which  was first staged in Venice in 1644 at the Teatro San Cassiano. "The intimate nature of the work performed by nine singers and eight musicians in the intimacy of the theatre will provide a rare experience of Baroque opera, and a level of authenticity that promises to be richly revealing as well as rewarding." Perhaps it might work in the Linbury, but that's not the point. It's being done in a performance space that fits the aesthetic, and suggests new possibilities.Photos of the new theatre's interior show a modern foyer with a classically-inspired but elegant  "Jacobean" stage.

"Kasper Holten, Director of The Royal Opera, directs a production that draws on the theatrical conventions in London at the time, with music under the direction of Christian Curnyn, one of the most sought after Baroque specialists of today. And as the opera will be performed in English, this is a rare opportunity to discover not only the immediacy of a stage world of jealous lovers, elopement and the intervention of Fortune and Destiny but also the unique qualities of Baroque opera itself."

Excellent cast, created under the auspices  of the Early Opera Company, familiar to London baroque audiences. It certainly seems up market, and will help put the Sam Wanamaker Playhouse on the cultural map.

The new Sam Wanamaker Playhouse certainly doesn't exist "just" for opera. Even before L'Ormindo, the SWP will present "Mozart in London" a series related to Mozart's year in London. Trevor Pinnock curates a series of performances and readings which will feature no less than Kristian Bezuidenhout, Carolyn Sampson, Alina Ibragimova and Chiaroscuro. In April 2014, I Fagiolini led by Robert Hollingworth will be doing "The Boat from Venice to Padua", Monteverdi Madrigals and duets and Barca di Venezia per Padova.(1605) a short musical comedy by monk and musical prankster Adriano Banchieri. It will be staged by Peter Wilson. This is typical I Fagilioni adventure!