Maître à danser: William Christie and Les Arts Florissants at the Barbican, London, presented a defining moment in Rameau performance practice, choreographed with a team of dancers. Maître à danser, not master of the dance but a master to be danced to: there's a difference. Rameau's music takes its very pulse from dance. Hearing it choreographed connects the movement in the music to the exuberant physical expressiveness that is dance. Furthermore, the very structure of Rameau's music is influenced by the intricate patterns of dance. Rameau was a music theorist as well as a composer: his nephew was Didérot, the encyclopédiste, so this precise orderliness is fundamental to the idiom. Think about baroque gardens, where the abundance of nature is channelled into formal parterres, though woodlands flourish beyond, and birds fly freely.This tension between nature and artifice livens the spirit : gods mix with mortals, improbable plots seem perfectly plausible.

In these miniatures, one hears The Full Rameau. "You don't have to wade through a prologue, five acts and a postlude, as Christie has quipped. With dancers, the music becomes even more vivid. Sophie Daneman directed. She's a very good singer, specializing in the baroque and in Lieder. She first worked with Christie on Hippolyte et Aricie some 20 years ago.  On this evidence, she's a very good director, too.

Christie and Les Arts Florissants presented two miniatures, Daphnis et Églé  (1753) and La naissance d'Osiris. (1754). both were written as private entertainments for Louis XV and his court at Fontainebleau, after days spent out in the forests hunting for game. The context is relevant. these pieces also commemorate the birth of two royal princes.  The Barbican stage was lit beautifully,suggesting candlelight in a darkend room, creating the right hushed tone of reverence.  The King wanted to be amused. The show had to flatter his image of power. Both pieces present Happy Peasants, acting out simple, innocent lives, thanks to the benevolence of their King. When the second infant prince grew up, he was crowned Louis XVI and built Le petit Trianon, to act out pastoral idylls. 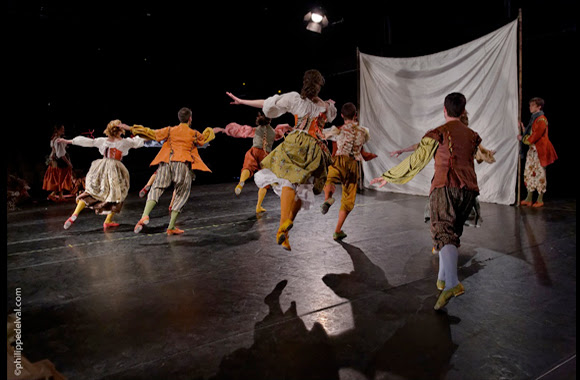 There's so little drama in Daphnis et Églé that its basically a masque for dancing,  Daphnis (Reinoud Van Mechelen) and Églé (Élodie Fonnard), shepherd and shepherdess, are friends who gradually fall in love over a sequence of 16 tableaux.  Daphnis flirts with a stranger, singing a lovely air. Églé drags him away. Dancers supply interest in the absence of plot. Each of these vignettes represent a different type of dance. Françoise Denieau choreographed. Fans of early dance will enthuse about the finer details.  I enjoyed the diversity and intricate formations, charmed by  the natural precision of the dancers.  It felt like hearing the score come alive. Van Mechelen and Fonnard are familiar names on the French baroque circuit. Fonnard's particularly pert and dramatic  and Van Mechelen has good stage presence. The first performance of this piece in 1753 flopped, apparently because the singers were duds. Fonnard and Van Mechelen most certainly are not.

Daphnis et Églé works well when its slender charms aren't overwhelmed by excess opulence.  Daneman's staging reflects this innocence, A simple cloth is held up on sticks to suggest  peasant theatre.  Alain Blanchot's costumes (organic dyed fabric?) show the shepherds and shepherdesses in what would have been normal 18th century costume for their class, ie "modern" for the time. Daneman has worked with Christie since their first Hippolyte et Aricie together some 20 years ago.
La naissance d'Osiris is altogether more substantial.  This time the French shepherds and shepherdesses congregate around an Egyptian temple (not literally depicted), worshipping Jupiter, much in the way paintings of this period showed European landscapes populated with Europeans and semi-naked figures from Classical Antiquity. There;s a particularly beautiful part for musette (baroque bagpipes). The player gets to walk around the stage, among the dancers, just as at a peasant celebration. The idyll is shattered with a violent thunderstorm, the full force of Les Arts Florissants unleashed in splendid fury. Great lighting effects (Christoph Naillet). From up in the gods in the Barbican balcony, Pierre Bessière's Jupiter fulminates.  He will save the people by giving them his hero son, danced by a lithe young male dancer. Although the monarchy didn't know what was to come later, we can appreciate the poignancy in  these pieces because we do.

Since La naissance d'Osiris was written to mark the birth of Louis XV's second son (the future Louis XVI)  the allusion is audacious. The king of the Gods rules with divine authority, like an absolute monarch. The people know their place.  The piece is political  power game, Fonnard sang Cupid, with simple wings stuck to her back - sweetly naive, but firmed by Fonnard's feisty  singing. Sean Clayton sang A Shepherd and Arnaud Richard sang the High Priest. Eventually Jupiter takes his leave, and the Three Graces dance a lively trio.

Although Rameau's music had to be written to please a royal patron, at heart its gentle good humour and humanity triumph. We in the modern audience were able to experience Rameau presented with great depth and sensitivity.  Plenty of  Rameau on this site - please click on label "Rameau" below
at November 19, 2014