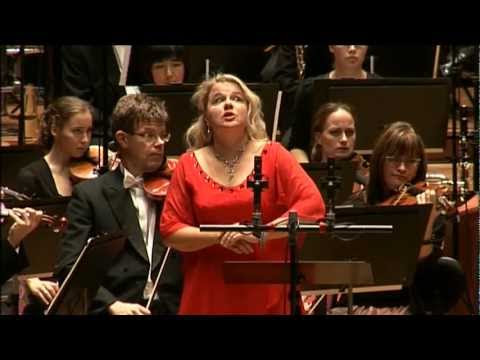 Finnish Independence Day last week was commemorated in a concert by the Finnish Radio Symphony Orchestra, conducted by Hannu Lintu, with Anu Komsi as soloist in Magnus Lindberg's Accused, which premiered in London in 2015. The broadcast, now available on arte.tv, is an opportunity to reassess Lindberg's unusual work.  Accused (2014) is a series of scena based on factual documents, with extracts from an interrogation of people accused of political crimes. Mademoiselle Théroigne de Méricourt an aristocrat at the time of the French revolution, someone with a West German magazine in the Stasi controlled DDR,  and transcripts of the trial of Bradley (Chelsea) Manning  Factual documents (more or less) whose purpose is to prosecute. The voices of the accused are submerged.  By the very nature of these documents, personal human drama is subsumed in cold bureaucracy.  In Accused, we hear the process of justice or non-justice roll relentlessly. Happy endings and "stories" might be more entertaining, but there is a lot more to art than entertainment.

Magnus Lindberg (b 1958) has a formidable body of work, almost entirely orchestral, chamber or instrumental, so Accused, for large orchestra and soprano, is something of a departure. It doesn't follow vocal writing conventions, but works, for me, anyway, more like a concerto, where impersonal forces are pitted against a single voice, always in opposition.  Lindberg writes in blocks of sound - it's not every day we hear a phalanx of piccolos and flutes, small, individual voices acting en masse.  No chance of concertante. That's not the nature of political suppression.  The vocal line isn't easy, it twists and contorts, trying to resist. Anu Komsi isn't an ordinary soprano, even by the standards of contemporary music. Her defiant coloratura scales extremes. Her lines are written to torment and torture.  Yet, if you listen carefully, the outbursts are underpinned by underlying technical control. There are staccato passages so tightly focused, that, for a moment, the orchestra pulls back, then attempts staccato of its own without the commitment of the singer.  After another vocal crescendo, the orchestra makes a strategic retreat into dark rumbling basses.  The innate beauty of Komsi's voice asserts itself in longer lines, reminding us that the person accused is far more complex than her accusers.  These little glimpses of the personality within shine out, despite the swirling tutti around her.  Komsi's voice drops to quiet, low keening, then into fragile, broken fragments, before surging fiercely yet again. Sotto voce mumbles suddenly switch to clear, bright cries. Perhaps because we're familiar with Bradley/Chelsea Manning, we can pick up on the contradictions in the character of Komsi's portrayal. For example the soaring lines that turn back on themselves even if the words being sung suggest the dominance of the orchestra (the military).  Komsi's fermininity matters, as it matters to Manning.  This final scena ends with an oddly beautiful fragility, Komsi's voice  defying physical limitations. A celeste, strings and harp suggest that Manning might draw a measure of  solace, knowing  that the world is looking on. Accused isn't easy listening, but it's a warning that political suppression should never be normalized In his austere way, Lindberg makes the point that somethings cannot, and should not, be romanticized.  Were it not for those who fought for Finland's freedom, who knows what might have happened to the nation under Stalin.  Large parts of  Karelia were occupied by the Soviets, the native population ethnically cleansed. Think about that when you listen to En Saga and Finlandia, which framed this programme.  If the performances were rather routine, the pieces have been done so often that Lintu and his orchestra may have spent rehearsal time on Lindberg and on Helvi Leiviskä  Symphony no 3.  Leiviskä (1902-82)'s symphony dates from 1971. Pleasant enough, but not much to distinguish it from many other works apart from the composer's gender, which doesn't of course reflect in her music. Fair enough. But given that there are so many Finnish composers and musicians with much more to say, the piece was interesting rather than edifying.
at December 13, 2016