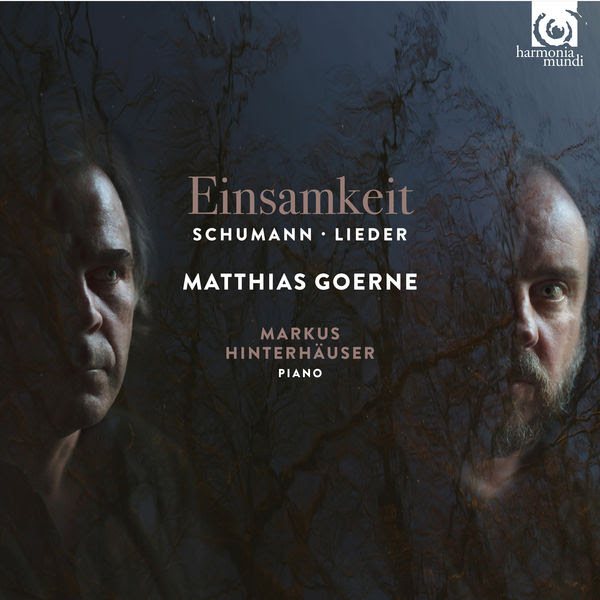 Matthias Goerne Schumann Lieder, with Markus Hinterhäuser, a new recording from Harmonia Mundi.  Singers, especially baritones, often come into their prime as they approach 50, and Goerne, who has been a star since his 20's is now formidably impressive.  The colours in his voice have matured, with even greater richness and depth than before.  If the breathiness that once made his style so immediate is gone, that's more than made up for by the authority with which he now sings. In this recording, the lustre of the voice combines with  Goerne's truly exceptional powers of interpretation: an ideal channel for a composer like Schumann, whose genius, surprisingly, is still underestimated.  Many of the songs in this collection come from the composer's later years, sometimes unappreciated because the style changes, heading toward new pathways.  Schumann was well informed, aware of new currents in cultural life. Certainly he knew Wagner, but Wagner and Schumann were probably heading in different directions.

Goerne has been interested in late Schumann for many years, and sang many of these songs in his concert at the Wigmore Hall in 2015 with Menahem Pressler, where the songs were presented in the context of late Schumann piano pieces.  Please read more about that here  because it is important to consider the songs in relation to the piano works so dear to Schumann's soul). This recording, thus, is a must for anyone genuinely interested in Schumann beyond the "greatest hits" for it shows how Schumann remained a creative force, despite encroaching illness, an illness that might possibly be better understood today, which might have extended his creative years.

Schumann's op 90, to poems by Nikolaus von Lenau, were written in August 1850.   Goerne and Hinterhäuser began with Mein Rose, the second song in the set, evoking the fragrance of love song which makes Dichterliebe an enduring masterpiece.  Goerne's voice, though formidably powerful, can also be remarkably tender.  The gentle lilt of Die Sennin suggests warm summer breezes wafting the herdgirl's songs down from alpine meadows to the valley. It's a song in which tenors excel, but Goerne captures its sunlit radiance.  Then Einsamkeit, where the mood darkens. Under the densely overgrown spruce trees, "Still hier der Geist der Liebe", deep, hopeless love. Thus we are prepared for Requiem, the seventh and last song in Schumann's op 90.  The Requiem sets a text by an anonymous poet, which is rather apt since the poem deals with the annihilation of personality that is death.  The piano part is soothing, the lines long and sedate, but Goerne's artistry brings out the undercurrent of tragedy that lies beneath the conventional piety of the text.

We remain in the pensive solitude of Der Einsledler op 83/3 (Eichendorff) , also from 1850, before looking back on the past with a few songs from Myrthen (Heine) op 24 from 1840, the glorious Liederjahre in which Schumann's genius for vocal music suddenly blossomed, inspired, perhaps by his marriage to Clara.  Die Lotousblume and Du bist wie eine blume are sensuous, Goerne's voice imparting tenderness as well as desire.  Provocatively, though, Goerne and Hinterhäuser interrupt the floral reverie with two Rückert songs, Der Himmel hat eine Träne geweint op 37/1 and Mein schöner Stern !"  op,101/4 from Minnespeil, a collection from 1849 for different combinations of voices, reminding us of Schumann's interests in larger vocal forms.  It feels as though a chill has descended upon the spring blooms. But Schumann's creative forces do not wither but change direction. The imagery in the songs on this disc switches towards wider panoramas. Nachtlied op 96/1, to the famous text by Goethe, is in Schumann's setting, much more haunted than Schubert's.

Goerne and Hinterhäuser then return to 1850, with the complete set of Sechs Gesänge op 89 to poems by a strange man who used the pen name of Wilfried von der Neun,  "Wilfred of The Nine", meaning the nine muses, no less. This was the glorified pseudonym, allegedly adopted in his early youth by Friedrich Wilhelm Traugott Schöpff (1826-1916) who made a living as a pastor in rural Saxony. The poems are pretty banal, far lower than the standards Schumann would have revered in his prime. However, bad poetry is no bar, per se, to music. As Eric Sams wrote "the inward and elated moods of the previous year mingle and  blur together in the new chromatic style in the absence of diatonic contrasts and tensions a new principle is needed. Schumann accordingly invents and applies the principle of thematic change....It is as if he had acquired a new cunning and his mind had lost an old one."  The songs aren't premier cru : Schumann with his exquisite taste in poetry must have had a bad day.  Nonetheless,  Goerne and Hinterhäuser give such a fine performance that definitely justifies the prominence given to therm on this disc.  Lesser musicians beware. Though not ideal, these songs are worth knowing because they demonstrate Schumann's willingness to explore new directions. Sams is the source to go for studying these songs, for he analyses them carefully, drawing connections in particular to Am leuchetenden Sommermorgen and Hör' ich ein Liedchen klingen in Dichterliebe.  Sams said "Schumann's memory is playing him tricks".

Moreover, this set was written close to the time Schumann wrote the superb Lenau set op 90 with which Goerne and Hinterhäuser began this recording.  This shows that Schumann's powers were not failing. Like most creative people he wasn't afraid to take risks.  It may be significant, though, that Lenau had some kind of mental breakdown in 1844, aged only 42, and spent the rest of his life incarcerated in an asylum.  This recording ends with Abendlied op 107/6 from Sechs Gesänge (1851–52) to a poem by Gottfried Kinkel.  The song is dignified, an exercise in balance and  refinement. Listen to how Goerne shapes the lines, flowing smoothly from very high notes to very low. The song demonstrates his range and technical ability, but even more impressively his grasp of emotional subtlety.  As night falls, the world sinks into darkness. But the stars appear "in Majestät". The poet hears "the footsteps of angels" and the advance of a golden, celestial chariot "in gleichen, festem gleise".  No wonder the song ends, not with gloom but firm resolve."Wirf ab, Herz, was dich kränket und was dir bange macht". Definitely not "alone" in Einsamkeit.  This song is so beautifully done, it's almost worth the price of the whole CD.
at May 09, 2017