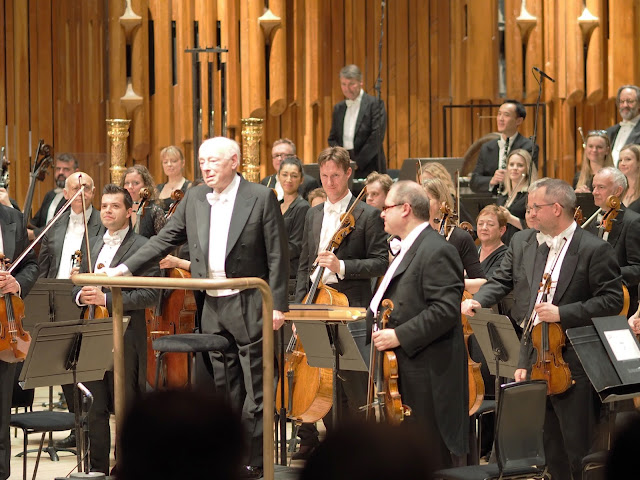 "Where words fail, music speaks"  These words were spoken by Gareth Davis, Chairman of the London Symphony Orchestra, before this performance of Mahler's Symphony no 9 with Bernard Haitink conducting the London Symphony Orchestra, at the Barbican Hall, London.  These words will be repeated over and over, for so they should be.  How can we respond, as decent people, to events like the bombing in Manchester? There are no quick-fix solutions.  But in uncivilized times, having faith in the power of higher ideals  may help, or at least offer the comfort of hope. We can, of course, listen to concerts with complete detachment, but emotional engagement adds to the experience. Our response to this performance could not but be coloured by events.

Because the Ninth was Mahler's last completed symphony, connections are often made with imminent death. Yet from first to last,  Mahler's symphonies chart transitions : from death to resurrection, from struggle to transcendence.  Das Lied von der Erde, Mahler's "true" ninth, quite explicitly connects death with renewal on a different plane of existence.  The "farewell" in Symphony no 9 is not annihilation but the journey from past to future.  Bernard Haitink has probably conducted more Mahler in his long career than most, yet he continues to develop.   Live perfomances are always "new", only recordings remain fixed, like specimens in a jar.   Eight years ago, he conducted this symphony with the same orchestra : the notes were the same, but the performances quite distinctive.

The gentle, palpitating motif at the beginning flowed into blazing, more expansive outbursts   A constant sense of shifting movement, bright horns and trumpets contrasting with the measured "footsteps" in the strings, echoed in the percussion.  The palpitating motif returned repeatedly, in different forms, ever moving forward.  Much is made of Bernstein's description of the motif as heartbeat, which is valid, and which is why it's so often referred to.  But abstract sounds can mean anything, depending on context.  From what we now know of Mahler's music and his personality, I think we can proceed towards a more open-ended interpretation, taking into account his interest in wider metaphysical ideas. In the next few days, we'll be seeing images of funerals - not only in Manchester, but, alas, all over the world. children die, and keep getting killed.  Whatever is at the root of this mindless attrition, thinking beyond self and more about others, might be part of the way forward.

Thus in this performance, the connotations were less militaristic march than purposeful traverse, as if the protagonist were trudging across mountains, toward a goal. Chills descended, nonetheless, but the melody leads on.  Hearing the violin and flute (Roman Simovic and Gareth Davis) in dialogue, I thought of Siegfried and the woodbird.

The second movement employs different dance forms. But why Ländler? Dance is physical movement, often in circles, with repetitions and small individual variation.  And why the marking  "Etwas täppisch und sehr derb"?  (rustic, simple, earthy). Perhaps the allusion is to nature and to fertility.  In Das Lied von der Erde, Nature does the work. In the Ninth Symphony, farmers toil.   Harvests mean plenty. In the violin perhaps we hear village musicians, sometimes local, sometimes journeymen.  But the rhythms are driven, with frenzy. all too soon winter comes and the ground lies fallow. Here the LSO, brilliant players, re-create the edgy, almost angular rhythms, which fade "into the mists", so to speak, of strings, harp and brass.  The palpitating figures in the first movement returned, in new variation, and the "march" pulled urgently forward, percussion crashing, brass ablaze.

The chill in the Rondo-Burleske was almost palpable, as if the strings were shivering.  Has frost cut down the harvest?   Dark bassoons murmured, the strings went quiet, yet again  from this desolation a melodic line (violin) arose, rising upward.  But the best was yet to come. The Finale was so refined that it seemed to come from another realm.   The high tessitura shimmered so beautifully that the music seemed bathed in ethereal light.  Upwards and upwards, the sounds levitated, counterbalanced by gentle diminuendos.  How does Haitink get players to hold lines with such poise and refinement?
He knows the LSO well, and they love him in return.  It must be some kind of alchemy.  When they performed this Finale in 2009, I could hardly hold my breath for fear of missing a moment.  This time round, even more refined transparency. The music doesn't "end" so much as becomes rarified, transmuted onto another plane of existence, beyond what the human ear can comprehend.  If Mahler's Ninth is a symphony of death, something happens along the way, which leads to total transfiguration.  And so, back to the phrase "Where words fail, music speaks". Absolutely necessary in these times of hate and madness.

I was there. I have seen live performances of Mahler's 1st, 2nd, 3rd and 8th performed live but this was the first time for 9th. I have heard it many times on CD's DVD's and You Tube but to hear it live, and with the brilliant Bernard Haitink made it a night to remember. I admit that I, like other I saws, braced themselves for the final movement. I knew it was going to be moving, it was. I wiped tears away especially when thinking about the bombing in Manchester. The audience were amazingly quiet during the final fading notes and the silence at the conclusion of the concert was significant, about 30 seconds I reckon. A night to remember as we applauded long and hard with a standing ovation as Bernard came back for his final bow.
Nick