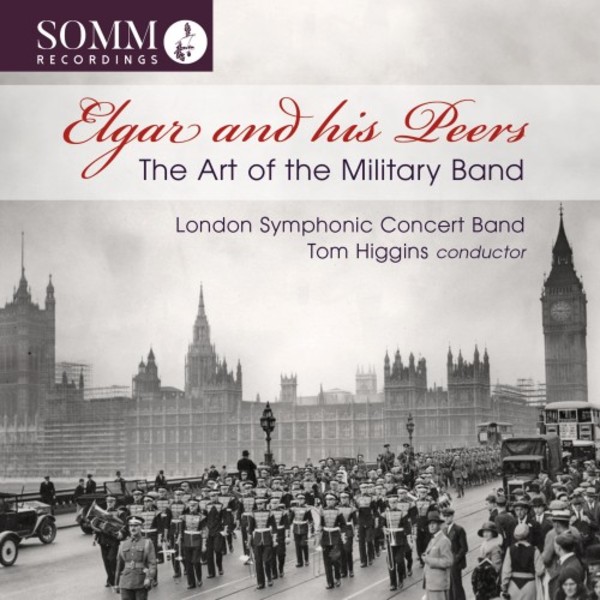 Elgar and his peers: The Art of the Military Band, new from SOMM.  Brass bands, both concert and military, are ideal for large-scale, open air ceremonies, where sound has to carry over a distance.  These requirements affect instrumentation. Brass  and military bands have huge followings, but listeners used to  mainstream orchestral performance can acquire a taste for the genre, through transcriptions like those on this recording.

Two transcriptions in this colletion, adapting Elgar's  Pomp and Circumstance op 89, nos 2 and 5, illustrate the art of writing for military band as opposed to concert orchestra.  Both are vigorous, perfectly enjoyable on their own terms.  Also included are two chorales from J S Bach's St Matthew Passion, which Elgar transcribed for brass band.  Inspired by hearing a  Bavarian brass band playing hymns from a church tower, Elgar arranged two chorales for the Three Choirs festival in 1911. These were played at the top of Worcester Cathedral before the main performance. Novelties, but also educational.

The more substantial With Proud Thanksgiving was commissioned by the League of Arts for National and Civic Ceremonies to dedicate the unveiling of the Cenotaph in London, on the anniversary of the Armistice, in the presence of King George V and numerous dignitaries, and the choir of Westminster Abbey.  The Worcester Herald, ever loyal to Elgar, reported "It is hoped that on the unveiling every choir in London - both Church and secular - will, take part in the ceremony".  Things didn't quite turn out that way.  This new SOMM recording is a world premiere.  Elgar's original was transcribed for military band by Frank Winterbottom, Professor of Instrumentation at the Royal School for Military Music, who had also made arrangements for Elgar's The Crown of India and Seviliana   Elgar later made his own version of the hybrid for full orchestra and chorus, which was first heard in the Royal Albert Hall on 7th May, 1921.

Thunderous drum rolls mark the introduction to With Proud Thanksgiving, "Solemn the drums thrill" runs the text, taken from Lawrence Binyon's For the Fallen, which Elgar had previously used as the third poem set in The Spirit of England.  Thus the same dignified marching pace, as in a funeral procession, the long vocal,lines projected forcefully, "as the stars shall be bright when we are dust".

In contrast,  the Queen Alexandra Memorial Ode, So Many True Princesses Who Have Gone, to a poem by John Masefield, the Poet Laureate, marking the unveiling, in 1932,  of the memorial sculpture to Queen Alexandra at Marlborough House, not indoors, but on the wall facing the street . "So many true princesses who have gone over the sea.......have given all things, and been ill repaid,"  Alexandra was an immigrant, a Danish princess with German origins. "Hatred has followed them and bitter days" Masefield continued :  But Alexandra  "won our hearts, and lives within them still".  Masefield describes London as a "day-long multitude, the lighted dark, the night-long wheels, the glaring  in  the sky". Remarkably modern imagery, and a tenderness not often associated with State occasions.  Elgar's setting is thus more private tribute than public piety. Though written for large choir and orchestra, it adapts well for smaller forces, as in this transcription by Tom Higgins for wind band, where the basic instrumental colours, such as reeds and flutes prevail in contrast to the brass.

Elgar 's Severn Suite, op 87, (1930) was commissioned as a test piece for a brass band competition,  the full score by Elgar himself.  The version heard here is a transcription for military band by Henry Geehl, who lowered the key from C major to B flat, to suit the requirements of military, as opposed to brass band.  Written in five movements played without a break, it's semi-symphonic and exits also in orchestral form.  Elgar didn't write the titles describing Worcester landmarks, which were added on publication.

This recording also includes works by Ralph Vaughan Williams: Sea Songs (1923) and Toccata Marziale (1924), the latter a very interesting band version of what might otherwise be a piece for organ,  There's also a March for Band by Thomas Beecham, as composer, rather than conductor and Three Humoresques by B Walton O'Donnell , the Madras-born son of a military musician in the Indian Army.  O'Donnell joined the army himself, and became a bandmaster before joining the BBC.  Tom Higgins, who helped create the very successful SOMM recording of Elgar's The Fringes of the Fleet (more here) conducts the London Symphonic Concert Band, a new specialist ensemble, and the Joyful Company of Singers.