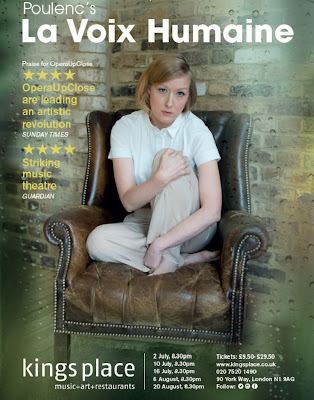 Francis Poulenc La voix humaine  with Sarah Minns at Kings Place, London, five performances from 2nd July to 20th August. It's a new production from Opera Up Close.  Booking details HERE.  Podcast HERE.
This will be sung in English, using Joseph Machlis's "official" translation of the libretto published by Ricordi in 1977. Pianist/Musical Director is Richard Black, Director is Robin Norton-Hale.


La voix humaine is a taut psycho drama demanding above average acting skills, and the stamina to hold intensity without respite for over an hour. Not many singers can pull it off well,  but Sarah Minns almost certainly can. She's an exceptionally good actress, as well as singer, and has made a speciality of operatic one-handers, including two UK premieres: Katarzyna Brochocka's The Young Wife (read more here) and even better still, Manfred Trojahn's Rilke song cycle, Insomnia, about Lou Andreas-Salomé, the mysterious woman who captivated Nietzsche, Freud, Rilke and Paul Rée.  Trojahn's piece is fairly well known in Germany, though not in Britain. It's a challenge because the action unfolds as a series of scena  based on extracts from letters rather than formal narrative.  Musically and emotionally sophisticated, and rewarding.  Minns didn't just steal the show: she "was" the show, creating Andreas-Salomé's mysterious, compelling personality to perfection.  On stage, she "became" the part so convincingly that it was a shock to see her later without costume and makeup, chatting happily like a normal person.  Art and reality!  Poulenc's La voix humaine is a tour de force, but with Minns, it should be worth experiencing.

Minns was also the star of  John Barber's Eleanor Vale at Wedmore Opera in Somerset, an opera that's strong enough on its own terms to be worth reviving. Read more about that HERE.

Email ThisBlogThis!Share to TwitterShare to FacebookShare to Pinterest
Labels: opera up close, Poulenc