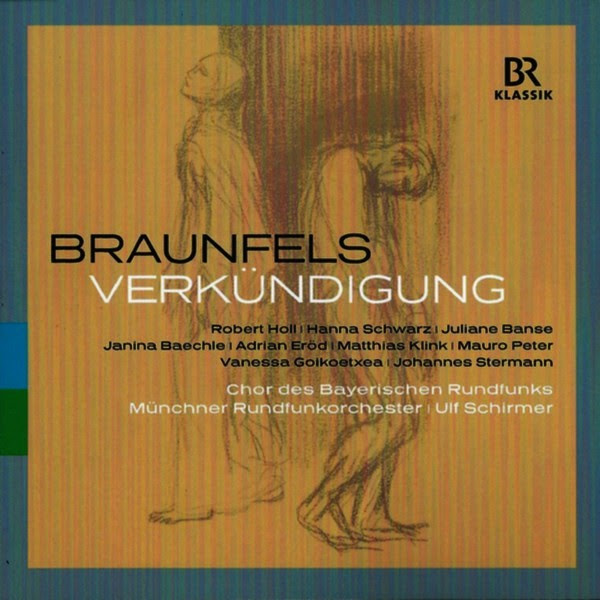 Christmas music ? Not ! Walter Braunfels  Verkündigung op 50 a medieval mystery play for modern times.  Angels, stars, snow, happy peasants and quaintly volkisch sounds. But no tinsel here, and no false sentiment. Braunfels was writing during the Third Reich.  Hitler loved kitsch medievalism, so Braunfels quietly turned it against him.  Braunfels's Verkündigung is subversion, the composer a resistance fighter in Gothic guise.  A miracle happens at Christmas but this is not religious music.  In this Nativity, the baby is stillborn, brought back from the dead by a mortal woman. God doesn't figure directly and the message isn't redemption.

The text is a loose adaptation of a play by Paul Claudel, an ultra-conservative Catholic and nationalist whose sympathies weren't far off from the Nazis.  Claudel was writing about a period before the emergence of Joan of Arc.  As an icon, Joan is as political as she is saintly. She's a saviour who gets martyred. Braunfels, who was radicalized by his experiences in the First World War, was passionately anti-war and despised dictators and charlatans.  Later, as Europe was again on the verge of war, Braunfels began to write Jeanne d'Arc, Szenen aus dem Leben der Heiligen Johanna . Please read more about that HERE.  So don't assume Braunfels didn't know what he was doing.   Verkündigung is an allegory which makes many potent points.
Peter von Ulm is an architect who raises money from believers to build cathedrals, symbols of power and unquestioning faith.  Hitler wanted to build whole cities to glorify his 1000 year Reich, seducing architects like Albert Speer.  Although Claudel's translator - not Braunfels himself -  shifted the action in the play from France to the early medieval German city of Speyer, the irony wasn't lost on the composer. Speyer = Speer, and Peter the rock on which grand Churches are built,  Peter von Ulm has a secret: he's a leper and he's infectious.  An angelus rings from Marienberg Tower.  Inspired by the idea of sacrifice, thinking that God will protect her, Violane kisses Peter to comfort him, and contracts his disease.  Violane's family and her fiancé, Jakobäus, think she's been unchaste and throw her out.

Years pass. It's Christmas Eve in Rothestein.  A cathedral is being built.  It's snowing and the peasants are celebrating the coming of the King, in every sense.  Braunfels’s writing is vivid.  Robust mock medieval instrumentation and jolly peasant dance, fuelled  by too much Pfälzerwein. "Weihnacht, tralla, Weihnacht tralla...... der Starmetz friert, brrrr, brrrr, brrrr!". Meanwhile, Violane is a hermit, having caught leprosy from Peter, and blind.  Her sister Mara's baby is dead.  Though Mara had betrayed Violane years before, now she wants Violaneto resurrect   the corpse.  Though Violane doesn't have supernatural powers, she hears the sounds of Christmas bells, though her sister can't.   Braunfels writes Violane’s part so the voice shimmers, as if the woman were being beatified by the orchestra around her. Fascinating music, pulsating with obssessive rhythms, the trumpets swathed by a celestial choir. Violane's voice soars upwards, in ecstasy, the choirs swirling round her.  Magnificent!

A miracle happens. But the dead child is reborn with blue eyes like Violane, not brown eyes like Mara !  So Mara throws Violane down a cliff, where she dies.  Peter von Ulm carries her body: Having been cured by Violane's kiss, he is now immune to catching the disease again. Violane is returned to her father's home, but that's not much help, since she's dead herself.  Nobody gets out of this well, except perhaps Peter von Ulm, who has learned by Violane's selfless example. Although parallels are often drawn between Verkündigung and Hindemith Mathis der Maler,  (artists and architects) there are also parallels with Parsifal . "Durch Mitglied wissen...."   Is Violane an artist, too, her art the art of self-transcending compassion ?

The recording to get is the one made for BR Klassik, with Ulf Schirmer conducting the Münchner Rundfunksorkester. Juliane Banse sings a rapturous Violane. I've been listening to her for years, and this is outstanding. Janina Baenchle sings Mara, Matthias Klink sings Peter von Ulm and Robert Holl sings Andreas Gradherz.  When this BR Klassik performance was mooted, the long-deleted recording from 1992. conducted by Russell Davies in Cologne, was re-issued. Though the singers on that are good, orchestrally it's less focused, the sound quality isn't conducive to concentrated listening. Schirmer and his forces bring out so much depth that their recording is the one to go for.

Please read my many other posts on Walter Braunfels and composers of this period.
at December 22, 2017