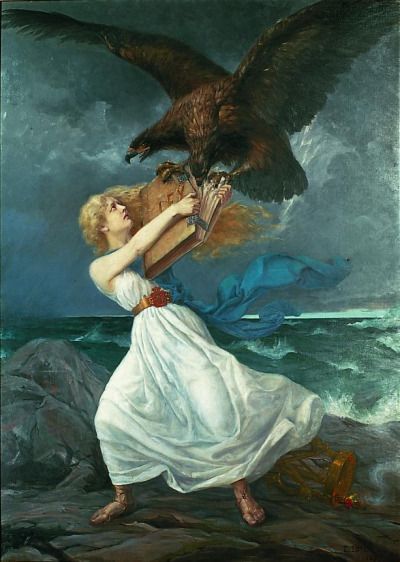 Finland Awakes ! Sakari Oramo celebrated the 100th anniversary of the Declaration of Finnish Independence with the BBC Symphony Orchestra at the Barbican Hall, London . What a sense of occasion !  A remarkable performance even by their usual high standards, so powerful and passionate that it will long be remembered.   Sibelius symbolizes Finland to the west. The popularity of his music, especially in Britain, ensured public support for Finland in its long struggle for freedom from Russia.  When the Soviet Union occupied Eastern Europe after 1945, that legacy kept Finland safe. Music as cultural, identity, shaping politics and history.

Sibelius's Press Celebrations Music was veiled protest. Ostensibly written as a fundraiser for press pensions, it struck a raw nerve at a point when the Russians were attempting to tighten control over Finland and its press. The painting at right, by Edvard (Eetu) Isto, is Hyökkäys (The Attack). (1899)  The girl represents Finlandia.  She's holding a book which contains the laws of Finland, The book wields off an attack by a two-headed eagle - the symbol of Russia.  Isto, born the same year as Sibelius,  was an artist who made paintings of nature and folkoric allegory, as did Sibelius's brother-in-law, Eero Järnefelt, and their friend, Akseli Gallen-Kallela. From paintings to music : Sibelius created the music as a series of "tableaux" depicting key events in Finnish history.
The first tableau is Väinämöinen's Song, its mysteries evoking the primeval world of the Kalevala.  In the second tableau, the Finnish people are converted to Christianity, significantly western Christianity, not the Russian Orthodox Church. This is further affirmed by the third tableau, Duke John in the Castle at Turku. Horns and pipes connect medieval Finland to Sweden and a time of prosperity, which would be shattered in the Thirty Years War, the first true "world war" when Finland was occupied by Russia in the"Years of Hate" (1714-21). The painting below is Burnt Village (1879) by Albert Edelfeldt. The woman is trying to protect what's left of her family- their village is burning in the background.   The Great Hate tableau is disturbingly dramatic, and connects well with Finlandia, though Finlandia with its heartfelt optimism will always be more popular. 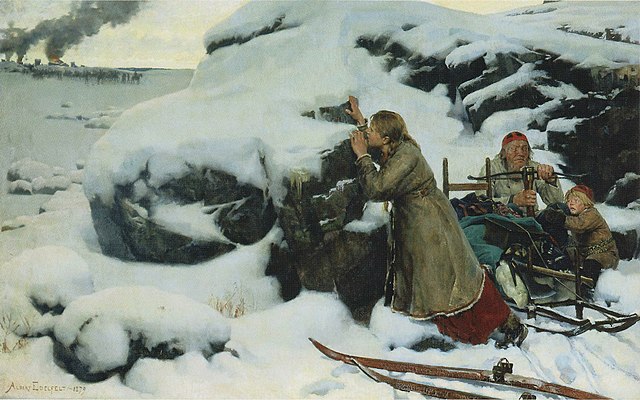 Sibelius himself conducted the premiere in Helsinki on 4th November 1899. Over the years the work underwent numerous changes, the seventh movement "Finlandia Awakes!" becoming the now famous stand alone Finlandia op 26, which also exists in several versions.  The full score was restored, edited and recorded only in 1999, so this UK premiere wasn't as long overdue as might be supposed. This new performance with Oramo and the BBC SO was so vivid that it completely eclipsed the first recording : Oramo/BBCSO is the new benchmark.
Two Pieces op 77, (1914))  Cantique and Devotion in the version for cello and orchestra followed, featuring soloist Guy Johnston, The cello is more mournful, deeper than a violin.  In the context of Oramo's programme this was appropriate because these are fairly private works, as opposed to the public persona of the Music for Press Celebrations.  But the spirit of 1899 prevailed once again, with Sibelius's Symphony no 1 op 39 (1899-1900). Hearing the symphony after the tableaux highlights the stylistic breakthrough. It's as if Sibelius's soul was being liberated. The violin part - Sibelius's own instrument - flies free, then invigorates the orchestra with its exuberance. Here, the andante sounded particularly moving, reminding me of the "hands on heart" theme in Finlandia. . Individual figures  in the wind and strings were particularly beautiful, lighting the way for the grand surges  in larger ensemble.  Tempi speed up into whirlwind, then retreat, and the heartfelt motif returned, warm and confident.  The scherzo moved briskly, opening out to a clearing where individual instruments again took centre place.  A romp, wild but purposeful: An exhilarating way to celebrate a hundred years of nationhood and artistic progress.
at December 07, 2017