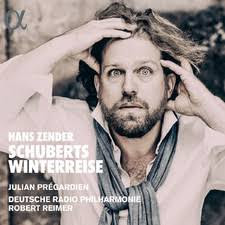 Hans Zender's Schuberts Winterreise is now established in the canon, but this recording with Julian Prégardien and the Deutsche Radio Philharmonie conducted by Robert Reimer is one of the most striking.  Proof that new work, like good wine, needs to settle and mature to reveal its riches. I first heard Zender's Winterreise in 1994, conducted by Zender himself, with Ensemble Modern and Hans-Peter Blochwitz and didn't get it at the time.  How things have changed. That first recording is good, but this new one in many ways is better, since the work is familiar enough now that performers dare take chances and venture, like the protagonist in the cycle himself.  By no means is it Schubert's Winterreise but "eine komponierte Interpretation", a  composed interpretation.  A new work, not simply an orchestration of the cycle for piano and voice. There's absolutely no way it's an alternative to the original, but rather a meditation by a modern composer reflecting on his response to the most iconic song cycle of all.

Over the years there have been many performances of Zender's Schuberts Winterreise, including Ian Bostridge's Dark Mirror, replacing the  rather corny march round the hall of the original with an infinitely more sophisticated staging by Netia Jones. (Please read more here). Alas, that production wasn't preserved for commercial release, but we can settle for this audio-only version, since Prégardien's singing is so vivid that the music seems to come alive.   This matters, for Winterreise is  uncommonly visual music, evolving in stages each matched with images from Nature. Years ago, at a Wolfgang Holzmair masterclass, Holzmair told us to listen, like an animal might, sensing which trail to follow. This is no passive, meandering journey. but purposeful, the protagonist alert to the slightest clues in his surroundings, reading the air, the way a wild animal navigates its territory.  Thus the long introduction in Zender : muffled sounds in the orchestra like footsteps trudging through deep snow.   You can't quite hear unless you're listening properly.

In Zender's Schuberts Winterreise the psychic dislocation of the piece is even stronger, allowing an almost Expressionist approach : this is not standard Lieder by any means and cannot be judged in pure Schubertian terms.  Thus the spiky whirlwind in Die Wetterfahne, the strings blowing up a storm,  so the singer's lines expand as if billowed by the wind.  Prégardien's voice takes on an edge, very different from his normal plangent tones, which is perfectly appropriate in the circumstances.  In Gefrorne Tränen, he shapes the first strophe tenderly, in contrast to the ferocity of the words "Ei Tränen mein Tränen".  Similarly "die Blumen" in Erstarrung bloom, briefly before the chill sets in with a  hard "gestorben". Der Lindenbaum begins with beautifully archaic sounds  - plucked low strings and guitar - an idea further developed in Wasserflut by the horn (evoking hunting horn) and hushed Sprechstimme passages. In Rückblick, the saxophone's dissonance moves to sensuous allure, interrupted by trombones and bassoons. No "looking backwards" here.  Thus the shimmering tenderness in Irrlicht and Rast seems haunted, and icicles spike Frühlingstraum.  Prégardien alternates lyrical song with hard spoken prose.

A posthorn rings in Die Post, as if heard from a distance, perhaps in a nightmare, with rumbling percussion, creating striking contrast with the vocal line which stretches and soars  - like a posthorn. Very eerie, but perceptive, since in Die Krähe, a crow circles round the protagonist, who will eventually follow the Leiermann into the unknown.  In Wilhelm Müller's verse, there are many similar parallel pairings, such as the dogs and rattling chains in Im Dorfe, which appear again in Die Leiermann , which Zender brings out in his orchestration.  Warlike violence in Der stürmische Morgen where turbulent percussion alternates with delicate pizzicato, segueing into a waltz like Täuschung.   Echoes of church organ and funereal drums remind us that Das Wirtshaus marks the end for most mortals, but even here the protagonist cannot rest.  Crackling sounds, winds, drums  and pipes in Mut develop the warrior imagery heard earlier, for this courage is misleading.

Thus the desolation of Die Nebensonnen. Yet again, Zender integrates the songs so they complement each other. The quasi-hymn of Das Wirthaus flashes past before a surreal but striking introduction to the critical last song, Der Leiermann, which draws together many strands that have gone before.  This is where Zender the modern composer  meets Schubert and Wilhelm Müller, and the Romantic instinct for morbid psychology.  No hurdy-gurdy as such but a more surreal version thereof, with seductively lyrical tones that suddenly distort.  "Wunderlicher Alter" sings Prégardien with firm deliberation, as the music around him dissolves into strange chords that grow ever more powerful.  Where does the Leiermann lead ?  We do not know, but it sure feels intriguing.
at October 14, 2018