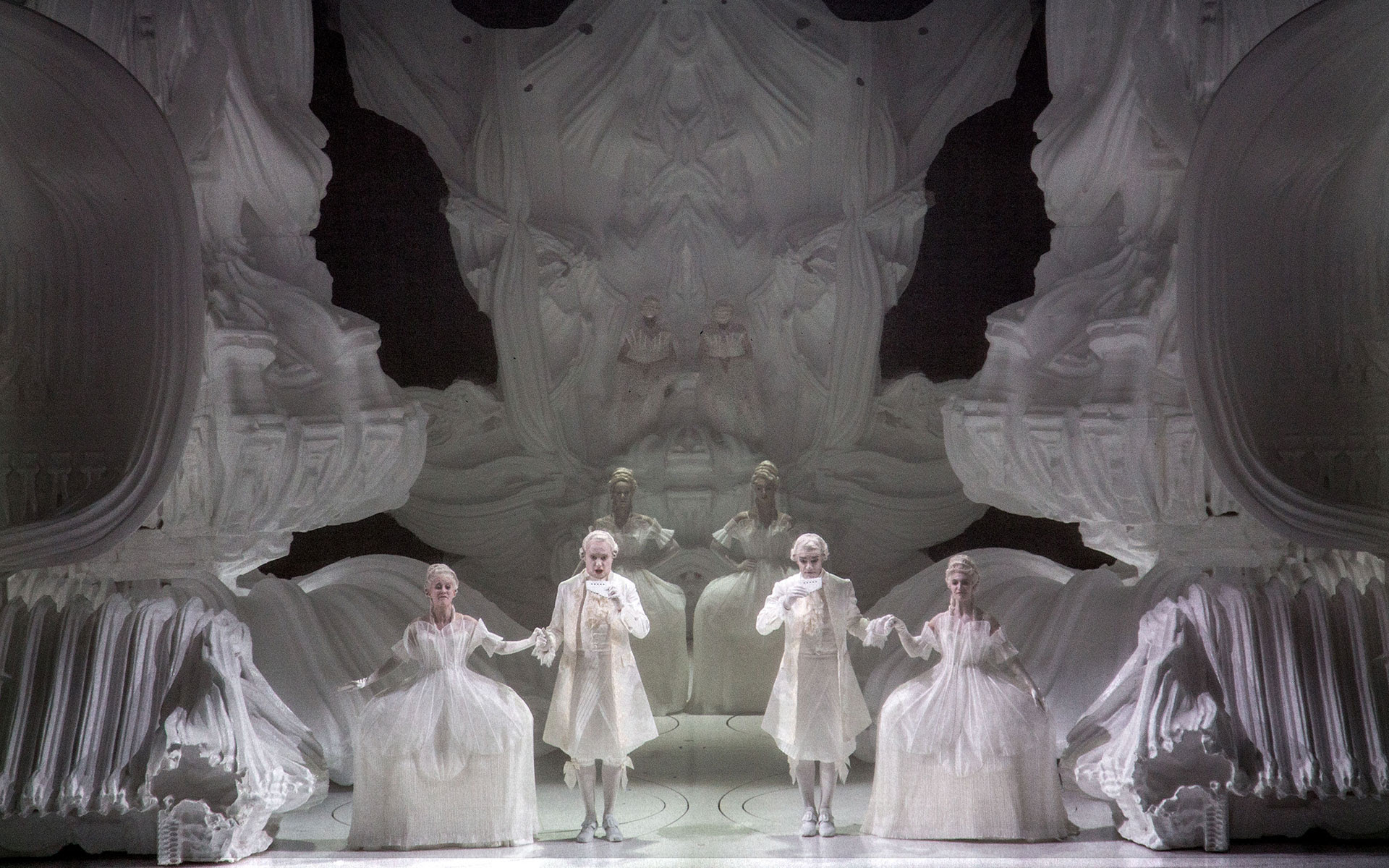 Mozart Die Zauberflöte at La Monnaie /De Munt, conducted by Antonello Manacorda, directed by Romeo Castellucci.  Part allegory,  part Singspeile, and very much a morality play, Die Zauberflöte is not conventional opera in the late 19th century style. Naturalist realism is not what it's meant  to be.  Cryptic is closer to what it might mean. It is thus ideally suited to Romeo Castellucci's intelligent, literate approach, with multiple layers of symbols, not all of which might be obvious at first, but become more rewarding with each viewing.  His sets are elegant but don't operate on appearance alone. Castellucci is a director for those who care enough about opera to make an effort to penetrate beyond the surface.  Those who want opera to be "pretty" can be content, but they'll miss out on the real depths.   Please read more about three of his recent productions Salzburg Salomé, Munich Tannhäuser, and Henze's the Raft of the Medusa.    Like composers, and conductors and artistes, good directors have a vocabulary of their own : the more you experience, the more patterns emerge.

Catellucci's approach to Die Zauberflöte  is illuminating on many levels, a term which has more meaning in this case than usual, since illumination is a concept at the core of Freemason beliefs. Freemasons are "The Sons of Light", light meaning enlightenment, self-awareness and understanding an individual's place in a community.  Members undergo rites of initiation, facing challenges as they rise within the hierarchy.  Until very recently, secrecy was also part of the Freemason ethos, further emphasizing the concept that wisdom comes not as an automatic right for everyone, but only to those who make the effort to seek it out.  Elitist perhaps, but that kind of elitism is no bad thing.

Thus the Overture is played over a dark set where a man faces a single line of light and tries to grasp it. Other men appear, in strange non-human regalia, with a sheet of coloured cloth. It's evidently a reference to something, though one I don't get, which is part of the fascination of Castellucci productions : you don't need to know everything first time round, which in itself is the beginning of wisdom.  The darkness remains, but now is backdrop to props and costumes of lustrous whiteness: singers and actors move like dolls in an elegant music box, seen through a haze of fine gauze.  Roccoco elaboration against classical formality.  For more detail on the set, which is as beautiful as icing on a wedding cake, please see HERE.  he singers move in symmetrical patterns, suggesting at once the intricate layers in the plot and the idea that the characters’ fates are controlled by forces beyond their control.  The moon, the sun, the movement of planets in the universe and the traverse of time. Lots of feathers, too, evoking nature and the birds, and Papageno (Georg Nigl) whose job it is to trap and kill.  In Die Zauberflöte the Queen of the Night (Sabine Devieilhe) pits her wits against  Sarastro (Gábor Betz) and his confrères. Men versus women, an undercurrent that runs through the piece, which Castellucci, with his appreciation of the "Eternal Feminine", knows how to develop.

Thus the interlude between the first and second acts, separating the silvery night from golden day.  At first, the impersonal "song" of machines : three women are seen using breast pumps. Real women, who lactate.  the contrast between this intimate act of selfless nurturance and the hollow drone of the machine makes a point.   As the real music starts the milk is poured into a long tube - the tube which represented light right at the beginning.  This makes sense connected  to Sarastro's aria "O Isis und Osiris" which follows, which is an invocation to protect those starting out on their journey ahead. Castellucci then inserts spoken dialogue which also should not shock, since dialogue is part of the Singspiele tradition.  Women and men on two sides of the same stage, costumed as androgynes.   As they tell of the challenges they have faced in their lives, they become individual, with personalities and backgrounds.  Compelling testimonies about coming to terms with blindness and disfiguremernt. Many of these speakers are in fact real people, not actors, and they've faced challenges most of us may (hopefully) never meet.  So anyone in the audience who can't face these brutal truths therefore fails the challenges placed before them.  "We have passed through the Night. We are very close to freedom".  So don't anyone dare knock this scene or sneer at their courage, and Castellucci's decision to let them speak. The reason the dialogue is in English is, I think, because the speakers come from different countries, but are united by experience - another concept important to this drama.

More gold - more "light"- but androgyny still prevails, since enlightenment is not yet achieved. Georg Nigl's robust Papageno provides comic relief, of a sort, but the silvery tomes that accompany his song suggest the silvery tones of the night.  For much the same reason, the Three Knaben represent immaturity.  They have the innocence of birds, for they have not experienced challenge.  Tamino (Ed Lyon) and Pamina (Sophie Kärthauser) will, however, grow up in the course of the time as they face their destiny. Different couples - professional singers and amateur speakers - are seen interacting together, coming to "know" each other and themselves.  More symmetry still, and almost painful vulnerability.  A blind woman lets herself be touched, respectfully, by men whose hands are maimed : she has learned to trust, not to judge.  Would that more audience dared the same ! Then another surprise - the Narrator (Dietrich Henschel)! He finds himself alone.  "I am not myself, but still myself.  I have crossed another horizon", he says  "But I have you, silvery light, victorious over fire".  He calls out the individual names of the non-professional speakers, who surround him, some of whom are burns victims.  "You are the truth for me - you re-assure me".  Thus the bird-like freedom and innocence of the Papageno-Papagena duet that follows and the joyous ensemble, where all are united, women and men, Night and Day, mortals and (possibly) immortals.  "Heil sei die Geweihten! Ihr dräget durch Nacht!.....Es siegt die Stärke und Krönet zum Lohn die Schönheit und Weisheit mit ewiger Kron".  A fine cast all round, conducted by Antonello Manacorda, worthy of the challenges of this visionary yet powerfully human production.  Those who can cope with challenge can catch it here on arte.tv.
at October 01, 2018