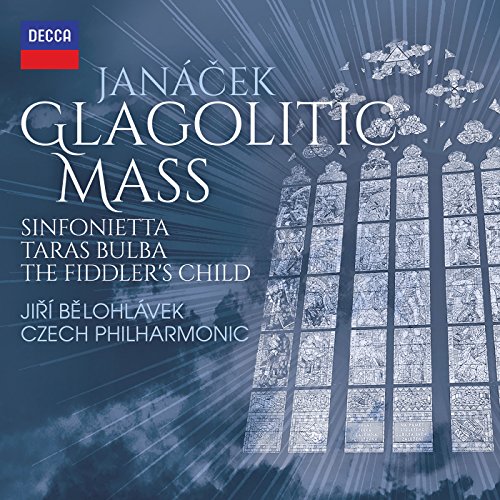 From Decca, Janáček classics with Jiří Bělohlávek conducting the Czech Philharmonic Orchestra.  Given that Bělohlávek died in May 2017, all these recordings are relatively recent, not re-issues,  and include performances of two new critical editions of the Glagolitic Mass and the Sinfonietta.  Bělohlávek was the kind of conductor who always found fresh insights into what he did, no matter how familiar he was with the repertoire, so this set forms part of a series which commemorates the golden years of Bělohlávek's tenure with the Czech Philharmonic, which revitalized the orchestra as the foremost in its field.  Recent releases have included Smetana's Má vlast, perhaps the most powerful expression of Czech identity in music. (Please read my review here), and a monumental Dvořák Stabat Mater. (Please read my review here).

Janáček's Glagolitic Mass (Mša glagolskaja) is heard here in the “September 1927” version edited by Jiří Zahrádka in 2011.  It does not of course supersede  the final, standard version of the piece.  All editions involve informed guesswork, right or wrong. Controversies can be valid : witness the on-going dispute about movement order in Mahler's Sixth Symphony.  Whatever the merits of rival editions, the September 1927 approach is distinctive and has its own merits beyond just demonstrating the composer’s working processes. The first edition of this version, by Paul Wingfield in 2008, revealed the raw potential behind Janáček's earliest ideas, and received enough performances to convince of its merits on its own terms.  Thus it cannot be dismissed as mere curiosity,  which is why Bärenreiter publishes it in two separate formats.  The first recording of the 2011 Zahrádka edition was made in September 2013 by Tomáš Netopil and the Prague Radio Symphony Orchestra, just pipping this performance made in October 2013 by Bělohlávek and the Czech Philharmonic, which is more assured in every respect.

Some time before Janáček wrote the work, the Papacy had made special dispensation for Mass to be said in Slavonic instead of in Latin as was the norm then. This was hugely symbolic since it gave legitmacy to Slavic independence at a crucial point in time. The Glagolitic Mass commemorates the ancient roots of Slavic culture, just as the Sinfonietta celebrates the birth of the modern Czech nation. The Glagolitic script dates from the 8th century, long before the Hapsburgs consolidated their grip on Bohemia. This Credo isn't about the "Catholic and Apostolic Church" so much as Janáček's faith in secular and national Resurrection.  Moreover,  "Glagolitic" masses were held in the open air, with trees instead of stone as buttresses, allowing large communities to come together in Nature and sing.  Of this piece, Janácek said: "My cathedral " was “the enormous grandeur of mountains beyond which stretched the open sky…...the scent of moist forests my incense”. Hence the idea of freedom and liberation, which is closer to Janácek's intentions than to a religious interpretation.  This version of the  Glagolitic Mass is craggier, more dissonant and more abrasive, but may reflect the rough-hewn spirit of the early church, and its possibly pagan antecedents, which is relevant since Janáček, an atheist, chose to set a language that had disappeared for hundreds of years.

Bělohlávek's approach is spirited but unsentimental,  given the political background to Czech independence not only in Janáček's time but in the decades after his death. Freedom can't be taken for granted.  Bělohlávek and his orchestra lovingly shape the "Janáček:" signatures, star motifs and quirky whips of melody that leap out provocatively against dense, angular blocks of sound.  The theme  "Gospodi pomiluj gospodi pomiluj" rises first in the orchestra, then in the chorus.  Extremely precise singing from the Prague Philharmonic Choir and the soloists Hibla Gerzmava, Veronika Hajnová, Stuart Neill, and Jan Martiník, well experienced regulars in this repertoire, and in this piece in particular. The organ (Aleš Bárta) enters gradually, almost quietly, so whern it bursts forth in the Allegro, it feels wildly explosive, inspiring the orchestra and the chorus. The Credo (Vĕruju) bursts as if a mighty force has been biding its time.  Exquisite beautiful moments like the violins in the Sanctus (Svet) before exuberant rhythms return, rushing ever forwards.  This performance was recorded live at the Rudolfinium, hence the intense immediacy.

This Sinfonietta is based on the critical edition made by Jiří Zahrádka of the 1927 revision made by the composer, in an arrangement for reduced forces by Heinz Stolba.  Given that Bělohlávek made this in February 2017, it is probably a first recording. To quote the publishers, Universal Edition Wien,"the  motivation was to prepare a new reduced version to retain the festive effect of the fanfares at the beginning and end of the work, despite avoiding a separately positioned, additional group of brass instruments as prescribed in the original. In contrast to earlier reduced versions, in the present version all passages that were intended for the separate group of brass instruments in the original version are also entirely played by brass instruments. While a total of 25 brass instruments were required to perform the original version, in the present reduced version there are only 12. Moreover, two additional woodwinds were also cut down on, reducing the original number of wind instruments from 37 to 22, without significantly impacting the sonic result".  It is shinier and leaner, and would make a dramatic statement in smaller concert halls and on informal occasions. Perhaps it's pertinent to note that 2018 marks the centenary of the founding of the Czech Republic.  Though the piece was initially written to celebrate Czechoslovakia's military, it is as much about freedom and free spirits as about the military.  If the Andante depicting the Castle at Brno does not loom as magnificently as in the original, there are compensations. The piccolo and flutes are effervescent,  and the brass sounds cheerful.  The open-air freshness works well in the Allegretto : imagine the people in the streets celebrating, waving flags and being happy.

An atmospheric account of Taras Bulba brings out the composer's Russian soul, but the loom is enlivened by characteristic Janácek feistiness - spiky staccato passages, and expansive open-ness which seems to connect the Prophecy of Taras Bulba to the strange visions of Mr. Brouček.  More connections to Svatopluk Čech with The Fiddler's Child, a modern (at the time) retelling of a folk legend.
at October 16, 2018