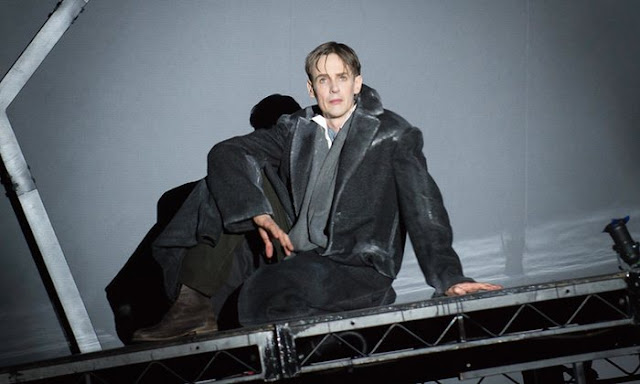 At the Barbican, London, Ian Bostridge's "Dark Mirror", a brilliant response to Hans Zender's response to Schubert's response to Wilhelm Müller's poetry. Bostridge's journey into the dark soul of Winterreise explores uncharted territory, opening new routes into meaning. Winterreise is a work of such genius that you can, like Bostridge, spend a lifetime contemplating it yet still find more to learn. Hence the numerous reworkings and stagings to which Winterreise lends itself so well. This, however, must be one of the most fascinating, since it generates so many insights.

Zender';s Winterreise delves into the inner musical logic, bringing out the  mechanics of the protagonist's mind, going round in obsessive circles. yet always compelled forward.  Hence the mysterious rustlings, and almost hypnotic pizzicato heartbeats, and tense bursts on wind instruments, exhaling and drawing breath. Very physical. As the pace picks up, a familiar melody, but oddly mechanical. The protagonist is determined to keep going lest his feelings overwhelm him. The vocal part starts normally enough, but suddenly, from "von einem zu den andern", words repeat mechanically, and the orchestra whizzes into a manic march.  Just as suddenly, a switch back to normal with Fein Liebchen, Gute Nacht but now we know the lyricism is forced. The protagonist can't give in to mere beauty but must struggle on.  The stops and starts and sudden flurries of recitation illustrate the protagonist's dilemma. Like a machine, he winds down, yet lurches back into life. Like an animal, he listens, picking up clues as to direction. Schubert's music is often quite driven - think Der Musensohn - so this obsessiveness is valid.

Zender's music is graphic, but also abstract enough that it's not mere illustration. Sudden turns, strange distorted sounds. Sometimes the singer recites rather than sings, as if he's trying to pick up an invisible trail.  The music throws you off-course, so you're as disoriented as the protagonist and  start thinking like him. The instrumentation evokes the sound of wandering folk musicians, reminding us of the tradition from which the Leiermann comes. The protagonist rebels against constraining systems.  It's no accident that he strides away from houses into the wilderness. The "Expressionist" visuals were also a good reminder that the boom in German art film in the 1920's had its roots in Gothic Romanticism.

Netia Jones's images focus, too, on this "inner landscape". Though we see the ghost of a tree and glimpses of barking dogs, the stage resembles an infernal machine, with dangerously sloping angles and hard metallic surfaces. We catch glimpses of cogs and wheels, grinding relentlessly together. The hurdy-gurdy is a primitive instrument which drones, and is ground relentlessly, rather than played. At the end, we don't see the Leiermann as bedraggled beggar, but the image of the cogs and wheels grows huge, behind Bostridge's gaunt figure. Seldom has the identification between the Leiermann and the protagonist connected with such power.  "Wunderlicher Alter ! Soll ich mit dir geh'n ? Willst zu meinen Liedern, Deine Leier dreh'n ?"  Jones's images also connect the first song with the last. Dogs howl. The protagonist will ever be an outsider, threatening  conformity, whatever might be his fate.  Is the Leiermann a harbinger of death or the hallucination of a deranged mind? Perhaps some need such comforting thoughts to distance themselves from the protagonist, but I think there is much evidence to suggest an even more challenging outcome. Although the images in Winterreise are pictorial, their symbolism runs much deeper.

This Dark Mirror Winterreise also benefits from the unique quality of Bostridge's voice. He can infuse seemingly straightforward lines with layers of complex meaning. His voice stretches, as if probing the recesses of the mind, teasing out the surreal from the straightforward.  He's incomparable in Britten.  Bostridge's voice curls, tightly coiled like a spring, leaping upwards when Zender's lines erupt. There was a wonderful, haunted quality to this singing,  utterly faithful to the undercurrents in meaning. The wunderliches Alter is a vision, whether he's real or illusion.  Bostridge's hushed tones  suggest both horror and wonder in the English sense of the word.  As so often, Bostridge's timbre suggests an exotic instrument, again, in this case , in keeping with the implicit musical logic of Zender's conception.  Baldur Brönnimann, a sensitive interpreter of new music, conducted the Britten Sinfonia.  When - it's not a question of "if" - Bostridge's Dark Mirror reaches DVD, it will be a must for anyone seriously interested in Winterreise. Those of us fortunate enough to experience it live will never forget the experience.  Please also see my previous post on Hans Zender's Winterreise. 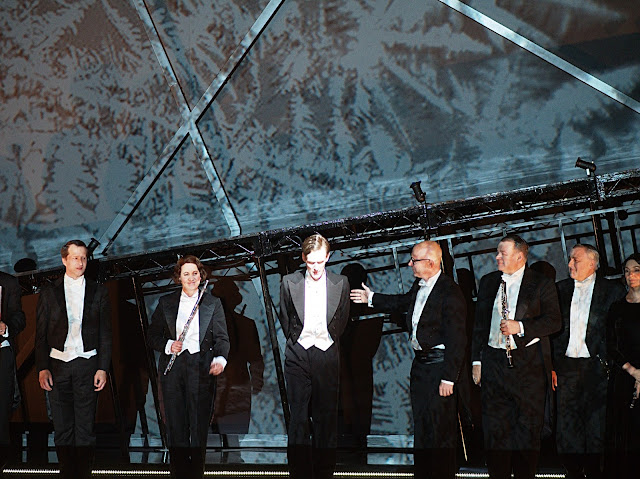