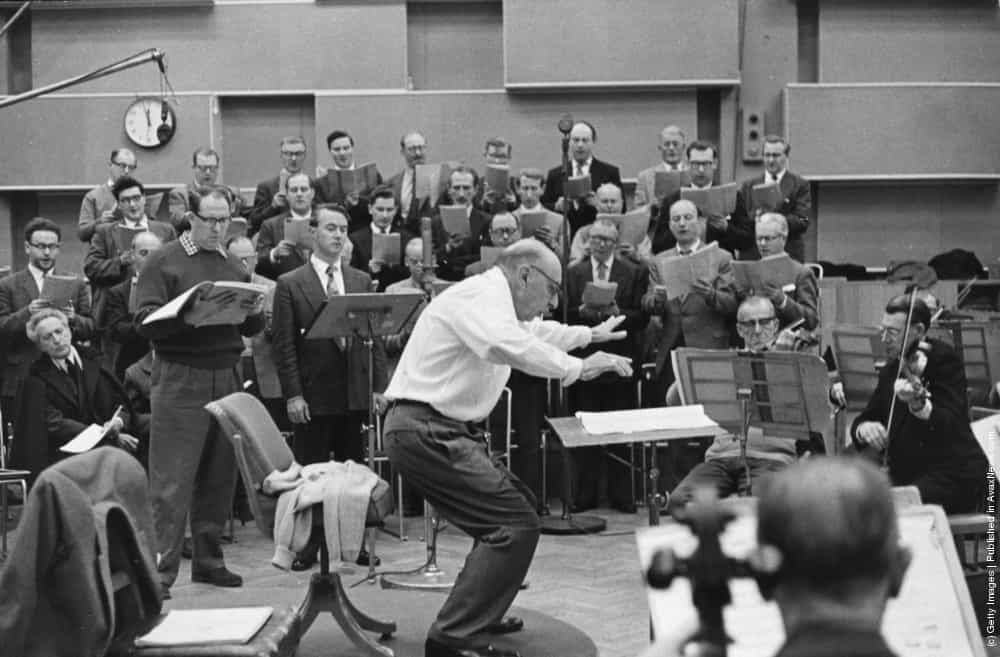 "This is the BBC Third Programme. Tonight, in the Royal Festival Hall, Igor Stravinsky is to conduct  a performance of his oratorio Oedipus Rex. The narrator is Jean Cocteau, who wrote the text. This is the first time that Stravinsky and Cocteau have appeared together at a public concert in London. Here is the cast: Helmut Mecchert (Oedipus), Irma Colassi (Jocasta), Thomas Helmsley (Creon) Roger Stalman (Messenger), Duncan Robertson (Shepherd), Michael Langdon (Tiresias). with the BBC Mens Chors trained by Alan Melville, and the BBC Orchestra, leader Pail Beard.  Tonight the part of the Narrator is spoken by Jean Cocteau, in French"

Imagine that spoken with clipped uptight formality !  the concert took place on 8th November 1965. Thankfully, the broadcast tape was preserved and  can still be heard if you hunt around.  The male singers grew up in a time when Latin was an essential part of the school curriculum. so perhaps we're getting "public school accent" Latin, but it's consistent. Nothing "distanced" in this powerful performance, perhaps because it's so tight and disciplined.  Stravinsky conducted Oedipus Rex many times, including London in the 1920's and later in the 1960's,  but this is legendary.  The narration is pungent and punchy. No RADA gentility  here. The photo above was taken in rehearsal before the RFH concert. This is the tradition the BBC stands for. Long may it be preserved. If Murdoch and his "market forces" can't compete, it's too d--- bad.