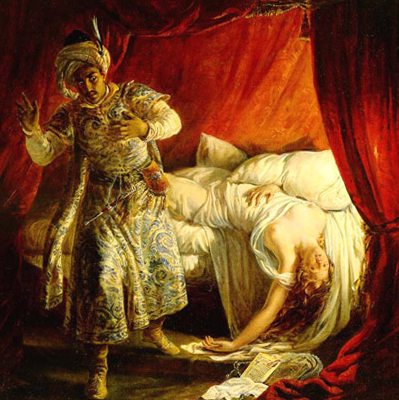 Gioachino Rossini's opera Otello  broadcast here on BBC Radio 3 - very different to Verdi's Otello and, indeed to Shakespeare's original play. The opera premiered in Decemeber 1816,  at a time when  Shakespeare was being rediscovered anew in continental Europe. Otello was overshadowed by the popular success of The Barber of Seville, but it's a very fine piece, and greatly cherished.  Technically it's very demanding, but fortunately there are voices to do it justice.  There are several good recordings and this broadcast is from the Gran Teatre del Liceu in Barcelona in February this year. We could dream of  Bryan Hymel as Rodrigo and Jonas Kaufmann as Otello, but this cast  is pretty good. Jessica Pratt sings Desdemona, reprising the part she first created at Bad Wildbad in 2008,  Dmitry Korchak sings Rodrigo, Yijie Shi sings Iago and Gregory Kunde sings Otello. The conductor is Christopher Franklin.

Notice: Otello isn't first, though he's by no means the least.  Rossini's interest in the interplay of voices led him to focus on the relationship between Rodrigo and Desdemona; he developed the characters, giving them spectacularly beautiful music to sing to.  Some of the arias in this opera are bel canto trailblazers, which almost literally defined the style. The tenor voice has great flexibility, lending itself to glorious coloratura display.  Listen out too for the duets and trios, where the subtle gradations in voice type create complex, interweaving patterns of sound. Rodrigo, Iago and Otello are bound together here by more than fate.  Desdemona and Emilia (Lidia Vinyes-Curtis) have lovely solos and duets.  Elmiro, Desdemona's father (Mirco Palazzi) is a bass, providing ballast.  The First Act sets context with its glorious orchestral colour, but already the music hints at something wayward and individual, in the solo instruments flying capriciously above the tumult. The most flamboyant passages occur in the Second Act. Rodrigo's aria "Che ascolto? ahimè, che dici?"  is a killer tour de force, ending with dramatic ornamentations on the word "Traditor". Normally passages like this stun a house into silence, but Rossini follows it with many more good moments, one after another. the cumulative effect is intoxicating.

Vocal gymnastics aside, the focus on Rodrigo and Desdemona fleshes them out as personalities with whom we can identify. The Gondolier's song adds a haunting dimension, setting the mood for Desdemona's Willow Song with its delicate, sighing harmonies.  When violence intrudes on this atmosphere of melancholy beauty, the exchange between Otello and Desdemona is fast and furious.  The strings scream, the orchestra whirring as if driven by demonic winds. Otello and Desdemona are in fact singing similar words, though they're at cross-purposes. "Mori , infedel" cries Otello. As if stunned into horror, the orchestra reiterates stabbing staccato.  The Doge, Elmiro, Rodrigo and the chorus rush in but it's too late. Otello kills himself  "Punito m'avrà..." And suddenly, the drama ends, in shock.

If you like Rossini's Otello, you'll like his Maometto II - another outsider more hero than villain - which I heard at Garsington. Read my review of that HERE and get the CD. Lots on Rossini opera seria on this site.