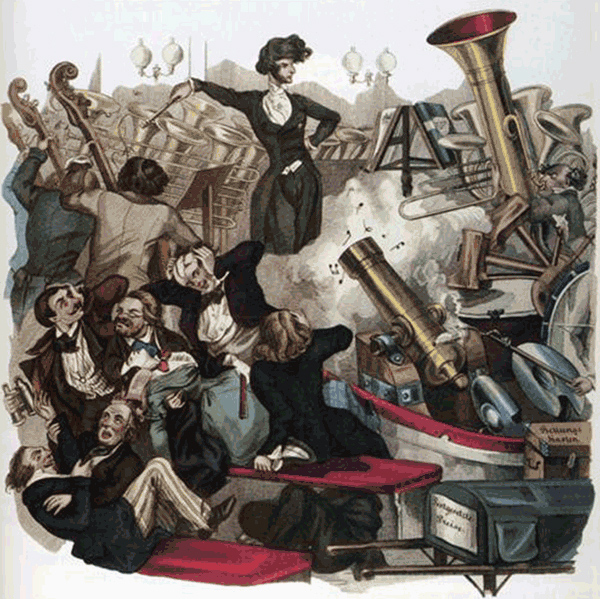 Perceptions of  Hector Berlioz Roméo et Juliette (Op17 1839) have been shaped by performance practice filtered through recordings, which is fair enough, since recordings reach more than live performances. Given Berlioz's fascination with Shakespeare and other things English, it's perhaps not so surprising either that English conductors dominate recordings.   Everyone's grown up with Colin Davis, for example. Over the years, though, my feelings about Berlioz have been developing on different lines, thanks, probably, to getting immersed in John Eliot Gardiner,  Historically informed performance isn't about instruments so much as about understanding a composer on his own terms, and imagining what he might have envisaged.

In Berlioz's own time, he was very much avant garde.  His Grand Treatise on Orchestration (1843)  championed among other things the saxophone, invented only three years before and still very much experimental.  The picture above shows Berlioz conducting to the horror of his audience, the figures in the foreground supposedly include Franz Liszt. Recently a friend recommended listening to Pierre Boulez's Roméo et Juliette, with the Cleveland Orchestra, recorded live in 1970, though not issued until some years later.  How distinctive it sounds !  Boulez wasn't conducting a period orchestra but he seems to have understood why Berlioz used instruments like the ophicleide. They aren't timid ! Hence the fanfare in the introduction, the quirky trumpets and bassoons. the lushness of the harps  and above all the sassy punch of the strings, pulling everything together with dramatic forward thrust.  We hear the wayward dance figures, and the sinister, almost demonic undercurrents. Roméo et Juliette is neither a stage play nor conventional opera but an innovation: music theatre for orchestra. 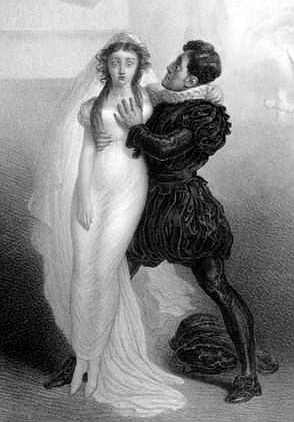 Shakespeare carried no cultural baggage for continental European audiences in Berlioz's time, so the composer could do pretty much his own take on the story, using the Garrick version of the play brought to Paris in 1827 by Charles Kemble, which  Berlioz attended and where he became infatuated with Harriet Smithson.  The picture at left shows Smithson and Kemble in a production in the 1840's. In an age before close-ups and amplification, theatre practice would have to have been more exaggerated than we're used to now. Perhaps Berlioz, a theatre critic, intuited that good orchestral writing had the potential to express feelings in greater complexity than most actors at the time were capable of. The extremes in this music reflect stage practice, yet modified by the sophistication that orchestral subtlety can provide.  This is an intense performance, made all the more powerful because Boulez draws from the dramatic tension inherent in the music itself : a composer's insight into interpretation, that springs from within.

Berlioz's Roméo et Juliette isn't about the lovers so much but about cross-currents : feuding families, crowds versus individuals, beauty versus violence and in the midst of all this, an element of supernatural magic that is more "Gothic" than Shakespeare.  Structurally it's tight, the Prince holding forth in the beginning and the brilliant Friar Laurence monologue at the end.  Montagues and Capulets rip each other apart,  but Friar Laurence's intelligence and humanity give Berlioz's Roméo et Juliette its power.