Slow moving but strangely compelling, Troll-Elgen, a Norwegian stumfilm (silent) from1927, directed by Walter Fyrst (1901-1993). It's fascinating because it describes a world poised between the past and the modern, magic and reality. Think of Edvard Grieg's song cycle Haugtassa, where a girl lives alone in the mountains, communing with unseen spirits. Think also of Carl Maria von Weber's Der Freischütz, where a young huntsman must  prove himself, even if it means dealing with the devil.  The very pace of the film is part of its power, forcing us inward, cleansing us of the toxic muzak that passes for life.  Troll-Elgen is also important because it connects to the aesthetics of culture. Read Daniel Grimley Landscape and Norwegian Identity (2006), or, for that matter, Simon Schama : Landscape and Memory (2004) on forests and German art.

Fyrst's Troll-Elgen was based on the 1921 novel Troll-Elgen by Mikkel Arnesen Fønhus (1894-1973). Notice the time frame : Norway became independent from Sweden only in 1905   Literature and culture strengthened Norwegian identity, just as language and culture helped Finland break away from Russia. 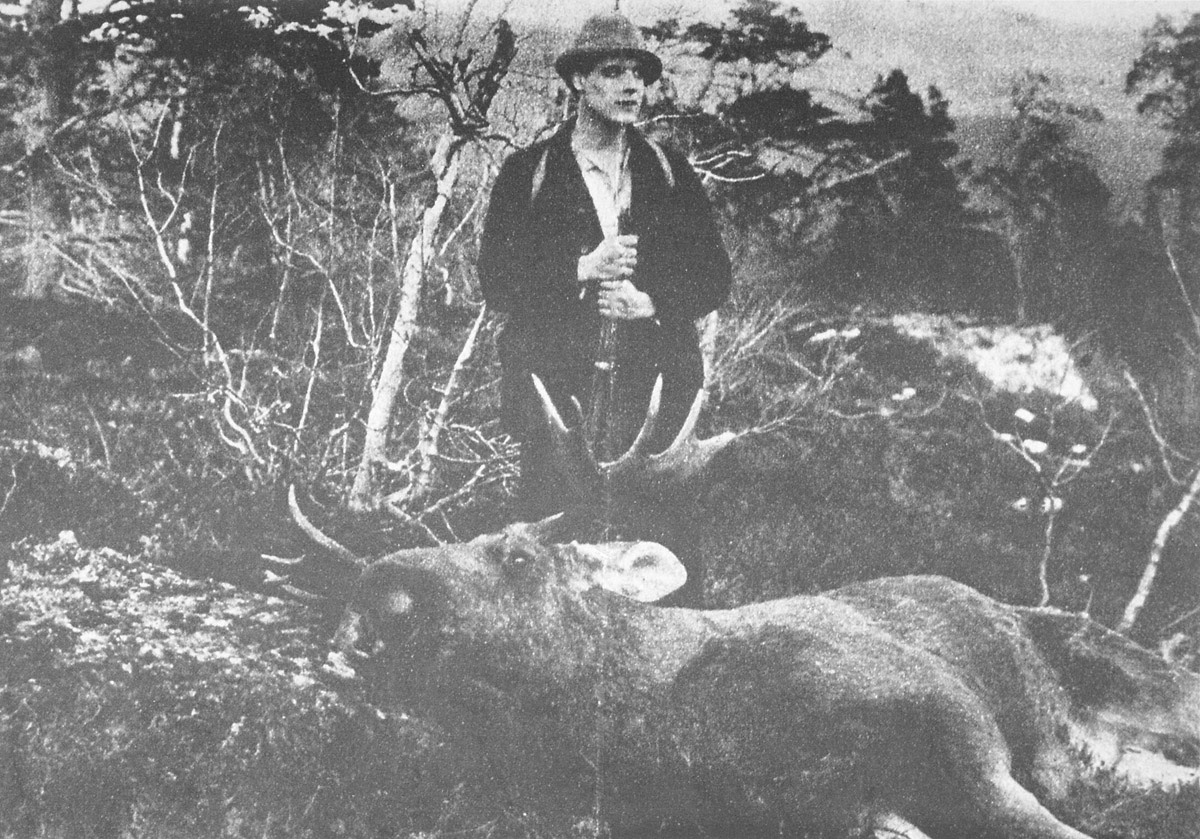 The film begins with a panoramic shot of the mountains, densely forested and hostile to humans.  Wonderful landscape shots fill the screen throughout, emphasizing the beauty and power of nature.  In the wilderness lives an ancient elk, the Troll-Elgen , raely seen by humans, reputedly supernatural. Gaupa the huntsman tries to kill it but is driven insane. Huntsmen, like elks, are happiest in the woods but their lives are filled with hardship.  The craft in which Hans lives with his widowed mother is  utterly spartan. Even the rich don't do luxury. The local landowner, Rustebakke, throws a party, but his guests eat off wooden tables, No linen. There's no plumbing. Water is kept in a bucket and ladled into bowls.  Hans is forced to work on Rustebakke's farm, but he and Rustebakke's daughter Ingrid fall in love. The social divide between landowner and tenant is so great that he can't win Ingrid. "Unless", her father says, he can do something impossible, "like shoot the Troll-Elgen".  Gunnar, a horse dealer, and Hans fight over Ingrid. Gunnar gets stabbed. Hans runs away to the big city, thinking he's now an outlaw. He gets a job in the circus as "The Texan" sharpshooter.  Ingrid runs away too, hoping to find him.There's quite a bit of social comment in the film. Hans's boss abuses female employees and the relative Ingrid lodges with turns out to be a lecher. Separately, Ingrid and Hans return to the mountains, rejecting corrupt society.

Hans looks after mad old Gaupa, from whom he learns that Gunnar didn't die, so he isn't being hunted by the law after all.  Gaupa gives Hans a magic bullet, with which he fells the Troll-Elgen.  Ingrid is living alone in a remote cottage. Gunnar comes and attacks her. Hans walks in and the two men fight, but this time Rustebakke and his men intervene.  Hans and Ingrid marry. Presumably with elk for dinner. Or symbolically, anyway.  Although the plot is simple, the film is beautifully shot.  When Hans pursues the Troll-Elgen we see more panoramic vistas, and see the elk galloping over steep slopes and valleys, running along the river, its legs immersed in water. How did the camera crew set that up? The elk doesn't look tame.  The print is in good condition. Whispers of colour appear, too elusive to be remnants of hand tinting. I don't know the technology enough to know how that was done, but the effect enhances the magic of this film.
at May 11, 2016

Tinting was most commonly done by submerging film in a dye mixture. It fades heavily with time so what you describe sounds like the remnants of that, and well-preserved. When a print is restored, they do it from the negatives if possible, which would be B&W, and then for DVDs they might approximate the original tinting with a digital enhancement (using faded reference prints if available). So the version of Troll-Elgen that's on YouTube at the moment has a digital tint added to it.

Great post! Don't think I've seen any Norwegian silent films, and intend on checking this one out.

Thank you so much, Chris ! It's wonderful to share stuff like that ! Thank you again. There were lots of Scandinavian and Finnish movies from as early as around 1910 and very distinctive. Some directors real masters like Sjostrom and Dreyer. Usually I write about early German and Chinese film, which no one else does in English. So please, welcome back and have fun browsing this site

Yes, I've seen Sjostrom and Dreyer but that's about it. I do like to look for the lesser known jewels, too. They're harder to get access too, so I'm glad you're article prompted me to discover this on Youtube!

I originally came to read your blog for the classical music reviews (Proms probably, I tune in via radio from Texas), but I'm delighted you write about my first love, cinema, too. So, thanks for all you write! It is really significant.