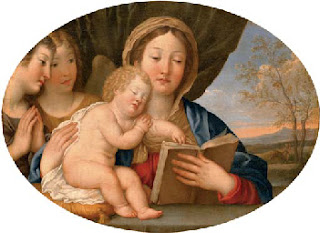 On 8th October 1888, from Unterach, outside Vienna, Hugo Wolf wrote to his friend and patron, Friedrich Eckhardt, about an exciting new project. A volume of songs to texts by Eduard Mörike! As usual with Wolf, once the floodgates of inspiration exploded there was no holding back. Wolf "scrawled at breakneck speed" (described by Frank Walker who saw the original letter). He'd written ten songs in 9 days.

"All these songs are truly shatteringly composed. Often enough the tears rolled down my cheeks as I wrote. They surpass in depth of conception all the other settings of  Mörike. I am working day and night. I  no longer know what rest is.....Ask the publisher of Mörike's poems for a portrait of the poet in his youth. . But be quick, be quick, be quick ! Mörike must appear before Christmas or I'll kill both you and myself".

Yet how radiant the song Schlafendes Jesuskind is, so gentle that it's difficult to sing, since the line should float, barely held up by breath.  Perhaps it isn't even a song for concert performance, but for private contemplation. I won't upload any recording as none of those on YouTube are good, even alas, Fischer-Dieskau. This song is best heard sotto voce, as if it flows from a state of unconscious rapture. Divine serenity, understated and pure. The poem was inspired by a painting by Francesco Albani (1578-1660) in which the painter shows the heavenly infant lying on a plank of wood which one day will be the Holy Cross, "dem Holz der Schmerzen".  Don't wake himu! Let him sleep, presumably oblivious.