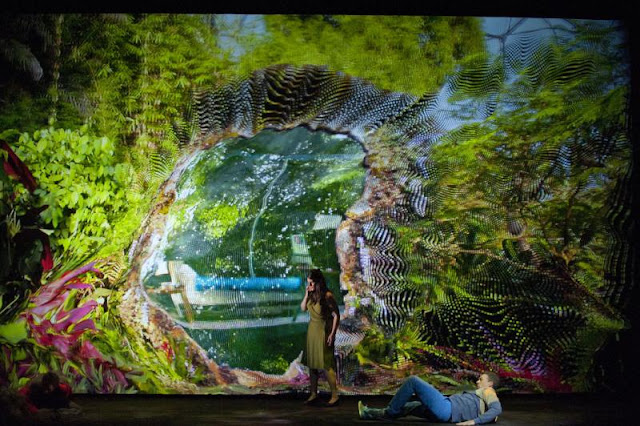 Michel van der Aa's Sunken Garden had its world premiere at the Barbican Theatre, under the auspices of the ENO.  Van der Aa is a well-respected artist, closely associated with the Nederlandse Opera.  His Up Close, presented together with Pierre Audi's Liebestod in 2011, won a Gravemeyer award. Sunken Garden is a huge leap ahead from Up Close, and also from the earlier After Life (reviewed here), also presented at the Barbican and in Amsterdam. Sunken Garden is altogether more ambitious, and successfully achieves van der Aa's dreams of linking different art forms to create a Gesammstkunstwerk for the age of technology.  It will divide opinion, however, as anything truly experimental usually does.

Much will be made of its technological inventiveness, but don't be distracted. At heart, Sunken Garden is a true opera in the deepest sense.  It's about people and how they communicate, or don't communicate. As human beings we don't communicate in any one way, but on multiple levels, consciously or unconsciously. We absorb data from all sources.  What matters is how we process that information.  Thus van der Aa, his librettist David Mitchell and his visual effects team create a multi-level, multi-dimensional whole from which we take as much as we can.

We could remain on the surface, like Portia Jacquemain (what a name!). She runs an art gallery but is not an artist. She spouts babble because she can't cope with real communication. We can stop there and snigger. But van der Aa is making a wry joke. Jacquemain ( played by Caroline Jay) is shallow. She's estranged from her daughter Amber who seems to make a mess of her life but engages with the world around her, and with the artist Toby Kramer, admirably played by Roderick Williams. Kramer composes with video, in much the way that a composer assembles notes to make music. Like Amber, he cares about people, and wants to find out what's happened to his subject Simon Vines (Jonathan McGovern).  Significantly, Zenna Briggs (Katherine Manley) morphs from persona to persona. She starts off as a wealthy patron of the arts, but drops Kramer when he starts getting too close to the truth. It turns out that she's not a patron of the arts at all but a sinister figure who, vampire-like, lives off the psyches of people who think and feel for themselves.

Don't be distracted by the complex plot. Think of Lewis Carroll's Alice in Wonderland. Nothing seems to make sense, yet there's a crazy sense of momentum, such as one finds in dreams. Like Alice, Kramer descends into a sunken garden hidden below the flyover. Suddenly everything glows in surreal, unnatural colour. The 3D effects aren't a gimmick but an intelligent theatrical commentary. We're in a psychedelic dream where everything is more real and more false. You can escape by taking off the 3D glasses, but how flat things seem in comparison. Even if you can't follow the narrative, seeing the water from the "vertical pond" implode and explode is great theatre. Some of the most effective scenes are fairly straightforward, such as the shots of Roderick Williams against a flat background with diagonal beams. 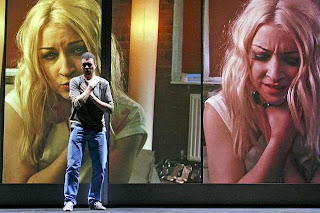 The technological special effects are themselves a comment on the way we communicate. Kramer films. Amber texts. Jaquemain chatters. In After Life, van der Aa used clips of real people talking and spliced them with scripted film.  In Sunken Garden, he uses actors whose speech is peppered with inconsequentials. But that's exactly how "real" people speak. The ums and ahs of conversation are part of the process of communication, and of formulating ideas. If we look more closely to these "people" we begin to notice that they, too, are as unnatural as the 3D scenery in the garden. Toby Kramer clearly isn't American, despite his talk of Omaha. Sadaqat Dastani (Stephen Henry) is also a caricature. Mental hospitals aren't that luxurious.  And since when did landladies like Rita Wales (Alwyne Taylor) dress in cashmere and pearls and live in National Trust gardens? Sadaqat is supposed to be insane but he identifies Amber's drawings of the sunken garden and points Kramer to Iris Marinus, the "doctor". It's a gorgeous role for Claron McFadden, who, like Roderick Williams, helped create After Life. She's good at being over the top. He's good at being matter of fact.

Zenna Briggs morphs from persona to persona, til her true malevolent nature is exposed. Katherine Manley sings the difficult part well. Amber (Kate Miller-Heidke) is in real life an indie star who can sing though not with Manley's range. She's not what she seems either. Her hair, make-up and clothes are so unnatural that they're playing roles as well.

Van  der Aa's music is very expressive, much more direct and visceral than, say, George Benjamin's Written on Skin (reviewed here). He worked with Louis Andriessen, for whom communication was paramount. Andriessen, for example, was involved with political music theatre where he tried to challenge the normal hierarchy of performance. The sung and spoken text is often unclear. There are no subtitles. You have to struggle to -ollow what's happening in Sunken Garden, but  that's the whole point. As in real life, nothing is clear cut. You have to listen to the music, and assemble all the information in this opera in your own mind. It helps a lot that the conductor  was André de Ridder, one of the best new music specialists in Europe, who understands the multi dimensional levels in this tightly constructed score.

Van der Aa's Sunken Garden is so different that it would be a miracle if everyone could respond to it in the same way. But perhaps the secret is to enter its strange world on its own terms.In the real world, we communicate in many different ways other than through words alone. We listen to all kinds of verbal and non-verbal signals, and we use visual and subconscious images. Sunken Garden is good opera because it transports us into an artist's vision and makes us engage with our feelings. Or not, if we prefer.