Not Shakespeare, not Mendelssohn but Hollywood's Midsummer Night's Dream. Great play, great music and the hottest stars of the day? Could the combination fail to succeed? Midsummer Night's Dream the movie (1935) combined classics with film technology attempts to create the ultimate Gesamtkunstwerk. What a pity they din't have colour or computer animation! This is a film that screams excess. Everything's pumped up. The Duke's wedding takes place in a vast baroque palace, attended by rows of Indian Princes in turbans. The Mechanicals seem more out of place than ever. 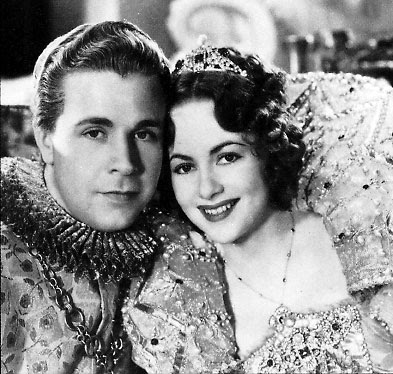 Hollywood's Midsummer Night's Dream is a strange beast which, despite its ambition, is very much a portrait of the time and place in which it was made. Dick Powell plays Lysander, for example. He was a matinee idol and a crooner, usually cast as a romantic lead who could do comedy, too. Hear him sing tunes from Mendelssohn. Because he was a such a star, the film lingers on his part more than strictly necessary. It's hard to square Powell's persona with a subordinate part: he looks and moves like a 30's screen idol. I don't think he was miscast. He's hilarious and almost steals the show.Demetrius and Helena  barely register.

Powell's  Hermia is Olivia de Havilland. She was being groomed for stardom, so this film was her big breakthrough. The camera loves her, and her face glows, but her lines are delivered with such campiness it's hard to imagine her passionate Scarlett in Gone with the Wind, or 30 years later, Hush, hush sweet Charlotte. Puck is no other than Mickey Rooney. It's perhaps the strangest role ion his career, but he's perfect - ugly and barbaric but athletic. He makes the corny dialogue sound anarchic. He was only 15 at the time. The Mechanicals are so fake they're embarrassing. 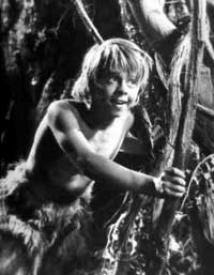 It wouldn't be fair to blame the wooden acting on Max Reinhardt who directed in German. He was an important Weimar director and knew his Shakespeare. Something must have got lost in translation. In any case, Shakespeare was augmented by scriptwriters who ratcheted up the dialogue, adding extras in fake archaic style that ruin the flow of Shakespeare's original. Mendelssohn doesn't escape either. Not only do we get music from his Midsummer Night's Dream, we get extracts from the Scottish and Italian Symphonies and extra snippets which are pure Eric Korngold.  To throw us off still further, the Mendelssohn parts are radically re-orchestrated and clumsily played,

But this Midsummer Night's Dream is fun because it's a thirties Hollywood musical through and through. Authenticity doesn't come into the equation. Instead, we see special effects that must have been state of the art at the time. The forest is a Maxfield Parrish fantasy of undergrowth and elongated verticals. Oberon and his cohorts are clothed in myriad tinsel lights, shining like Xmas trees.  Tatyana's hair is backlit so it shines like a golden halo. Pure 30's glamour shot! The fairies fly on hidden guy ropes. Some are played by ballerinas, who dance in formation like chorus girls. No finesse in the dancing, even though the ballet was choreographed by Bronislava Nijinska, Nijinsky's sister. In 30's style, the film gave employment to dozens of dwarves. Some, however, are costumed as monstrous grotesques. But Oberon's minions can be sinister. As Bottom discovers, the night unleashes ugliness as well as dreams.
at April 21, 2013