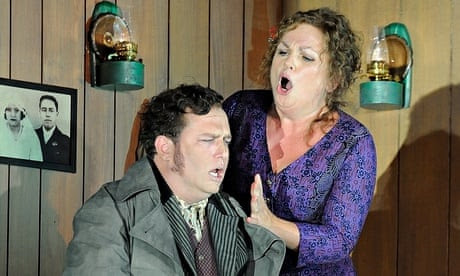 At the ENO, Puccini's La fanciulla del West becomes The Girl of the Golden West. Hearing this opera in English instead of Italian has its advantages, While we can still hear the exotic, Italianate Madama Butterfly fantasies in the orchestra, in English, we're closer to the original pot-boiler melodrama. Madama Biutterfly is premier cru: The Girl of the Golden West veers closer, at times, to hokum. The new ENO production gets round the implausibility of the plot by engaging with its natural innocence.

Bright lights greet curtain up, startling the audience. More fun to come as the music evolves. In The Girl of the Golden West we're enjoying Arcadia in Wild West costume, the stuff of childhood dreams and simple homilies. The men at the Polka love Minnie for her good nature and rough edges, but they turn savage without much provocation. So much for her teaching the Bible.  Perhaps there's a reason why Ramerrez (not Ramirez) is a Mexican.  As soon as Minnie reappears the would-be killers turn back into lambs. Where will Minnie and Ramerrez go when they leave California? Both are now displaced from a place where they belonged. But let's not bother ourselves with too much detail. Richard Jones's production, with designs by  Miriam Buether,  presents the opera as plain good fun, rather like Minnie herself, not in the least bit sophisticated but with her heart in the right place. As usual, Jones takes his cue from the music. In this opera, Puccini employs special effects, like wind machines and "gunshots" in the percussion, There are many good moments in the music, like 'Ch’ella Mì Creda Libero', Ramerrez's big 'Un bel Di' moment. But in general, this music works well  as pure, uncomplicated fun. Not for nothing I've been calling the opera has been called the first Spaghetti Western for the last 40 years..

Casting Susan Bullock as Minnie is a stroke of inspiration. Bullock is a Wagnerian, so she has the timbre of a Brünnhilde charging into action to protect the wronged. Puccini doesn't give Minnie long heroic passages to develop her personality, since after all, she's plainfolks, who falls for Mr Johnson because he treats her like a lady. So Bullock's innate sense of style does for Minnie what fancy clothes and tight shoes can't do. Bullock's words ring out with desperate heroism. Minnie has seen an alternative to the life she leads. Like Senta, she's prepared to risk all for her man. Bullock's portrayal adds wonders, bringing out humorous levels in this opera that might get missed in too prosaic a reading. The effect would be heightened even more if she sang with her normal English accent, but English audiences, much given to literal fake accents, probably wouldn't understand why. Bullock's natural good nature warms Minnie's personality and creates a convincing character.

Peter Auty sings Ramerrez/Mr Johnson. The fit is good.  Auty's experience adds authority and depth. In the second act, Minnie tries, ineptly, to seduce Mr Johnson, Auty shows how Ramerrez's nobler instincts motivate his actions. Auty's resolve suggests why Minnie is drawn to the stranger, so different from the rabble around her. Again, this isn't obvious in the libretto but a sign of sensitive directoral interpretation. Richard Jones's staging is far more perceptive than meets the eye, but probably too subtle for some.

Craig Colclough  sings Jack Rance. His voice is technically secure, but the portrayal is relatively straightforward, allowing greater definition to Minnie and Mr Johnson/Ramerrez. It was good to hear Graham Clark again, albeit in the fairly small part of the bartender. Clark is a national insititution, and a long-term stalwart of the ENO. His very presence makes a statement.