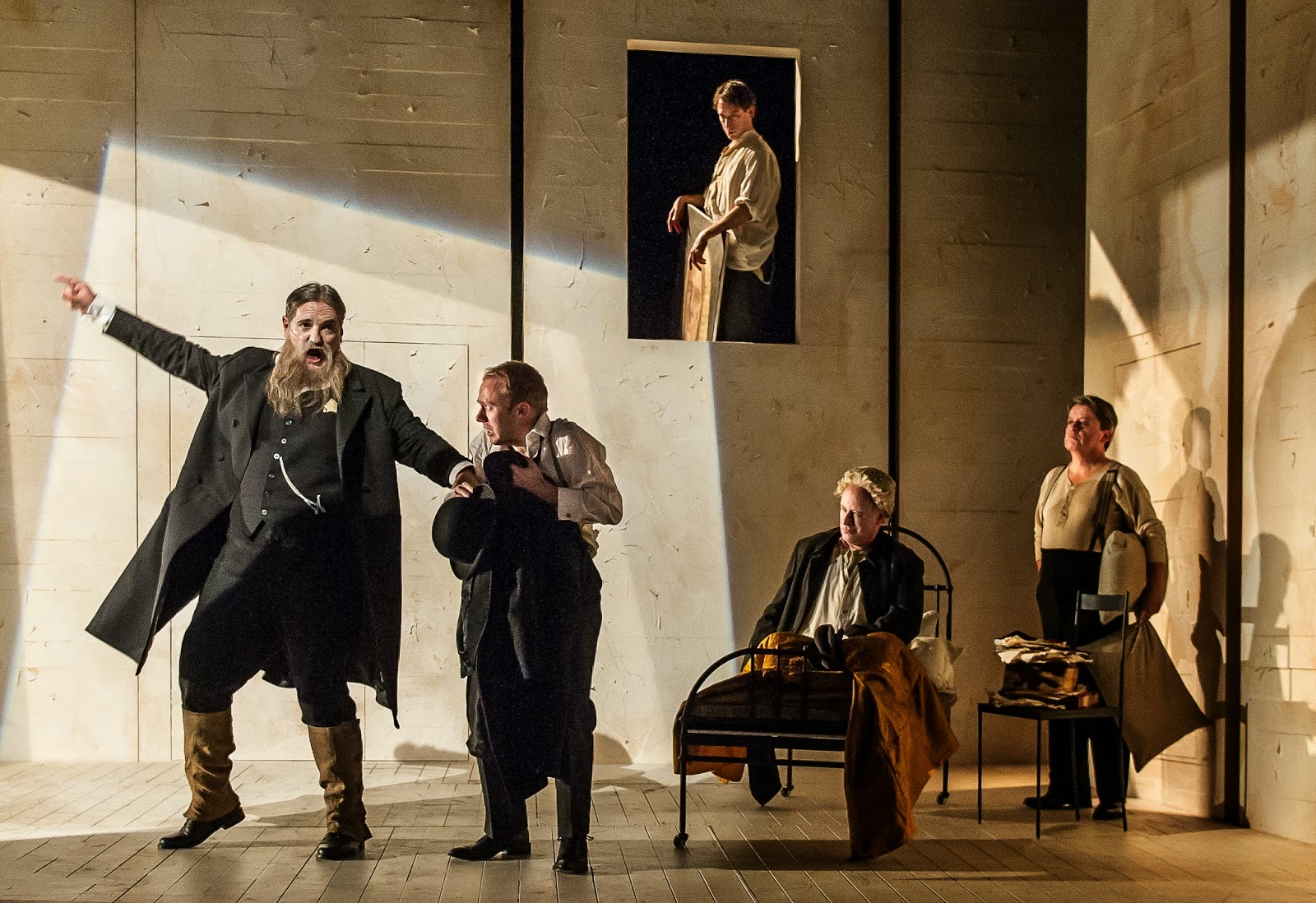 Kafka's The Trial, has such iconic status that any opera based on it carries huge expectations. The atmosphere of the novel is so unusual that it doesn't lend itself readily to ordinary operatic treatment. Glass's music, however, operates on the surreal dissociation that pervades the spirit of the novel. As we listen to the repeated sequences, our minds become innured to patterns. Glass's music expresses the existential angst of mechanical, impersonal systems. If Glass and his librettist, Christopher Hampton, had used the German title "Der Prozess" , the connection would be even more clear. Josef K (Johnny Herford) wakes up one morning and everything starts to go out of synch.  He knows something's wrong but goes along with things until he becomes part of what he didn't believe in.  It's reasonable that his Uncle (Michael Druiett) should help  but why strange women like Leni (Amanda Forbes) and a painter (Paul Curievici)?  Or oddballs like Block (Michael Bennett)  who any reasonable person wouldn't trust? As we become familiar with the cadences in the music, our minds start to follow almost by auto-pilot, and we're mesmerized, too.  K's problems start on his 30th birthday. A year later, he's dead. Or perhaps he's at last succumbed to the long slow death that is conformity to systems that have no real meaning. Once he slips into habits of non-logic, the process takes control.  Perhaps that's the real Trial Josef K is undergoing.  He hasn't committed a crime, he's just part of the irrational scheme of things. 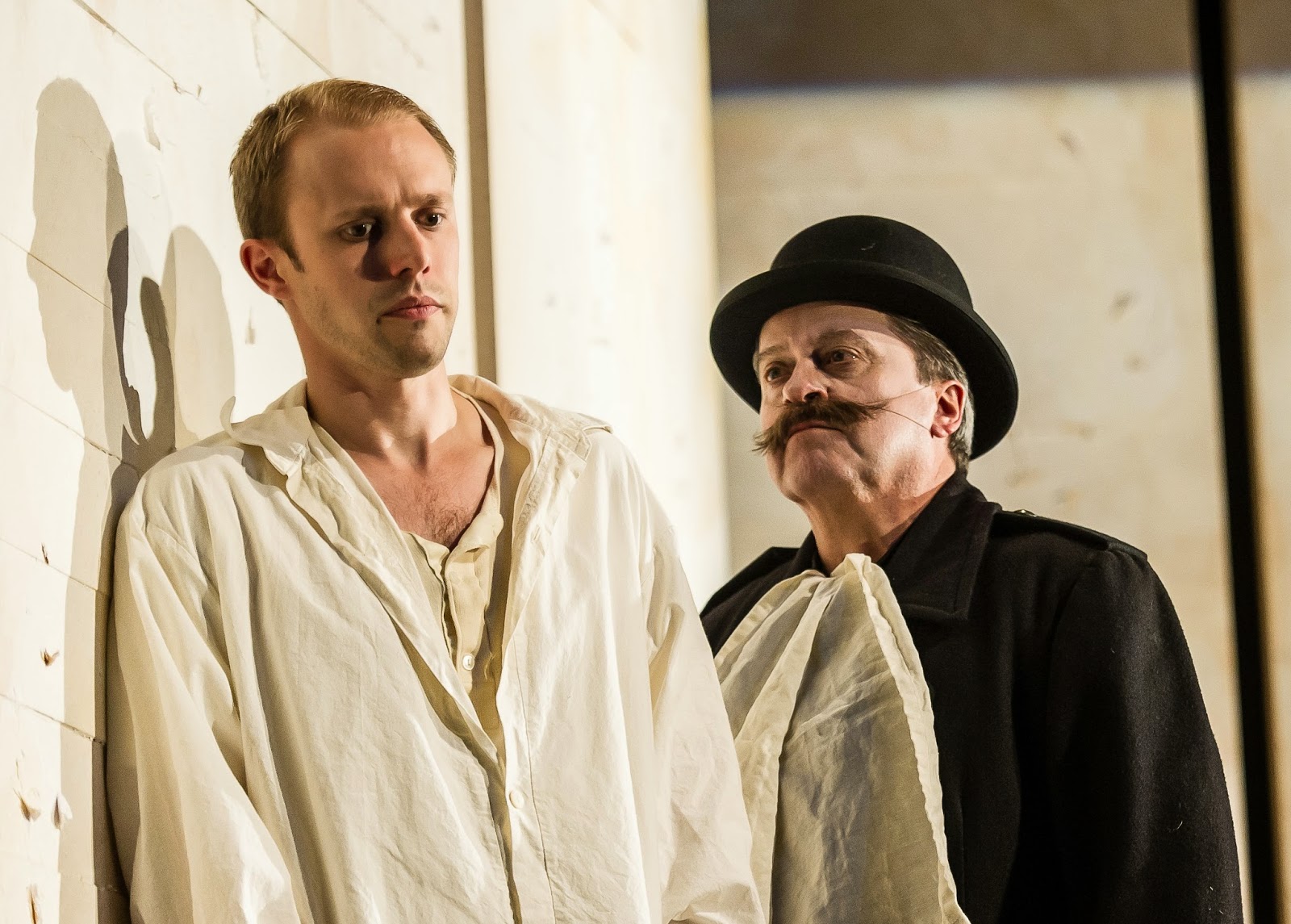 Glass's music wonderfully captures the mindless numbness of the processes around us. In In the Penal Colony (also based on a story by Kafka), an infernal machine drills words into the flesh of a prisoner. The concise nature of chamber opera intensifies the effect of Glass's music,  creating unbearable tension,  so concentrated that it might explain why some listeners switched off, emotionally. Please read my review of  In the Penal Colony HERE and my review of the audio-only recording HERE.  The Trial is more diffuse, involving more characters and covers a longer time span, So the impact is less extreme. The story is more or less familiar to all, which helps make it more accessible. The opera unfolds over ten scenes in two acts, in fairly symmetrical form, which also helps to distance the audience from the human tragedy. In the Penal Colony is a masterpiece, possibly Glass's finest work, but The Trial should prove much more popular.  By Glass's standards, the music is more concrete than usual, with many good "special effects" like  booming trumpet figures illustrating The Uncle, followed by wailing trombone illustrating young K. There are quirky jazzy waltzes and delightful figues on celeste and xylophone. Moderrn miusic without too much fear, but enough intelligence and integrity to satisfy high standards. 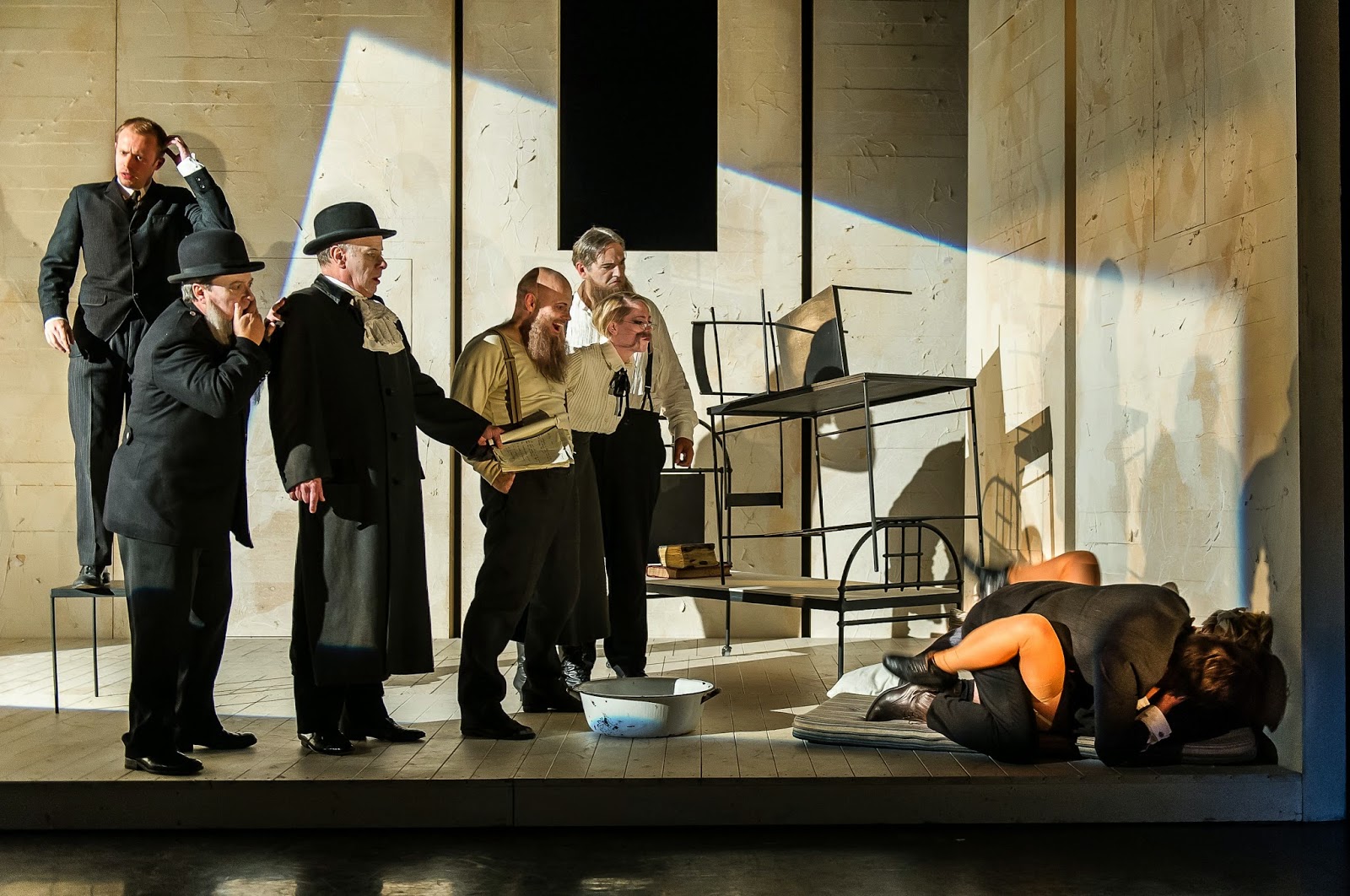 Johnny Herford sings Josef K. It can't be easy to create a character disintegrating from a rational man into automaton, but Herford is convincing. His voice has a good balance of rugged manliness and plaintive vulnerability. Even in the throes of his confusion, this K can break off for a quick snog!  Amanda Forbes sings Fräulein Bürstner/Leni, roles which make her switch from prim repression to  voluptuousness.  Forbes's sensual timbre makes one hear the woman behind the compulsive wanton. Leni sleeps with anyone. She's funny,  yet also someone deeply flawed, forced to play a role defined by men. she's not given to reflection, but Forbes shows her fragility by employing a good edgy tension to  her singing. Good performances too from Michael Druiett (Inspector/Uncle), Michael Bennett (Guard/Block), Nicholas Folwell (Guard/ Usher/Clerk/Priest), Rowan Hellier (Frau Grubach/Washerwoman) and Gwion Thomas (Magistrate /Lawyer). Paul Curievici (Painter/Flogger/Student) stands out in small roles: he's one of the better character tenors of his generation.  Michael McCarthy directed, with sets by Simon Banham. Wonderfully idiomatic playing by the Music Theatre Wales Ensemble, conducted by Michael Rafferty.

Philip Glass The Trial is a joint commission between the Royal Opera House, Scottish Opera and Theater Madgeburg.. Music Theatre Wales will perform it again in London until 18th October, and will then take it on tour. (More details here).  Glass's The Trial will also be broadcast on BBC Radio 3 om 25th October (available also online and internationally). Highly recommended !