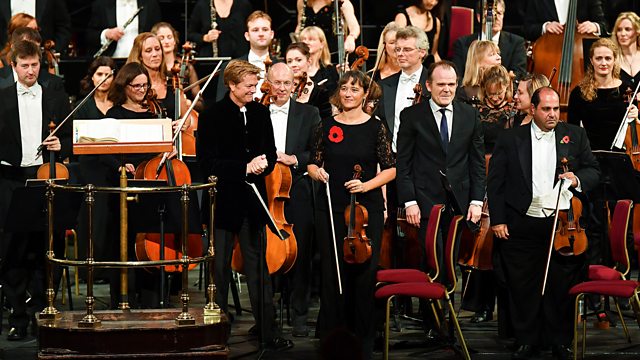 There's a place for Over The Top Berlioz, and the Royal Albert Hall, London was made for over the top. Berlioz Grand Messe des Morts op 5, 1837, is more grandiose than most requiems. Neither pious nor penitent, Berlioz's Requiem defies reticence. It packs a punch, and part of that punch is aimed against convention.  This performance brought out what made Berlioz so individual, very "modern" in his use of instrumental colour. The words may be religious, but Berlioz's God was, perhaps, himself.  That very audacity is what makes the Grand Messe grand. Conductor François-Xavier Roth did not stint on statement.  The BBC Symphony Orchestra stretched to the max: sixteen  timpani, ten pairs of cymbals,  twelve horns, four tubas, four bands of brass instruments and 18 double basses - dwarfing the usual most composers settle for.  Three large choirs: the BBC Symphony Chorus, the London Philharmonic Choir and the Crouch End Chorus and at the top, like a defiant angel, Toby Spence, whose clarion cut across the tumult before him.  In a small performance place, you'd risk going deaf.  Fortunately, the Royal Albert Hall is big enough to absorb the impact, and on BBC Radio3, the balance is even better.  Listen to the rebroadcast with speakers on loud.

Perceptively, Roth began quietly, the massed voices of the choruses at first hushed, then bursting forth "Requiem ! Requiem !", then receding, enriched by the bank of basses and violas.  So many voices, yet so perfectly together, such crispness of attack, such unity!  This precision liberated the inner rhythms in the lines, so the phrases moved with athletic energy. The first fanfare shone with vivid brightness. The Introit ended with glorious tumult, yet Roth kept the colours clear: I thought of flags, flying, and bright, vivid colours undimmed.  The Dies Irae was suitably hushed: it's a feat to keep so many voices together in close formation, without sacrificing clarity. But Berlioz doesn't stay somnolent. "Rex! Rex! tremendae!" marked with pointed brass exclamation points. Yet again, Roth used volume purposefully, not for mere noise value.  Excellent tension between moments of high excitement and more reflective minor key passages, like the Lacrymosa, where the voices hovered, the interplay between male and female voices sustaining contrast.  Vast as the orchestral forces may be, Roth employed them deftly, underlining but not overwhelming the voices.  The grand brass gestures exploded, the timpani pounded, always in step with the musical line. Not noise for the sake of noise but remarkably cohesive, as a good processional should be.

"Domine, Domine". The Offertory sounded haunted, for at this point in the Mass  the souls of the departed seek deliverance. Now the orchestra takes the lead, the"voice" of God in deep, resonant lines that pulsate, the quivering figures taken up by the strings, purposefully, I believe, for this is an evocation of a heartbeat, as if each soul were one to one with the Creator.  Vast chords led by brass  introduce the Hostias.  Roth's assertive approach made me think of Messiaen, who could shape blocks of dense sound so they swell up, referencing the cataclysm at the End of Time in which the Earth will be rent asunder.

When Toby Spence's clear, firm tenor rang out in the Sanctus, I felt a shiver, remembering how fortunate we are to have Spence at all.  Unless one has faced the Chasm perhaps one doesn't appreciate the miracle of life.  Conventional religion doesn't have a monopoly on the feelings expressed. When Spence sang the "Glorias" his voice softened, deepening slightly, suggesting humility. The Hosannas rang out fervently.  Triumph over death is not a given, so rejoice  when it happens.  Again, the great planes of brass sounded forth, the "last trumpets" prophesied in the Book of Revelation.  Roth emphasized the silences through which the Agnus Dei proceeds: powerhouses of sound  alternating with stillness. The choirs sang reverently, for at this point in a Requiem Mass, one contemplates the Lamb of God, who takes away the sins of the world.  Translated into non-Christian terms, this could mean sacrifice for higher spiritual ideals.  Hence the tenderness with which the choirs sang, and the deliberate, but not moribund traverse. As the timpani rumbled, we near a destination. This is what a Requiem is and should be:  a moment when we face mortality.  Perhaps there is redemption, perhaps not, but at least we've thought about what it might mean. All conductors employ silences at the end of performances. Sometimes it's cliché. François-Xavier Roth is an extremely intelligent and strong-minded personality.  He doesn't do things for show.  After this emotional and artistic workout, silence was a physical necessity. We couldn't otherwise return to the world outside.