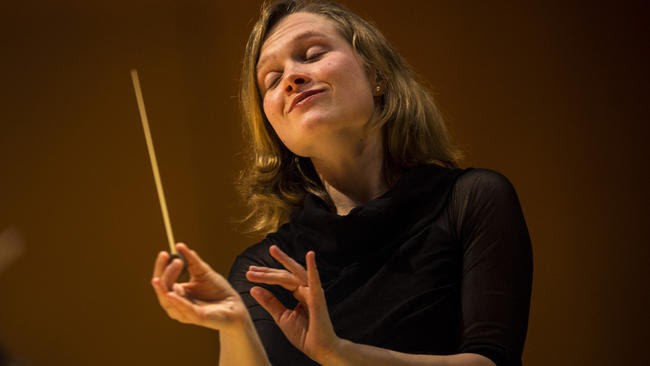 Mirga Gražinyte-Tyla conducted the City of Birmingham Symphony Orchestra in Mahler Symphony no 1, Haydn Symphony no 6 and the premiere of Raminta Šerkšnyte's Fire.  Mahler's First is often a measure of a conductor, lending itself to many very different approaches.  Gražinyte-Tyla's Mahler 1 was striking. The first chords rang out confidently : nothing tentative here. Although the "growing shoots" in this symphony are fresh and new,  they spring from a life-force so powerful that they cannot be curbed.   While not rushing, the orchestra soon gets into its stride. By the time the pounding figures come we're definitely "on our way". When the flute called out, it seemed to glisten, shining as if moist with dew.  The phrasing in the next section was delicately defined, so lucid that a very minor fluff in the playing stood out more than it might otherwise, but no matter.  In Lieder eines fahrenden Gesellen, a finch calls out "Ei du, Gelt!". (Isn't it a lovely morning).  So the young man's been jilted, but he gets over it by going on a morning hike, engaging with nature.  In this performance, I was surprised how beautifully the idea of "bells" infused the notes - the bluebells in the text singing invisibly, like their scent in the sunshine. Thus,the first of many crescendi in the symphony, flowing naturally, and with joy.  "Ei du, Gelt!". The timpani danced merrily, a subtle suggestion of Ländler physicality.

The Second Movement began gently, respecting the quotation "Auf der Straße steht ein Lindenbaum" from the last song of Lieder eines fahrenden Gesellen.  Reputedly, the scent of a linden tree is narcotic. The protagonist no longer worries, for all will be well. The music softens. "Alles, Alles ! Lieb und Leid, und Welt, und Traum".  But reverie is torn apart by sudden outburst.  Gražinyte-Tyla pushed the orchestra on, wildly wayward figures sweeping forth., giving way to more complexity.  Instead of Ländler, a much more sophisticated, mysterious waltz.  Again, the resolution is crescendo, horns and  trumpets leading the march forwards  The flickering, probing figures in the first movement resurface. The overall mood became darker, angular whips of sound suggesting tension. Gražinyte-Tyla carefully  shaped the run up to the final explosion, so it emerged gloriously, growing as a natural outcome from what had been building up before. A refreshing, invigorating performance,  clean without exaggeration, extremely well thought through.

The City of Birmingham Symphony Orchestra are superlative musicians, but what makes them distinctive as an orchestra is their sense of individuality.  They instinctively manage to choose Music Directors who have similar flair. This orchestra doesn't get "directed" so much as it grows, symbiotically,  with the conductors it likes best. Thus the inspired choice of Haydn's Symphony no 6 (Le Matin) with which Haydn established his rapport with the orchestra of the court of
Esterházy.  This performance gave the CBSO players chances to sparkle, as individuals, cohesion coming, I think, from mutual communication. Plus, the concepts of dawn and light connected beautifully to Mahler 1 and the symbols of Spring and renewal therein. Perhaps that's why I was so drawn to the flutes and flying strings.

The programme began with a new work, Fire by Raminta Šerkšnyte, and ended with an encore from Jonas Švedas (1908-71), both Lithuanians, like  Gražinyte-Tyla herself.
at November 17, 2016