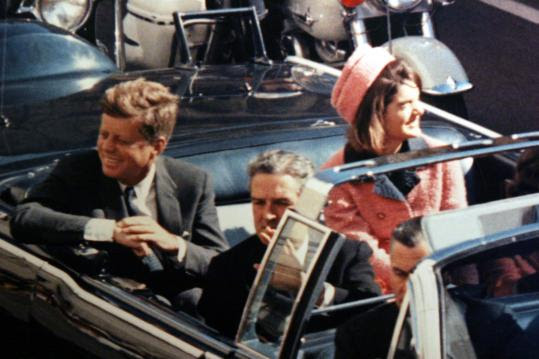 On this day in 1963, JFK was assassinated. How happy he seems here. A few moments later, Jackie would be crawling over the back seat of the limo, grabbing at fragments of his brain.  No one forgets where they were when they heard the news. I was at a school fun fair and suddenly everything went quiet, and people started going home. We thought Khruschev might  throw a nuke.  This time round, the Russians pull the strings and buy politicians to do their dirty work for them.  Some of the people JFK fought against, like the KKK, are back in again, too.

"Think not what your country can do for  you, but what you can do for your country".  Now, for some people, that very concept is meaningless. Now the object of power seems to be short-sighted selfishness and divisiveness. Clearing the swamp or legitimizing a cesspit?  JFK had his faults, but at least he cared about things other than himself.  His dreams were based on social conscience and communal responsibility.  How innocent those days seem now!  Will the spark JFK lit be now extinguished. In 1963, we were scared the world would end.  Fifty-three years later. we're closer to Armageddon than ever before. Below, Igor Stravinsky's response, to a text by W H Auden, conducted by Pierre Boulez, with Cathy Berberian.