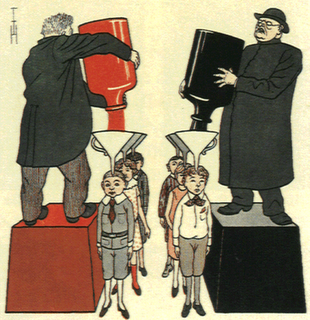 K A Hartmann Simplicius Simplicissimuss with Independent Opera at the Lilian Baylis Studio this week, with Stephanie Corley, Timothy Redmond conducting the Britten Sinfonia. This was the first ever staging in the UK, and for a good reason. Simplicius isn't really an opera at all and much of its pungency derives from the fact that it's written with some Bavarian dialect.  Hartmann's source was H J Chr. Grimmelhausen,  whose book Der Abenteuerliche Simplicismuss (1669), is set in  the Thirty Years War, one of the defining traumas of German history, and indeed world history, since it was the first truly global war, acted out in South America and Asia as well as in Europe. "Anno Domini 1618 wohnten 12 millionen in Deutschland" quotes Hartmann in his introduction. "Da kam der grosse Kreig". Thirty years later, only 4 million remained.  In  Hitler's Proclamation to the German  People, he invoked twelve years of humiliation and two million dead to justify Nazi control. The myth of "The People" legitimized the Third Reich.  By reverting to  Bavarian dialect, Hartmann pointedly underlined that there was no single "German People", and that, in any case, the German past was bathed in blood. 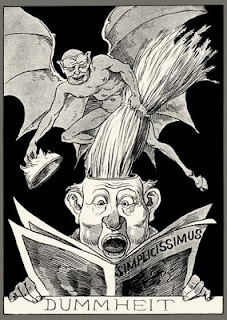 Until now, there has been no English translation but this is no demerit. If non-Bavarians have to struggle with the text, that's a good thing since it makes a difference to enter into the arcane, folksy internal logic of the piece. It is not "our" world but a lost world we need to make an effort to penetrate. Though it portrays the past, Hartmann's Simplicius is in no way naturalistic. The "roles" as such operate as symbols. The narrative lies disguised in the music.  Its disjointed character and embedded references reflect a fractured society falling in upon itself. There are hints of Catholic chant, of Jewish song and of modern music, all things the Nazis despised, wrapped in quaint pseudo-medievalism.  Significantly, Helmut Scherchen, champion of new music, worked with Hartmann on  the concept.  Again and again, Hartmann's contemporaries like Braunfels, Schreker and Honegger (all of whom I've been writing about for ages) used history for subversion, not as dreamy romance.  Nazis glorified nostalgia. Sharp-minded composers saw through the bluff.  Hartmann's angular lines are meant to grate, not soothe.  Hartmann's Simplicius is didactic: Brecht's ideas on theatre adapted to music, "imagined theatre" as Henze called it, concepts of music drama still evolving today. Please read my piece on Beat Furrer's FAMA HERE.

This has a bearing on performance, which is why I'm not at all convinced about naturalistic staging, whatever the period. A friend said of this Independent Opera production that the work might not have the cachet it has, had it been written ten years later. A perceptive comment, since it takes no brains to look back now on Nazi times. But there's a whole lot more to Hartmann's Simplicius than an anti-war narrative.  Hartmann's message is far more disturbing now that we may be entering troubled times where "the people" whoever they might be, are easily fooled by technological manipulation and demagogues without scruple. 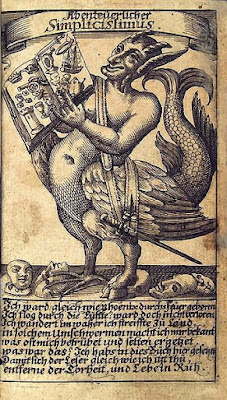 Simplicius is "Ein kleiner Bub bei den Schafen, kannte weder Gott noch Menschen, weder Himmel noch Hölle, weder Engel noch Teufel. Notice the pattern of opposite images, which flows throughout the opera. The text is set in rhyming couplets, typical of German tradition, and the music moves in a similar grave two-step. Simplicius is a "Holy Innocent", so pure he knows nothing of heaven or hell. In Tarot the Fool signifies someone who goes forth into the world without fear, facing danger but protected by his purity. Siegfried without the selfishness. Hartmann sets the part for high soprano though the role is male, to emphasize youth and innocence.

"Beware of the Wolf" warns the farmer. Wolf of course was Hitler's nickname, which he was rather proud of.  Simplicius doesn't know what a wolf is. so when the Landknecht  appears he thinks the Horseman is the vierbeiniger Schelm und Dieb the farmer warned about. "Weiss nit, Herr Wolf" cries Simplicius but the Landknecht attacks the farm and kills the Knän, die Meuder und das kleine Ursele (these archaic words give the piece a deliberate old-world air). A long passage describing the horrors of war, which ends with O armes geknechtetes Deutschland. Now Simplicius has wised up and heads into the forest where he meets a Hermit (another Tarot figure). The Hermit sings music like stylized monastic chant, wavering weirdly. He teaches Simplicius to sing Unser Vater (Our Father). Give us our daily bread". Simplicius, incorrigibly naive, asks auch Käs dazu? (and cheese, too?) Eventually the Hermit dies, leaving Simplicius to face the world alone. Provocatively, Hartmann writes into the death music an echo of the Kaddish.


After another powerful intermezzo,with swirling strings, plunging brass, evoking storms and storm clouds perhaps, Simplicius flies into the Governor's mansion. The soldiers boast of their tyranny and blaspheme. This chorus sound like drunken communal singing in a beer cellar, also a reference perhaps to the Nazis. This time Simplicius pipes up "that's no way to speak". "Can you hear the Mauskopf piepsen shouts the Governor. And of course, Simplicius's music is flute and clarinet. The Governor recites rather than sings, not Sprechstimme but something discordant, a lot like the speeches made where sense mattered less than sound. Some things don't change!  Then Simplicius speaks, at length. Words pour out at a shrill rapid pace, almost no time to take a breath.
Simplicius harangues the listeners, without music to soften the effect. As she finds her strength her words are supported by drums. A militant but not military march?  And why?

Suddenly, Simplicius's voice rises in song. Es dröhnt die Stadt, es stapft daher, schäumende bitt're Jammersg'walt.  She's joined by the chorus, now representing farmers. The music suggests march: an unnerving reminder that the victims of war can easily become perpetrators of another.  The peasants sing "Ein gleich Gesetz, das woll'n wir han, vom Fürtsen bis zu Bauersmann" but they kill the rich folks anyway. Is this a revolt? The peasants simply stand and stare.  What's changed?  Darkness falls. Simplicius stands by the corpses. "Gepreisen sei der Richter der Wahrheit!"  The peasants hum quietly, wordlessly. Does this signify smoke or unthinking acquiesence? The Specher reminds us that by 1648, 8 million Germans were killed, nearly a quarter of the population at the time.  The music erupts in manic march. Is the cycle repeating? 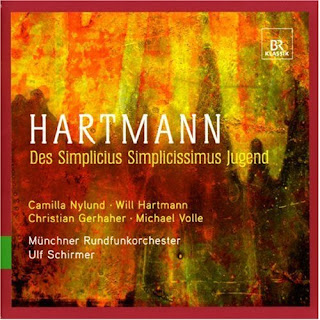 Hartmann's Simplicius might well be something left unstaged, or minimally staged, since it is theatre of the mind.  In times when The People's Will takes precedence, maybe the mind, or the conscience preserves an individual, as Hartmann discovered in his "internal emigration".   I've written a lot on  Simplicius Simplicissismuss and on other works by K A Hartmann over the years, and also about other composers of the period. Please use labels below and at right.  Two recordings of Simplicius stand out : Heinz Fricke from 1985, and much better and punchier, Ulf Schirmer conducting the Münchener Rundfunksorchester with Camilla Nylund, Michael Volle, Willi Hartmann and Christian Gerhaher in 2009.  I have also heard Markus Stenz from Netherlands Radio, it's no match for  Schirmer and the idiomatic Munich style.
at November 18, 2016