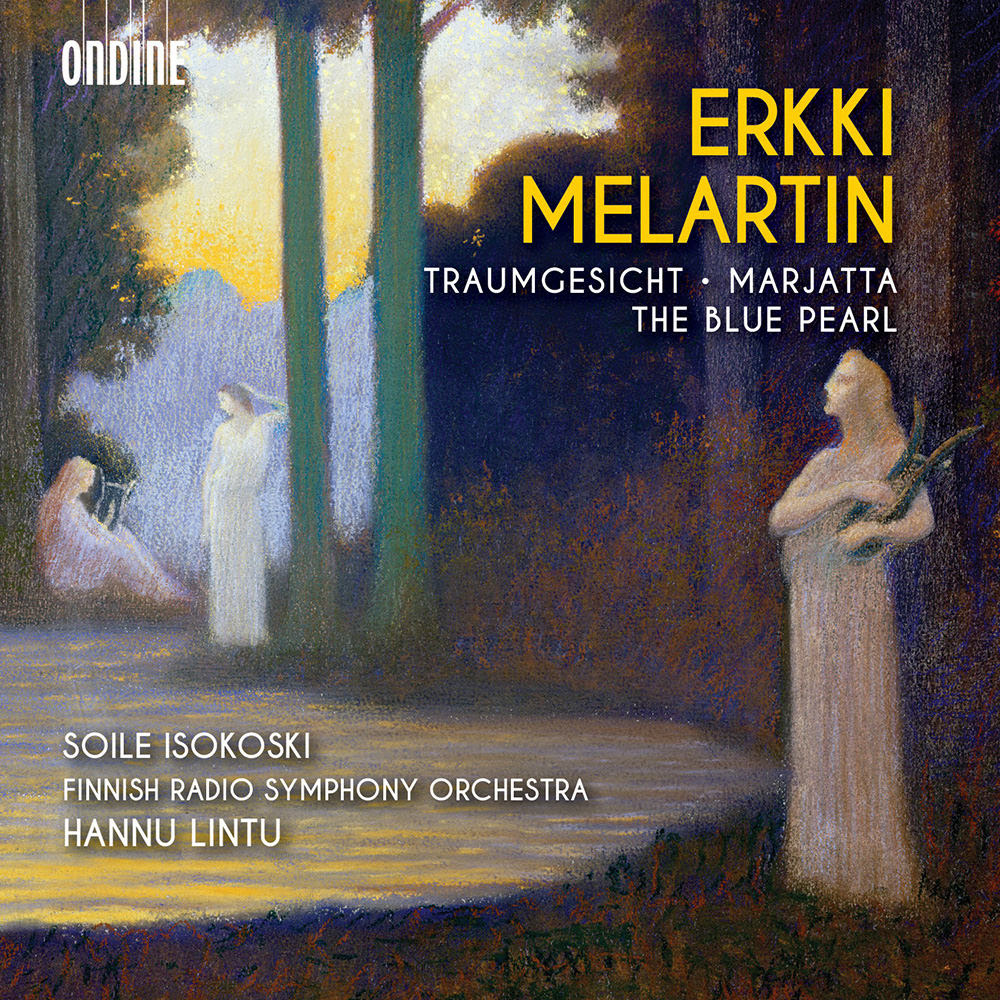 This recent release of works by Erkki Melartin  (1875-1937) from Ondine, with Soile Isokoski and Hannu Lintu conducting the Finnish Radio Symphony Orchestra, will further enhance the revival of interest in Melartin's music which has been building up in the last twenty years.  Melartin's work has been extensively researched, revealing rarities like the three pieces on this disc: the tone poems Traumgesicht and Marjatta and the ballet The Blue Pearl. "Whereas his symphonies are firmly rooted in the Germanic tradition", to quote an article in the Finnish Music Quarterly, these works "show his orchestral writing in a more colourist and virtuoso light. It would appear that working with a freer form inspired him to bolder stylistic experiments in the 1910s in particular."

Melartin's Traumgesicht op 70, 1910, was performed seven times then lay forgotten for more than eighty years.  It's a compact piece, where ambitious ideas are condensed in tight focus, intensifying their impact.  This "Dream Vision" is a vividly painted tableau. The richly sweeping strings set the pace, building to expansive crescendi that might evoke a panorama of endless possibilities. But the crescendi crash into turbulence, cleared away by gentler, minor key melodies, led by woodwind.  Perhaps this dream takes place in a metaphorical dense forest, with clearings for reflection and changes of direction.  Large forces give way to a solo violin, leading the orchestra further. Washes of colour, lit by tiny, whip-like figures, reminicent of Sibelius and his evocations of snow and wind.

Soile Isokoski has been singing Melartin for decade :  her Soumeni suloksi disc from 2000 remains one of the finest introductions to Finnish art song, and with all respect to Karita Mattila, Isokoski has probably done more for Finnish song since, perhaps, Aino Akté, for whom Melartin's Marjatta (op 79, 1914) was commissioned.   Marjatta is based on the final canto in the Kalevala, where  Väinämöinen orders Marjatta's new-born son (fathered by a lingonberry!) to be put to death, but is thwarted when an old man appears, baptising the child, declaring the child the new King of Karelia.  Väinämöinen's old ways are no more and he skulks away, vowing one day to return, but leaves a kantele "for the children of Suomi". The connection  between Marjatta and Sibelius Luonottar (1913), also commissioned for Aino Akté.  Luonottar describes the creation of the universe, Marjatta the end of the mythical saga. The connections are so obvious that it's more than likely that Melartin was positioning himself directly in relationship to Sibelius. Marjatta shimmers with the sounds of cuckoo song, emphasizing springtime and renewal.  Fluttering figures in the strings suggest winds, or new growth.  Flutes, violins and celesta combine, creating a delicate, fragile mood of hope. The warmth of Isokoski's singing suggests that this new Karelia will prosper.  At the end of Marjatta, Melartin gives the singer one grand climax heralded by trumpet calls.  But how one longs for the truly extraordinary genius of Luonottar and its ferociously imaginative challenges!  Musically, there's no comparison.  Perhaps Marjatta is a follow-on from Melartin's opera Aino (1912) which I remember from way back, though I haven't listened to it for a while.

More cuckoo songs in Melartin's The Blue Pearl, Sininen helmi,  op 160, premiered 1931. In the South Seas, a princess is captured by an octopus who wears a blue pearl in his crown.  Eventually, she's rescued by a prince, but not before we get blissfully lyrical music: sparkling piano passages, harps, flutes, and very high violin tessitura. On this recording, we have eight numbers from the first two acts of the three act original, which probably don't give a sense of narrative but work perfectly well as miniature tone poems, and display a lighter, more lucid Melartin than the early symphonies, or perhaps the existing editions/recordings thereof suggest.
at November 06, 2016