Shakespeare re-imagined for the very Late Baroque, with Bampton Classical Opera at St John's Smith Square.  "Shakespeare, Shakespeare, Shakespeare....the God of Our Idolatory".  So wrote David Garrick in his  Ode to Shakespeare (1759) through which the actor and showman marketed Shakespeare to new audiences, fanning the flames of "Bardolatory". All Europe was soon caught up in the frenzy.  Fairies, nature spirits and the supernatural inspired the transition between the orderliness of the Enlightenment and the wild, revolutionary spirit of the Romantic Age.  This delightful yet thoughtful concert from Bampton Classical Opera  contrasted two pieces, both from 1776: Thomas Linley's Ode on the Spirits of Shakespeare and Georg Anton Benda's Romeo and Juliet,  showing how two very different composers responded to Shakespeare in their own, original ways.

Georg Anton Benda (1722-1795)  was a member of a family well-connected to the German musical establishment.  His Romeo und Julie was a three-act "ernsthafte Oper" a Singspiele with prose text by Friedrich Wilhelm Gotter, who also adapted The Tempest.  Benda and Gotter subscribed to the principles of classical antiquity as perceived in their time, dramatic values that predicated on the unity of time, action and place. Thus Shakespeare's Romeo and Juliet was pared down, Benda's Romeo und Juliet focusing on the key characters. Bampton Classical Opera presented a half-hour version of Benda's original, revolving around Juliet (Clare Lloyd-Griffiths) and Romeo (Thomas Herford). Laura (Caroline Kennedy) duets with Juliet, and a single Capulet (Richard Latham) stands in for the feuding families. The choruses (as in Greek drama), sung by Cantandum, thus provide backdrop and commentary.  Lloyd-Griffiths, substituting at short notice for Rosalind Coad, was very well cast.  She has an attractive, bright timbre that captures Juliet's youth and purity.  In the recit and aria, Juliet is already contemplating death "I am trembling with such joy and with such fear....See, the moon turns pale...." 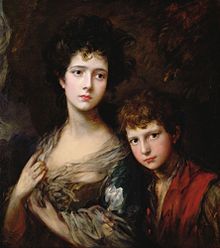 Thomas Linley (1756-1778) was part of the English theatrical and artistic establishment. His father was a famous actor; his sister, also an actress, was a muse of Thomas Gainsborough and married Richard Brinsley Sheridan.  Unfortunately Linley died so young that part of his mystique rests on what he might have been had he matured. Linley's A Lyric Ode on the Fairies, Aerial Beings and Witches of Shakespeare adapts a text by his teenage schoolmate, who also died young.  Its hyberbolic exaggeration  thus represent the enthusiasm of youth.  The Spirit of Avon (Clare Lloyd-Griffiths)  and Fancy (Caroline Kennedy) are memes in an allegory, not fleshed out-personalities as in Shakespeare or, indeed, most opera.

Linley's Ode began with an overture, very much in a formal style, but more salon piece than Handelian public opera.  Gilly French conducted the Bampton Classical Players, on period instruments including harpsichord,  with antique horns and trumpets, positioned at each side of the stage.  The Englishness of the aesthetic came over well.  "O guardian of that sacred land, where Avon's wood-crowned waters stray" sang the chorus.  Though the Avon in question would be Stratford-on-Avon,  as there are references too to Arden, it may or may not be significant that the Linleys had connections with the Avon of Bath and Bristol.  Thus the Spirit of Avon (Lloyd-Griffiths) addresses Greek detiies advising them that "Shakespeare now demands your lays"  As the Spirit of Avon, Lloyd-Griffiths had more with which to demonstrate her range.  Lloyd-Griffiths is also interesting because she's very English, (though she may be Welsh) and The Spirit of Avon is a kind of Britannia.  English sopranos are a distinct Fach, an aesthetic that's much under-appreciated. Lloyd-Griffiths reminds me of Lucy Crowe. Caroline Kennedy, as Fancy, also has a bigger part, and used it well. Although the mood in the First Part of Linley's Ode glorifies Shakespeare's birth like a divine act (witnessed by Jove himself),  darker mysteries creep in. What to make of the "sordid wishes of the grov'ling crowd that chain the free-born mind"?

In Part II of Linley's Ode, the Fearful Observer (Richard Latham)  sings of the id-like world of the night where "with feeble cries the gliding spectres throng".  Linley responds to these sinister images with vividly dramatic figures, even spookier because they're conjured up with small ensemble and the timbre of period instrumentation.  French and her orchestra rose to the occasion, playing with animated vigour. But dawn breaks, and spells are broken.  The Spirit of Avon announces peace, since these horrors were created by Shakespeare's art.  "For who can wield like Shakespeare's skilful hand, that magic wand, whose potent sway the elves of earth,of air, of sea obey?"  Yet Linley's not just looking back. He sets the final lines with mischevious glee:  "Oh, give another Shakespeare to our Isle".

St John's Smith Square is a gem of the English baroque: an ideal setting in which to experience Bampton Classical Opera in London. And much else, besides! SJSS is one of the hidden secrets of London's cultural life.