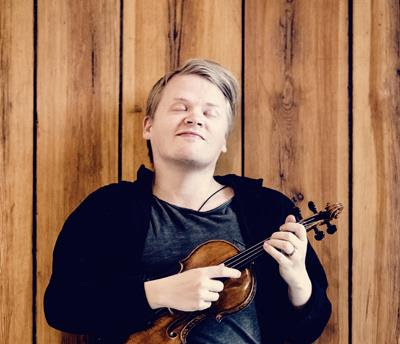 A very different Prom 20 featuring Jean Sibelius with Pekka Kuusisto, Thomas Dausgaard and the BBC Scottish Symphony Orchestra.  Not the famous Sibelius Symphony no 5 op 82, but the first version, from 1915, in four movements. The first performance was a success, but Sibelius, ever his own sternest critic, wasn't satisfied and continued to revise it until 1919. During the 1980's and 90's, research into Sibelius's original source materials made it possible to reconstruct a performing version of this early score, based on orchestral parts and notes from the period. The premiere recording was made in 1995 with Osmo Vänskä and the Lahti Symphony Orchestra. Over the years, this version has come to be appreciated for its own sake, not just as a novelty, but for its originality. Thomas Dausgaard's approach was convincing, bringing out the exploratory character of the piece, acknowledging that, for Sibelius, the work had a long genesis. Moreover, Dausgaard framed this performance in context, pairing the symphony with the Violin Concerto, and rather more unusually with Finnish folk music and orchestrated versions of folk tunes.   The Prom sold out fast on the strength of the symphony's popularity, (and Kuusisto's charisma) but in many ways it's more interesting to hear how the composer's
creative processes develop.

The first moments of Sibelius' Violin Concerto in D minor op 47 emerged, organically,  from the folk songs that went before  (kantele, harmonium and three voices), Kuusisto's violin singing, as if were the embodiment of some ancient spiritual force. How plaintive it sounded, almost on its own, defining theme with great assurance, as if in defiance of the orchestra until the strings enter en masse.  The many variations of tempo and direction test the soloist, but Kuusisto's fluency showed how well the piece flows The reiterations towards the end of the allegro moderato were so vibrant that the orchestra seemed carried along with its energy. A particularly  moving second movement enhanced the third. Yet again,  Kuusisto managed to balance poise with flamboyance : his feel for Sibelius is deeply intuitive, bringing out the quirky originality which made his music so distinctive.  Kuusisto could not do boring, even if he tried.  A pity that on the broadcast, the announcer broke into hysterics, shouting loudly before the music really ended. Completely destructive. Send this one to cover football.

A set of orchestrated songs based on themes by Sibelius provided a prologue to Sibelius Symphony no 5.  Not "traditional" but tradition adapting modern art music.  In this 1915 version of the symphony, the "stepping impulse" and "rocking impulse" described by Eric Tawaststjerna give thrust to the first movement, this character being retained in the final version, though the details are less defined, the second movemnt, a scherzo, not yet integrated.  On the other hand, this emphasizes the experimental nature of this version, still germinating in the composer's imagination.  The "stepping impulse" makes emotionalas well as musical sense : tiptoes into the unknown, so to speak.  The strong chords that follow all the more expansive and alluring.  When I was a kid, I visualized a tiny figure creeping into strange, dark territory, getting bolder and braver.  Thus is achieved the final movement, the Allegro commodo section sublime "with the wind in its sails", as I used to think. Another flurry of "stepping impulse", Sibelius in full flow, rushing forwards. The Largamente molto section in this version is slightly more tentative but Dausgaard kept the overall thrust, so when its destination is acheived, it felt natural.