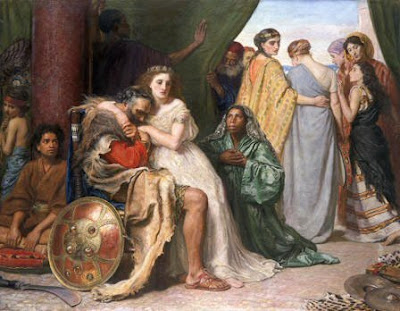 Handel's Jeptha at the Proms - this time with Richard Egarr and the Scottish Chamber Orchestra.  read Claire Seymour's review HERE in Opera Today :

"In this swift and sometimes rather stern Proms performance by the Scottish Chamber Orchestra and SCO Chorus, conducted by Richard Egarr, such moral and theological issues were essentially by-the-by; and, as Egarr strove for energy and momentum perhaps, too, some of the work’s human anguish was glossed over, and the emotional interaction between the protagonists in this tragedy-turned-triumph weakened. But, this was still a compelling account, characterised by superb choral singing and the direct communication of events by a well-matched and accomplished team of soloists.
I haven’t always found that Handel’s oratorios and operas ‘work’ well in the Royal Albert Hall: last year’s Theodora (also with a libretto by Morell), for example, was somewhat lacking in dramatic impact and propulsion. On this occasion, sensibly, what I described as the ‘exquisitely beautiful poise and sensitivity’ of the period-instrument Arcangelo was replaced by the more urgent, impulsive and vibrant sound of the Scottish Chamber Orchestra - a sound which carried with more vigour, with punchy accentuation, strong dynamic contrasts and strikingly dark colourings at times, though Egarr ensured that the strings’ bowing was idiomatically stylish, and the tone did not lack Baroque bite."