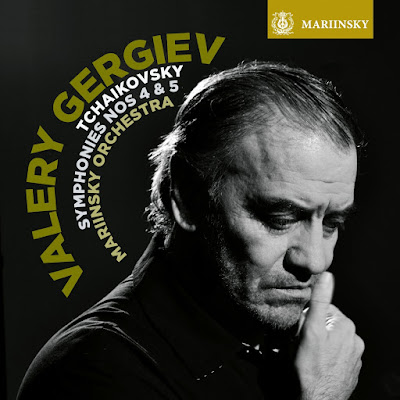 Valery Gergiev and the Mariinsky Orchestra with Tchaikovsky Symphony no 4 in F minor op 36 and Symphony no 5 in E minor op 64 from the Mariinsky's own label.  Gergiev has conducted Tchaikovsky numerous times, often with interesting approaches, and with many different orchestras over a long period, but his rapport with the Mariinsky is very close. Together they've done Tchaikovsky so often that most of what they do is worth hearing. This performance is fairly well known, recorded at the Salle Pleyel in January 2010, it has been released on DVD and previously on CD together with Tchaikovsky's Symphony no 6, which is being re-released separately.  This new release is an opportunity to focus on the relationship between the fourth and fifth symphonies.

Tchaikovsky's Symphony no 4 was written in the same period as his opera Eugene Onegin.  An admirer sent him a love letter and precipitatively they married. The experience was a disaster : the composer allegedly attempting suicide to escape. Life reflecting art. This intensity comes through in Gergiev's bleak approach.  In the opening fanfare, the "Fate" theme is  defined with uncompromising forcefulness. Bright "daydream" figures ("daydreams") but overwhelmed by strident brass,  the "Fate" theme re-asserting itself with full force. In the second movement, an adantino, Gergiev finds tenderness, but here, too, the mood is tinged with melancholy. It represents memories now firmly in the past.  The oboe sings alone, surrounded by shadowy strings which surge with heartfelt pathos. With its array of strange images, the scherzo represents a puzzle. The composer wrote to Madame von Meck, that when the imagination is released, it runs untrammeled.  Thus the sense of liberation in the finale, the brass augemented by percussion and clashing cymbals, before the main theme returns, now assertive and defiant.  Gergiev is at his uninhibited best.

The first movement of Tchaikovsky's Fifth is brooding, but gives way to a purposeful march,  which, introduced by clarinet and bassoon, opens out expansively, taking into its sweep various minor themes, before receding back into funereal hush.  Gergiev shapes the outburst before the conclusion with such power that the hush seemed poisoned, even baleful. The andante cantabile thus felt haunted, long, slow strings stretching, framing the horn solo, here beautifully done, at once wistful and serene. Clarinet and bassoon, and later strings, take up the melody, supporting before the "fate" fanfare wells up, underlined by timpani. Yet the melody, and the  horn, re-appear, and the orchestra surges once more before subsiding into silence.  Gergiev and the Mariinsky strike a good balance between glorious melody and the darkness around it. The brief Valse is an interlude, like the scherzo in the Fourth Symphony, whose apparent insouciance is cut short by the tense ostinato of the last chords. This serves to highlight the intensity of the finale, where the "fate" theme with its pounding, running figures lead the orchestra into grand surge, swelling and passionate.  Gergiev and his orchestra shape the brass chords firmly, electrifying their solemn portent.  In the triumphant march, these "fate" chords become integrated into the affirmative whole,  with a majestic fortissimo and fast paced presto.  No more funereal gloom : the final coda explodes with vigour.