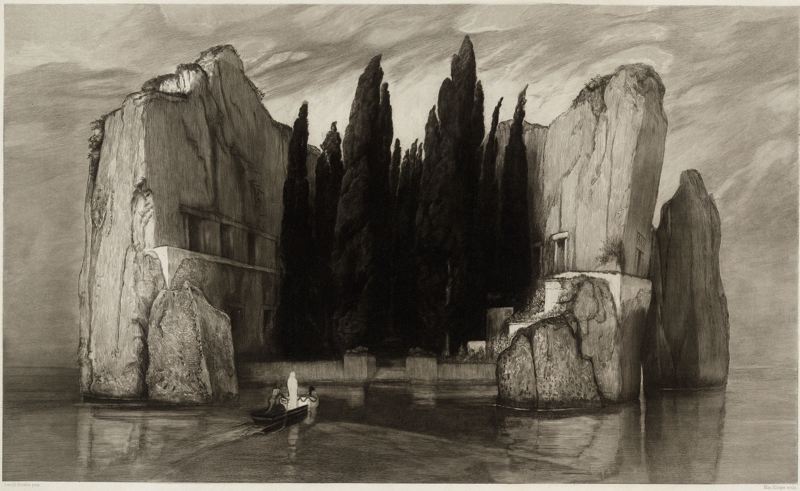 John Storgårds and the BBC Philharmonic Orchestra, Prom 22, with Rachmaninov, Shostakovich and Outi Tarkiainen's Midnight Sun Variations. Storgårds kept up standards at the BBC PO during a  fallow period under Juanjo Mena, so it was a bit of a surprise to see he didn't get get named Chief Conductor. Fortunately, Omer Meir Wellber is pretty good, as his Haydn Creation Prom last week demonstated - I loved its flair ! Storgårds remains Chief Guest at the BBC PO. The orchestra was sounding very polished and alert.

A good Rachmaninov Isle of the Dead. Though this piece is often described as "romantic" it's more Romantic, in the sense that it connects to concepts of Romanticism - symbolism, the unconscious, alternative reality.  Rachmaninov knew the series of illustrations by Arnold  Böcklin, made in the 1880's , depicting an island rising from the sea. Its cliffs are so steep that nothing quite like this can exist in nature : Landscape painting, this is not, by any means.  This is the Island of the Dead, perhaps on the river of Lethe, as in ancient myth, through which the dead are rowed b y a mystery boatman.  The island is uninhabited : the white shrouded figure is en route to the Underworld.  Böcklin’s image was inspired by a dream. Any Freudian will note : images of death, and rebirth together, and a sense of inescapable doom. Storgårds's approach emphasized the mood of strange foreboding.  In the quiet rhythms, one might imagine oars, steadily making their way through the waters,  and in the sudden swell of the strings, the cliffs looming above, the descending figures a reminder that life is fragile.  Though the surfaces in the rock like, Storgårds focussed on the shifting textures rather than the architecture, creating the piece as an almost-impressionistic wash of colours and strange harmonies. It's worth remembering that Rachmaninov was a contemporary of Claude Debussy and of Stravinsky.

In the context of this particular Prom, though, the connections included Sibelius, particularly his Symphony no 4, with its brooding darkness. After the previous night's all-Sibelius Prom (please read more here) Storgårds conducted the London premiere of Outi Tarkiainen's Midnight Sun Variations. The publishers Edition Wilhelm Hansen Copenhagen quotes the composer that the work is "about the light in the arctic summer night, when the northern sky above the Arctic Circle reflects a rich spectrum of infinitely-nuanced hues that, as autumn draws near, are once again veiled in darkness; when Europe’s biggest and most unpolluted wildernesses, the tundra and dense coniferous forests mystified by Jean Sibelius in his last large-scale work, Tapiola (1926), are bathed in countless shades of light. The work begins with a sparkling ray of sunshine: the orchestra radiates and rises, playfully traces its round and goes back to the beginning again. Solitary wind solos soar above the orchestra, softly proclaiming the peace of the summer night to answering sighs from a horn. A new beginning finally emerges in the strings: a chord beating with rugged primitive force that fills the whole space with its warmth. This sets off a pulse of constantly remixing chords that ultimately fires the whole orchestra into action, until the strings break away, ascend to the heights and impart maybe the most important message of all".

Although it's inspired by landscape, this is as much inner landscape as external. I liked this piece because it works as music on its own terms, from within, rather than created from preconceived concepts.  Undulating swathes of sound, evoking spatial distance, layers of detail, providing texture and colour.  I thought  of Kaija Saariaho, but Tarkiainen's palette is closer to the natural colours of Lapland, than to Paris.  Life there must be simpler and more down to earth.  The swathes of sound swirl, evoking perhaps a sense of parallel reality, where past and present, seen and unseen might co-exist.  At eleven minutes Midnight Sun Variations does not outstay its welcome, a mistake some composers make when they're trying too hard. I like this spareness,like the fragility of life in a tough climate. A surprisingly good companion for Rachmaninov  Isle of the Dead !

Shostakovich's Symphony No 11 in G minor 'The Year 1905' is a public piece, which won Shostakovich the Lenin Prize. The subject matter
is unashamedly patriotic, commemorating the December Revolution which was suppressed but entered the political mythology of that Soviet State. There's nothing in principle wrong with propaganda music, but much of the appeal of this symphony lies in the way it plays on emotions to whip up excitement,  and the avoidance of doubt.  With its vivid images, it feels like the soundtrack for a movie.  on closer listening, though, it's as much atmospheric as belligerent. Storgårds approaches it as a tone poem, emphasizes the subtler aspects. Muffled drums, long, flowing lines that could be anything - gunsmoke, the earth,  the Russian "soul", whatever, but effective on purely musical terms. Impressionism on a grand scale . A perceptive approach, different from the technicolor extremes some still associate with Shostakovich, but ultimately more rewarding.